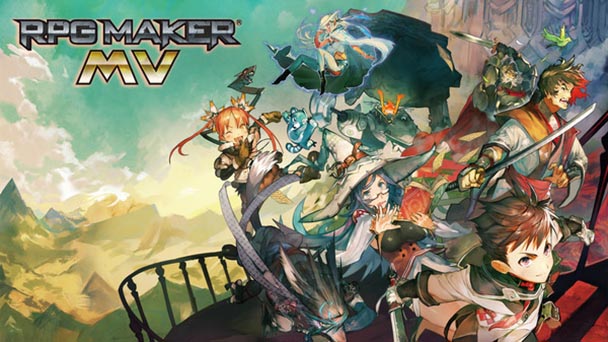 A growing body of software imparts an imperative message: game design can be even more gratifying than gameplay. From Minecraft, LittleBigPlanet, Disney Infinity, and most recently Super Mario Maker, there’s been a succession of diversions that bestow a digital toolbox, allowing budding designers to create and share constructions of their own design. After years of exploration in the worlds built by others, these aforementioned games provide an outlet for creativity and experimentation, with dividends rooted in the mastery of tools and implements.

RPG Maker MV advances the idea further, forgoing any type of immediate gratification conferred by prebuilt levels. Instead, the app functions as an elaborate toolset, allowing dedicated designers to craft protracted adventures that rival the complexity and score of PSOne-era role-playing game. Naturally, targeting the level of polish exhibited by Suikoden, Grandia, or Chrono Trigger is going to take a herculean amount of time and energy. But knowing that’s its possible, might be MV’s biggest lure. 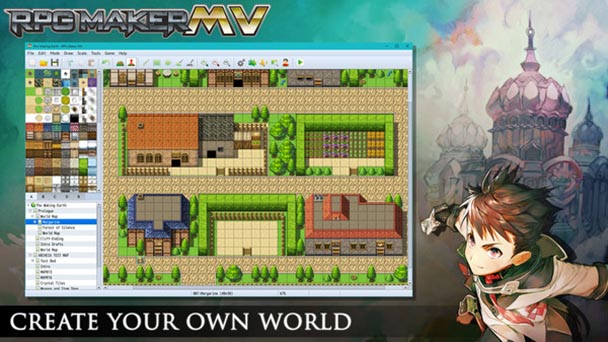 After downloading the 1.5GB app, don’t expect a lot of handholding from the developer. Although the ‘help’ tab in the main menu links to an online guide which covers the fundamentals of design, you’ll either have to experiment or use online compendiums to implement basic role-playing functions like random encounters. Fortunately, there are a large number of written and video tutorials out there for RPG Makers’ predecessors- most of which applies to this new iteration.

That’s not to say RPG Maker MV doesn’t usher in any major advancements, but it does so without upsetting the modular approach used by past iterations. Most of the improvements will be pleasing to returning RPG Makers, with the applications new availability on iOS potentially welcoming a new consistency of creators. Another new advancement is the increase is the number of ways your project can be enjoyed. No longer limited to Windows .EXE files, RPG Maker MV games can be played on Mac, iOS, Android and even in web browsers. In execution, consistency across platforms is commendable, although party pathfinding on mobile is limited to short distances. MV’s 50% increase in resolution (to 816×624 pixels) is certain to find favor with developers, allowing for increased fidelity and character expression. Small embellishments like sprite layering and automatic shadowing are poised to delight map-makers as well. 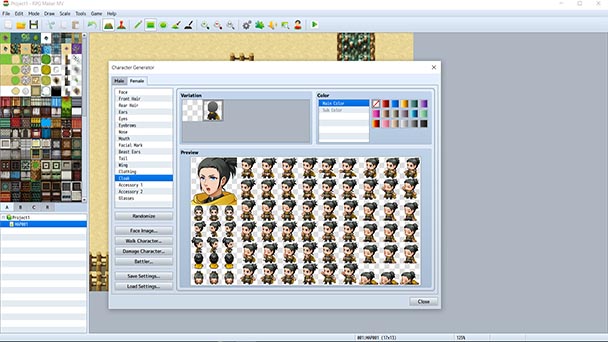 For dedicated developers, one of MV’s biggest amendments is the move away from the Ruby Game Scripting System (RGSS), which had been a mainstay since its inclusion in RPG Maker XP. Now, the app uses JavaScipt, which offers a new advantages. First, JavaScipt is a much more popular programming language, making it easier to find online guides and contract coders. In execution, it’s also exponentially speedier that Ruby, and allows for effortless integration of .JS files via MV’s plugin manager.

With its expandability, RPG Maker MV is an immensely powerful toolset. But with that lofty potential also comes the danger of becoming lost in the minutia. That’s exactly what happened when I began to build my envisioned magnum opus, repeatedly getting entrenched in the Character Creation suite. While VX Ace offered a straightforward way to create your own party members by layering bitmaps, distinction was buried in the recesses of pull down menus. With MV, users can select from dozens of on-screen templates, instantly seeing the changes to both character portrait as well as their super-deformed sprite. 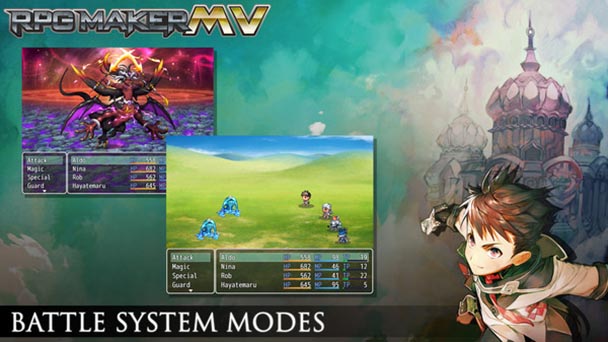 Should you require more that the fantasy or contemporary-themed clothing options (there’s about eighteen for each gender), you can import your own sprites. Sadly, in the interest of stimulating downloadable content, MV offers no pixel-level editor, which is disappointing for anyone hoping to have a feudal-era or steampunk cast using the apps’ default toolset.

Restrained flexibility extends to MV’s mapmaking functions, where players can create their own environmental from a compendium of fantasy and urban-themed titles. Here, layering is the new addition, with user able to stack bitmaps up to three levels deep. While the basic set of tiles is still a bit meager with six main packs, resourcefulness with layering can lead to the illusion of variety. Get past the obstacle of homogeneity, and MV is up to the task, extending an advantageous set of drawing tools that can expedite map-making. Nicely, the developers included a hundred pre-drawn samples, where tile-tweaking tips can be gleaned. 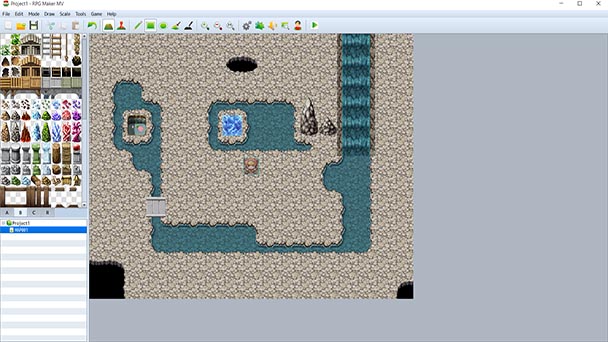 Without doubt, developers will spend most of their time poring over MV’s database, which now supports up to 2,000 items across its tabbed categories. It’s here that the bulk of RPG-building will occur with users establishing the main party, character classes, skills, weapons, enemies, triggers, music, and even the terminology used in game menus. Delve in here and a number of key options can be changed, such as MV’s option for traditional front-view or new side-perspective battles. Most important is the integration of events- which regulate everything from in-game conversation to determining what’s inside a treasure chest. Essentially, Events can be thought of a series of conditional questions, asking where, what, whom, and how a situation is handled. Thankfully, each of these can be tested to ensure functionality, potentially preventing any game-crippling oversights. Agreeably, MV brings back the Event Searcher, allowing for RPG-building without the need for a stack of design docs nearby.

Gradually, your creations begin to take shape, and when they do, there’s a sense of unrivaled gratification. After playing years of other people’s explorations, seeing and playing your own undertaking, where every minute detail has been meticulously manipulated is an extremely fulfilling experience. Whether you can persist this perseverance and make the next To The Moon, Lisa, or Corpse Party is completely up to you, with RPG Maker MV giving you a substantial selection of tools to make these ambitions a reality. 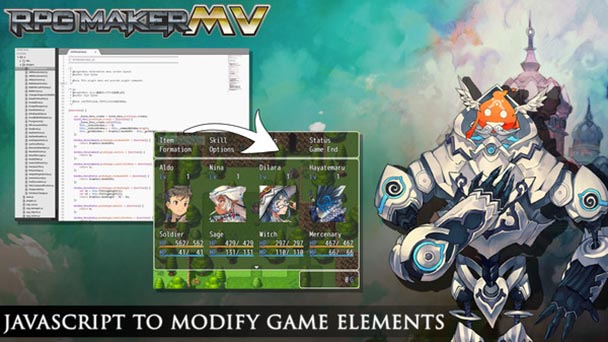 RPG Maker MV was used on the PC with review code provided by the publisher.

RPG Maker MV
Platform: PC
Developer: Kadokawa, Yoji Ojima
Publisher: Degica
Release date: October 23rd, 2015
Price: $79.99 via Steam
RPG Maker MV review
A growing body of software imparts an imperative message: game design can be even more gratifying than gameplay. From Minecraft, LittleBigPlanet, Disney Infinity, and most recently Super Mario Maker, there&rsquo;s been a succession of diversions that bestow a digital toolbox, allowing budding designers to create and share constructions of their own design. After years of exploration in the worlds built by others, these aforementioned games provide an outlet for creativity and experimentation, with dividends rooted in the mastery of tools and implements. RPG Maker MV advances the idea further, forgoing any type of immediate gratification conferred by prebuilt levels. Instead,&hellip;

Summary : While considerably more expensive than its predecessor, RPG Maker MV allows you to make the PC, Mac, mobile or HTML5 role-playing epic that’s been reverberating around your head.