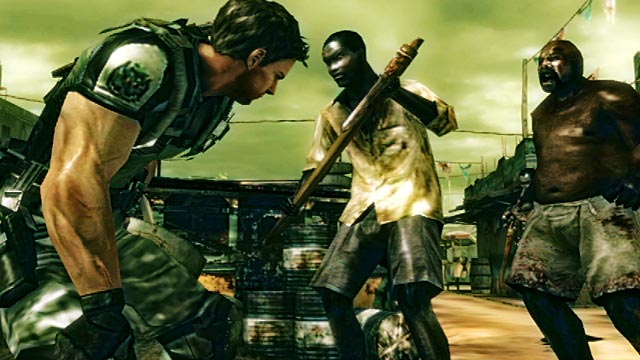 For years, the Resident Evil franchise seemed content to remain in the refuge of the survival horror genre. Sensing stagnancy (and circumventing a contractual obligation with Nintendo for numbered series entries), Capcom began taking its property in new directions. 2003’s Resident Evil: Dead Aim incorporated light-gun elements, while 2004’s Outbreak dabbled with on-line, cooperative play. Yet, it was the fourth iteration in the franchise which really offered innovation- transforming the game into a tight third-person action title.

Recent release, Resident Evil: The Mercenaries 3D continues this trajectory, adapting an unlockable score-attack mode from RE4 into a full-fledged portable title. Abandoning a storyline, the title’s focus is less about impetus and item management that gunning down as many of Los Ganadosas as possible within a condensed time span. Thanks to this bite-sized approach and a sensible control scheme, Mercenaries competently fills a gap in the 3DS’s burgeoning library. 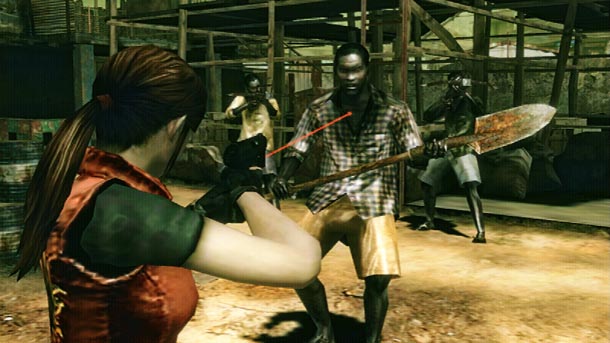 Prudently ditching the traditional touchscreen aiming method of many DS shooters, the game’s movement mechanics allow players to have a firm handle on the action. With the analog stick used to walk around, a press of the left trigger toggles weapon aim, a control scheme which isn’t prohibitive to southpaws. Unlike most recent Resident Evil games, Mercenaries allows a bit of movement while firing; pumping lead into an encroaching enemy while backpedaling becomes a survival skill in some of the game’s more challenging trials.

Smartly, the game’s inventory system has been simplified from its console counterparts- now players can easily select any armament with stylus poke or a few presses of the directional pad. Additionally, each of the game’s eight characters have their own unique arsenals- from Chris Redfield’s pistol and dual-grenade launcher to Jill Valentine’s SMG and shotgun loadout. By spending 3DS Play Coins, players can even swap weapon packs between characters. Beyond firearms, players also carry a healing spray and two types of grenades, both are which are essential when dealing with large clusters of foes. 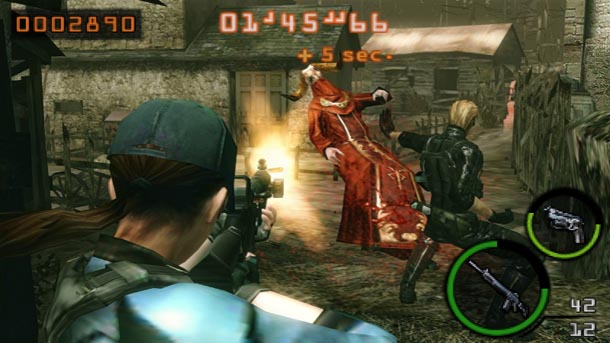 Initially, Resident Evil‘s traditional fallback tool, the knife, may seem like it can’t compete with the formidability of a ranged weapon. Upon closer inspection, the dagger reveals Mercenaries 3D‘s melee system, which rewards players with a time bonus for hand-to-hand kills. For many stages, a dwindling timer is the gamer’s greatest threat, making melee’s an essential element for success. Mercifully, players have other benefits at their disposal- such as the carrying up to three perks into each battle, which can augment your reload time or defensive capacity. To motivate players into returning to Mercenaries‘ menacing environments, additional abilities are unlocked at regular intervals.

The title’s landscapes are rendered with a pleasing amount of detail, and the framerate is consistently solid, however, one graphical flaw reminds gamers that they are playing on a portable system. Although adjacent foes move fluidly, antagonists in the distance animate much less gracefully. Dispatched opponents topple clumsily to the ground, instead of displaying even a rudimental ragdoll physics model. Mercenaries other blemish centers around its level design, which stretches an extended  tutorial across at least half the game’s orthodox missions; combos aren’t even introduced until the ninth maneuver.  While the game does deliver harder, unlockable EX mission, players will get the feeling that a high percentage of stages won’t deliver enough of the game’s goods. While some might complain about the cartridge’s inability to reset a game save, only those who need the reassurance of their achievements should be affected. 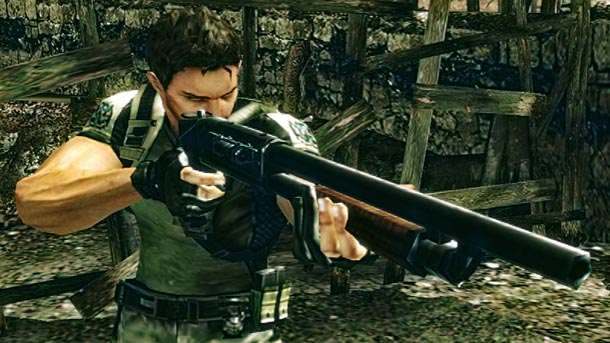 With a library dominated by pared-down console ports, seeing Resident Evil: The Mercenaries 3D nearly provide the quality of a console title will be a reassuring triumph for 3DS owners. More importantly, the title admirably fills a conspicuous hole in portable’s library, providing an occasionally addictive, enjoyable game which is idyllic for on-the-go play.

Previous: Ms. Splosion Man Review
Next: New Releases For the Week of July 24, 2011