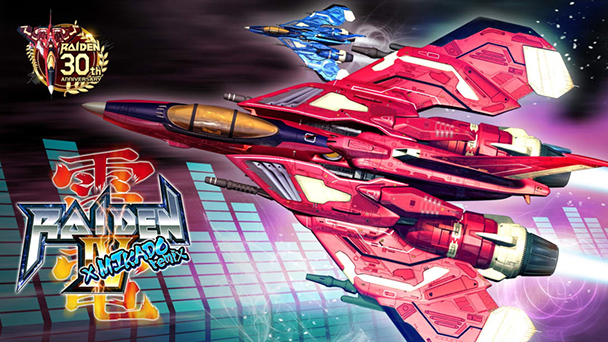 Seibu Kaihatsu/MOSS’ Raiden franchise has earned its place in the STG pantheon, thanks to meticulously polished play and that iconic plasma laser. This definitive edition stives to improve on an already distinguished shooter, with several supplements making Raiden IV x MIKADO remix a standout Switch shoot ‘em up. 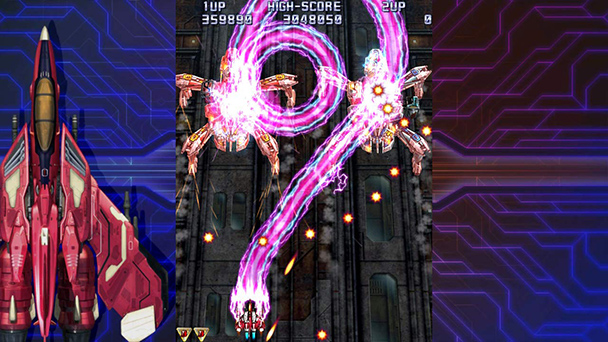 Following disappointing cabinet sales with 1989’s Dynamite Duke, Seibu Kaihatsu’s developmental budget shrank. Recognizing the lower production costs of crafting scrolling shoot ‘em ups, the team began work on Raiden. Upon its release, the coin-op earned critical and commercial acclaim, reinvigorating the developer and subsequently generating two sequels and a trio of spin-offs. But the reversal of fortune didn’t endure, and by 2005, key developmental staff had left Seibu Kaihatsu. In the aftermath, MOSS was formed, and after securing the rights to the franchise, would go on to create Raiden III, IV, and V.

The latter arrived on Switch in 2019 in the form of a Director’s Cut. The game’s visuals, which boasted attractive interpretations of futuristic New York, Europe, and the Middle East, was impressive and play didn’t disappoint series fans. But for the first time, Raiden felt like it was suffering from feature bloat. A cheer system where online participants could root for players seemed superfluous. But the worst aspect was the inclusion of stilted English dialog that simulated radio chatter. Too often, it overpowered the game’s energetic soundtrack.

Purchase the digital copy (or the Japan only physical edition) of Raiden IV x MIKADO remix and you won’t have to worry about conversation ruining the game’s score. Here, players can opt for the original soundtrack or a remixed version curated by the famed Game Center Mikado. Fortunately, these aren’t amateur tracks reinterpreted by fans. Most feature long-time Raiden composer Go Sato in some capacity, either as part of the Sato Go Band or as part of the Heavy Metal Raiden (alongside Mikado manager Ikeda). Other pieces are from Muchimuchi Pork and Death Smiles II’s Daisuki Matsumoto.

While every contribution is technically proficient, the new soundtrack isn’t always unified. Sato Go Band’s “Can’t Replace” breathy synthwork channels the soaring comeback of an early 90’s anime protagonist and is brimming with luminous optimism as it builds to a tender crescendo. COSIO’s “Tragedy Flame” opens with a Eurobeat cadence, setting the tempo for projectile dodging. Meanwhile, Heavy Metal Raiden’s “Go to Blazes” ditches the typical hammering for a thrash sound. Having met a few Raiden fanatics, the Mikado remixes may not be cohesive, but they reflect the musical infatuation of Raiden’s fanbase. While some might prefer hard-hitting metal anthems and other appreciating reverberating synth-driven arpeggios, a passion for music runs throughout the audience. 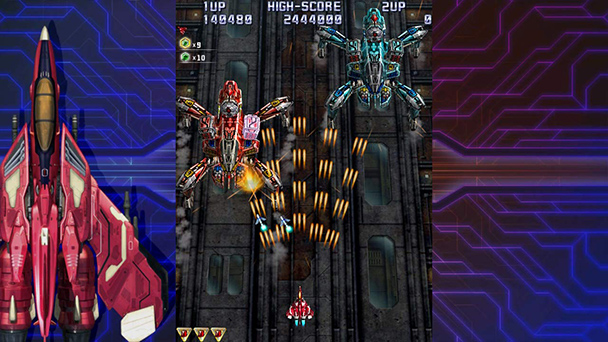 As great as the remixed soundtrack is, it’s hardly the package’s sole addition. There’s a ship viewer that let’s players view, rotate, and zoom in on 81 different crafts, including the bosses across the game’s seven-stage trek. When you’re dodging bullets, it’s difficult to notice the details that go into the design. But the ship viewer demonstrates how the game’s enemies can adopt different forms, with elements like additional guns emerging from the body of numerous ships, reflecting the attack patterns of elevated enemies.

Like H2’s Raiden IV: Overkill, this iteration includes the two additional stages, and adds the Raiden MK-II and Fairy player ships which were sold as DLC in the original console release. Overkill mode is still present in MIKADO remix, permitting score-chasers to pile on additional damage for extra points, earning a prime spot on the online, global leaderboards. One helpful method to getting on the scoring hall of fame is to study replays, with the game able to record and play back your game. Sadly, replays are local-only; there’s no way to scrutinize the point-earning proficiencies of others. 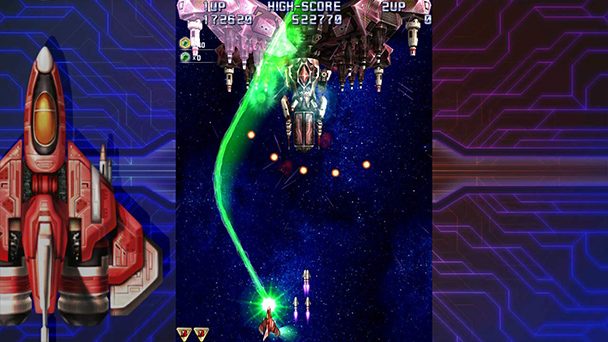 Whether you tackle Raiden IV in Overkill, Additional, or Arcade Mode, you’re able to play individually or cooperatively. Having a friend is undeniably helpful, effectively doubling your firepower. The game can accommodate local pairs with tate screen orientation, each player holding their own Joy Con horizontally. But neither the controllers nor screen is large enough to be truly functional.  Even when played on a large monitor or television, it can be difficult to distinguish between yellow projectiles and gold score pick-ups.

While the practice difficulty removes enemy bullets from play, Raiden IV seems poised to frustrate newcomers. Even with the difficulty set to Easy, enemy bullets travel at a very high rate of speed one you confront the first boss. But for anyone with a bit of skill in the genre, Raiden IV is mostly manageable and gradually adding additional continues as you practice. 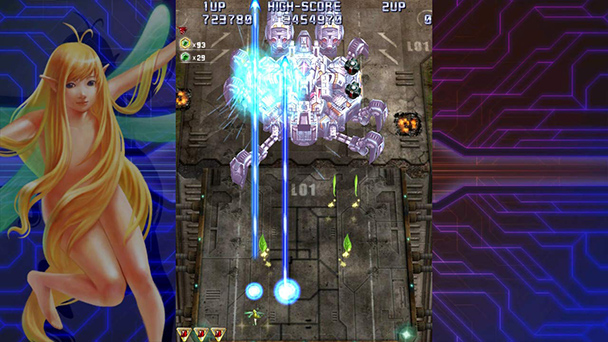 Stick with it, and you’ll eventually discover a favorite weapon among the game’s spread shot, laser, and spread laser. The latter is Raiden’s signature offensive device, coiling and twitching about like an infuriated snake. IV provides players with two different behaviors for the weapon. You can opt to have it encircle foes or break off and split, leaching the health from enemy ships.

Like the original release, Raiden IV pares the STG to its essential elements. Beyond picking up the color-cycling power-up to augment one of the three weapon systems, you’ll find secondaries that add additions like homing missiles. Each floats around aimlessly on the top half of the screen, luring you in with its abilities, like some kind of seductive siren. While the game might overwhelm with the speed and number of on-screen bullets, it never subdues players with overcomplication. Instead, Raiden IV exudes confidence with its attractive backdrops, timeless mechanics, and hulking bosses. Wonderfully, the Switch is more than capable of mimicking the action of the Taito Type X hardware, exhibiting a stunning 60 fps delivery. 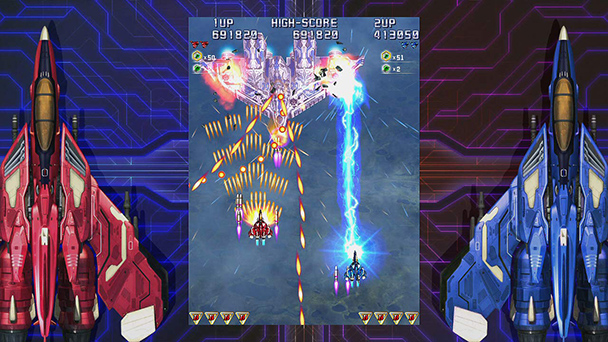 Although Raiden IV x MIKADO remix will only justify a second purchase by the franchise’s most fervent fans, this definitive package is ideal for those who don’t already own the game. All too often, STG releases can be tragically succinct, with arcade ports that lack the extras that audiences appreciate. But MIKADO remix offers nearly all the essential trimmings, save for interviews with MOSS’ development team.

Raiden IV x MIKADO remix was played on Switch
with review code provided by the publisher.

Summary : Boasting two additional stages that weren’t present in the arcade version, a trio of playable ships, and a gratifying alternative soundtrack, Raiden IV x MIKADO remix is a undisputable winner that will satisfy STG fans.