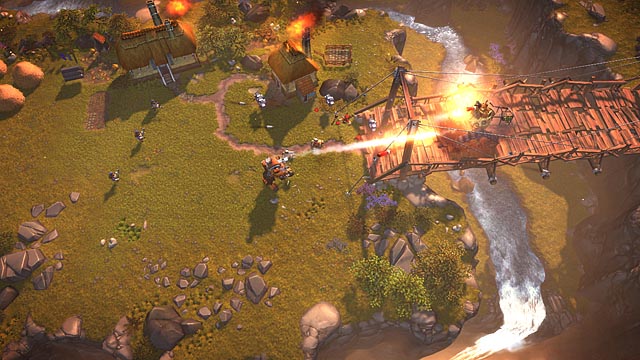 Over the last two decades, appreciation for twin-stick shooters has followed a reoccurring cycle of admiration and apathy. Once the darling of arcades with titles like Robotron: 2084 and Smash TV, scoot-and-shoot games struggled to convert their mechanics onto single-stick consoles. With the rise of the dual-analog controller, Geometry Wars ushered in a resurgence, until the genre succumbed to oversaturation in the last year.

The harbinger of an upswing just might be found in recent Xbox Live Arcade release Gatling Gears. Although the title doesn’t attempt to revolutionize the twin-stick shooter, the game’s intense, focused action recalls the genre’s prime. With a pedigree linked to both Killzone developer Guerrilla and W! Games (Greed Corp.), is not surprising that Gatling also exhibits an remarkable amount of polish, flaunting a buttery-smooth framerate even when the screen is bursting with shrapnel- spewing explosions. 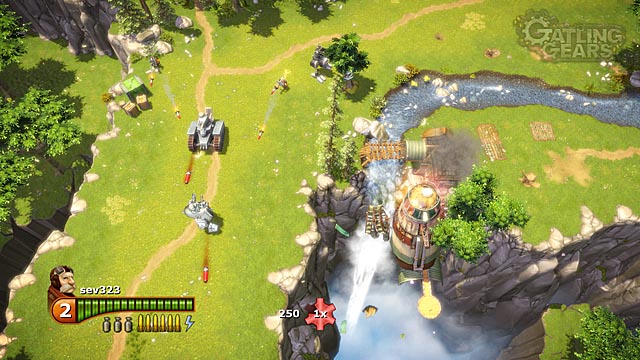 Set in Mistbound, the same steampunk realm of Greed Corp., the game’s locale articulates the tension between fertile flora and the ambitions of the exploitative Empire. Players assume the role of Max Brawley, a reluctant war hero, who drawn back into the cockpit of a mech to defend his homeland. The majority of the title’s exposition is articulated through dialog between Brawley and his granddaughter, which offers a pleasing narrative impetus, without slowing Gatling‘s pace. Additionally, urgency is cleverly expressed through the game’s environments which alternative between lush rivers and ravished landmasses crumbling into oblivion.

Smartly, the game’s action displays a similar level of detail. Complying with twin-stick convention, players control their mech with the left stick, while the right stick initiates ballistic output  in the direction it is pressed. With Gatling‘s eponymous weaponry having a relatively short range, gamers will have to rely on their three other offensive armaments to surmount the main campaign’s thirty stages. A press of the right trigger initiates a cannon shot capable of crossing the entire screen, while a tug of the left trigger calls for an artillery drop. Aiming a mortar round temporarily relinquishes movement of your mech, as players paint their targets; ideally, the title should have offered an option for auto-aiming. While players are given a limitless supply of ammo, both cannons and artillery have a cool-down period, prohibiting players from exploiting their battlefield brawn. Lastly, a smart bomb destroys every minor foes on-screen- although players are given a score bonus for not using the attack. 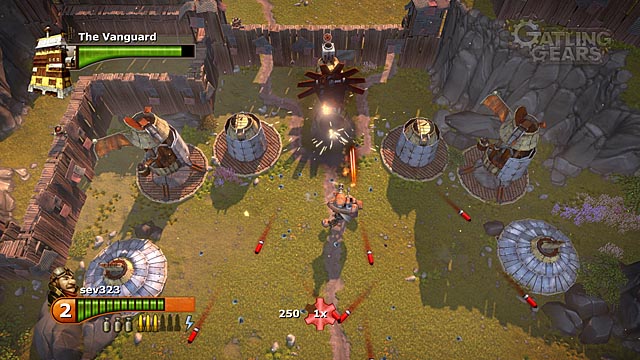 Killing each foe reveals silver, spinning cogs which can be collected to bolster a player’s combo multiplier. Cultivating a stratospheric score offers more than just bragging rights on the game’s online leaderboards. Points are converted into experience which can be used to purchase mech skins and even jovial pets which dutifully trail your mech around each stage. Beyond the game’s core campaign, Gatling Gears also offers a survival mode where players defends assets from waves of encroaching enemies. With intuitive drop-in/out cooperative play and lag-free netcode, the title’s online performance practically mirrors a local game session.

Gatling Gears undeniably delivers the goods- offering one of the most sumptuous looking, delightfully intense, twin-stick shooters in recent memory. While fans accustomed to the diversity delivered by contemporary action games might find the title a bit tedious, anyone who has spend after afternoon dropping quarters into Ikari Warriors or Total Carnage will cherish Vanguard Games handiwork.

Previous: LEGO Pirates of the Caribbean: The Video Game Review
Next: New Releases for the Week of May 15th, 2011