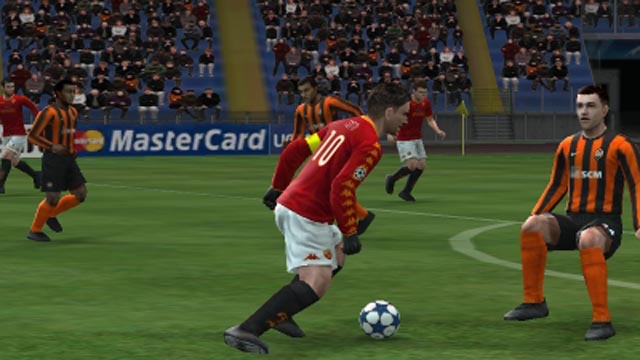 Historically, sports simulations on portables have been at a distinct disadvantage. With limited processing power and diminutive screens, pocket-sized system struggle to deliver the spectacle offered by their home-based brethren. Traditionally, Nintendo owners have incurred another difficulty by being forced to extort diagonal directions and control on-screen characters with a thumb-numbing directional pad. By taking advantage of the 3DS’s capabilities, recent release Pro Evolution Soccer 2011 3D remedies most of the misgivings associated with playing on the portable pitch, forging a footie title which compares favorably to its console processors.

Essential to the title’s proficiency is the 3DS hardware. Directing athletes with the analog nub lessens finger fatigue, and permits athletes to aim their passes and shots with increased precision (although getting the ball to the intended player when teammates are clustered together can be wonky). With the unit’s visual capabilities, polygonal athletes are fluidly animated and well-rendered, recalling the visual fidelity of a late sixth-generation soccer game.

By default, PES 2011 3D defaults to a low, behind the player’s shoulder, camera angle. Although this perspective requires players grow accustomed to a spinning viewpoint, seeing a hooked shot float flawlessly into the distance may warrant the transition time. For traditionalists, there’s always the sideline or goal-oriented camera, if gamers aren’t bothered by pygmy-sized players. While these perspectives don’t offer the same vibrancy when the 3D switch in engaged, they make playing defense more intuitive, as an athlete’s trajectory doesn’t have to compensate for the rotation of the camera.

Beyond the fundamentals of shooting, passing, and tackling, PES 2011 3D also offers supplemental moves through button combos. Once players master the basics, they can command athletes to trap the ball, initiate feints, and adjust the elevation of a chip shot,  producing a non-stop highlight reel against inept opponents. Regretfully the game omits a tutorial, requiring ambitious players to study the nuances of the game with an instruction booklet laid out before them. Meanwhile the touchscreen is relegated to coaching strategies, allowing teams to switch formulation on the fly. Regretfully,  taking your eyes off the action to initiate a right-side attack means you’ll eyes will have to refocus before 3D can be enjoyed again.

PES 2011 surrenders a sufficient selection of sixty national teams and 160 clubs to choose from. While player names and likenesses are mostly intact, teams names have been omitted and logos fictionalized. Edit mode allows players to tweak with many of the data, although the title lacks a ‘create-a-player’ component.  Beyond exhibition games, players can instigate a 32-team UEFA championship tournament, manage the day-to-day front office tasks in Master League mode, and engage another player in a local, wireless match. Notably absent is any kind of career mode, which you control a single player in a quest for fame, fortune, and a bevy of endorsement deals.

Despite a few omissions, Pro Evolution Soccer 2011 3D is an undeniably impressive inaugural effort, ordained to challenge EA’s inevitable efforts. At its core, the game’s recreation of  the sport easily straddles the chasm between  light diversion and simulation, delivering a solid title for footie fans. With a bit of bolstering in the offseason, Pro Evo could potentially regain the level of respect once cultivated in the franchise’s halcyon heyday.

Previous: New Releases for the Week of May 1st, 2011
Next: Drop Like It’s Hot- Section 8: Prejudice Review