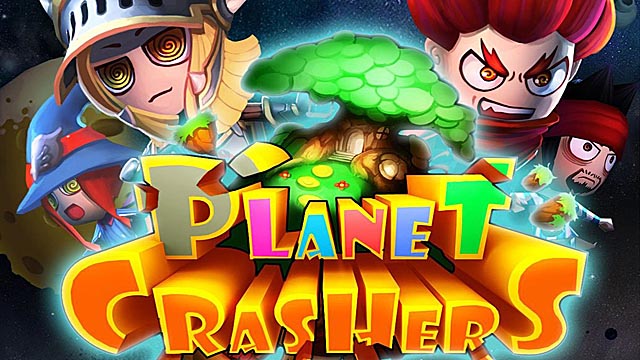 What is the concept? Capitalizing on the current dearth of role-playing titles for Nintendo’s autostereoscopic handheld, recent eShop release Planet Crashers sends players on an eccentric expedition in an attempt to salvage a weakening sun. Built on UTV True Games’ previous smartphone and web-based iterations which offered unassuming brawling atop colorful spheres, this release retains the same graphical charm, while augmenting its predecessors’ fisticuffs with a procession of fetch quests.

Players start their journey in the game’s character creation component, crafting an Animal Crossing-esque avatar from a variety of hairstyle, eye, and mouth templates. Following several text boxes which offer only the slightest narrative impetus, the protagonist is sent scurrying around the title’s inaugural planet, ready to accept a mission offered by one of the celestial body’s citizens or from a quest board. Succeeding the acceptance of a quest- which offer a limited span of retrieval assignments and delivery errands, players are send into one of the planet’s dungeons. There, the occasional foe comes between galactic hero and goal, offering a bit of turn-based pugnaciousness for variety. 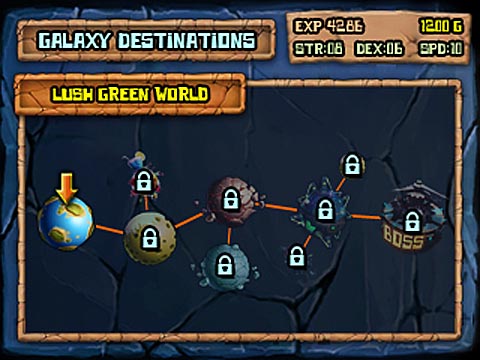 What are the game’s strengths? Graphically, Planet Crashers is a proficient title, parading polygonal characters and locales which nearly rival the richness of a cartridge-based release. Moving across each of the game’s nine settings exhibits a pleasing visual effect, where the player saunters across a diminutive globe, recalling Super Mario Galaxy’s cosmic strolls. Motifs vary from planet to planet, and while most are generic- exhibiting stone caverns with radiant crystals or ice caves entrenched with snow, clever milieus like a Halloween-themed backdrop feel distinctive.

Certainly, the game’s battles have their strengths, allowing players to pick from a quartet of unlockable attacks as well as the obligatory HP replenishing potion. While on offense, well-timed button taps elevate the amount of damage ripped from enemy hides, recalling mechanics from the Paper Mario series. Inexplicably, defense doesn’t offer the same type of engagement, forcing players to stand by as foes retaliate. Of course, various provisions and protective items offer a temporary stats increase to both increase the ferocity of assaults and offer a bit of shielding from enemy strike, but this bonus is frustratingly short-lived. Still, combat offers a viable alternative to the game’s other experience gaining method- making a beeline for quest items and evading wandering adversaries. 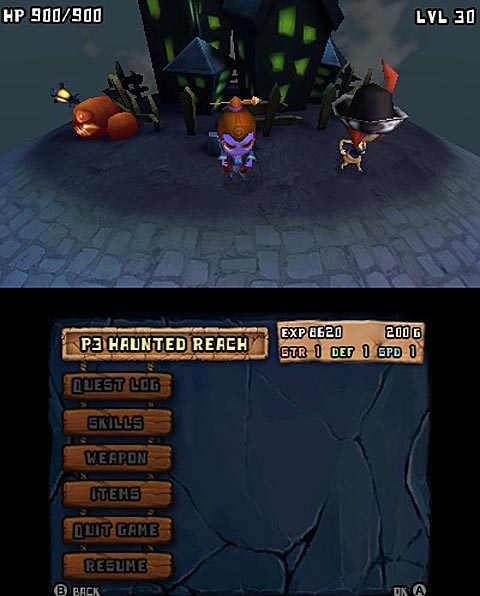 What are the game’s weaknesses? Collectively, Planet Crasher’s assortment of components runs a broad and muddled gamut. At times, the game’s whimsical chibi-style characters and irregular weapons seem to be paying homage to classic Japanese role-playing titles. Yet, the title’s exceedingly sparse writing can’t hope to match this tone. Too often there’s too little text to establish any type of atmosphere, and what is in the title wavers from earnestness to ham-fisted faux-Engrish. If the developers at Renegade Kid were fearful that gamers might lose interest in taking the time to read a few screens of text, then they should have made the protagonist a bit more fleet-footed. Woefully, our hero moves without a sense of urgency, despite the imminent peril of a universe.

While grinding is customary in the role-playing genre, the homogeneity of quests and combat in Planet Crashers can make the game’s journey feel more repetitive than rewarding. From the lack of strategizing while choosing attacks to the redundancy of retrieval errands where subsequent missions send players to the same room the title’s pursuits offer little variation across the game’s fifteen hour span. Even for resolute RPG fans, there simple are enough incentives doles out during Crashers journey. Mechanically, limiting players to one active mission at a time seems like a way of padding the title’s playtime. 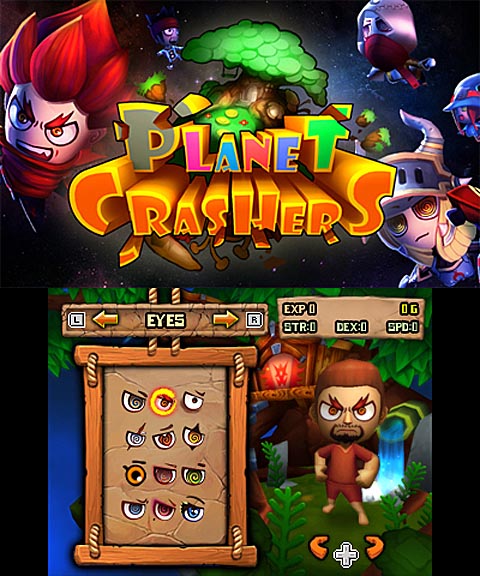 Is it worth the money? Although Planet Crashers does offer rather a lengthy adventure for its $9.99 purchase price, a majority of that time is spent performing repetitive tasks. While players may be lured by the game’s graphical competence and a lack of genre entries, they want to pass on this expedition. With standout titles such as Mutant Mudds, Moon and the Dementium series under their belt, Renegade Kid has demonstrated they can offer compelling portable titles across a variety of genres. If they revisit role-playing, let’s hope they deliver their usual verve.