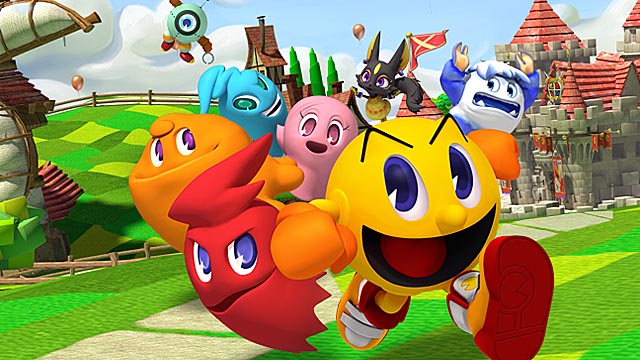 Much like the Kardashians, Pac-Man seems to have developed an insatiable lust for social celebration. After abandoning the squalid hallways which catapulted the pullet-muncher to fame, Pac has enjoyed everything from kart racing with his former foes (2006’s Pac-Man Rally) to the occasional game of pinball (2005’s Pac-Man Pinball Advance). Even when Old Yellow is coaxed back into his renowned mazes, he’s now accompanied by Championship Edition’s throbbing electro soundtrack.

Yet, the most incriminating evidence for Pac’s festivity-filled behaviors might be found in his forays inspired by the Mario Party series. From Pac-Man Fever to Pac-Man Party, the canary-colored protagonist reveals his passion for mini-games and friendly rivalries set against along festive board game boulevards. With a bit of handful of tweaks to the traditional tabletop-inspired tropes, recent 3DS release Pac-Man Party 3DS is certainly a serviceable title. With a quick play pace and sporadic action bits, the title is superior to Hasbro’s licensed, albeit austere line of recreations. 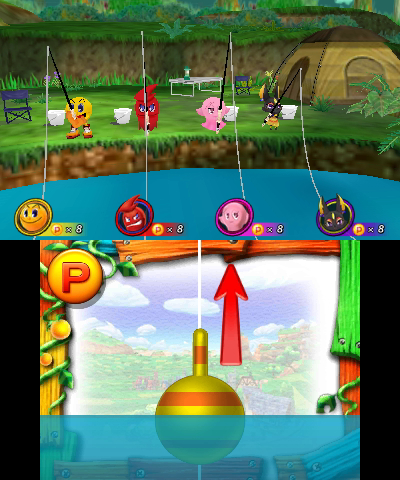 Prudently eliminating the need for an isolated tutorial, Pac-Man Party’s story mode drops a solitary player into a match with a single AI-controlled opponent, allowing for an effortless absorption of the game rules. Much like Monopoly, participants take turns moving around a square playfield, automatically receiving castles when landing upon property squares. Much like the prominent board-game, maintaining ownership of consecutive structures is advantageous- giving participants a payout based on the size of their empire. Party’s mini-games come to the forefront once players land on a stronghold owned by another player. Here, rivals not only vie for control of the castle, but also a cache of cookies, which serve as Pac-Man’s currency.

Wisely, a few additions prohibit Pac-Man from becoming a plagiarist. Landing on a boss square tasks contestants with working cooperatively to defeat a large foe, while power cookies allow for a limited number of boosts during battle. Pac-Man Party also eliminates Mario Party’s many random events as well as the contentious bonus stars which artificially kept the proceedings competitive. With players moving across the board at the same time, the game’s pace is so sluggish. 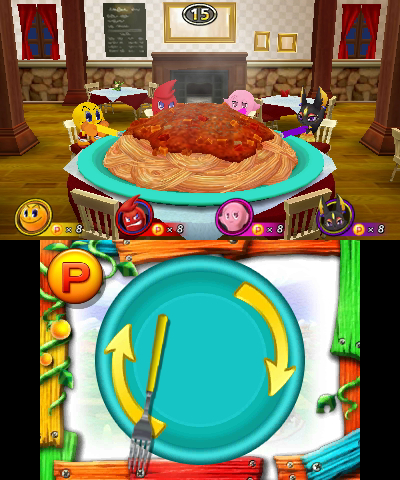 Pac-Man Party 3D falls flat in its selection of mini-games which often duplicate the diversions found in Nintendo’s series. There’s the pumping competition (this time with one of Dig Dug’s Pookas) where players take turns putting a bursts of air into an inflatable until it pops. Equally familiar is the selection of bumper car-like events where players try to knock adversaries off the playfield and WarioWare-like events where participants use the stylus to mimic movements. Fortunately, a few contests are enjoyable, such as the race across a pile of debris, where each player’s movements alter the stack of rubble in unpredictable ways.

While trying to earn more cookies than AI characters can be absorbing at times, Pac-Man Party 3D really comes alive with its multiplayer component. Offering the ability to play a local match with up to three other 3DS owners (with Download Play functionality, the other participants don’t need their own cartridge) is the catalyst for a rousing rivalry. Regretfully, the title doesn’t allow for any type of online play, which might have been rewarding- despite the prospect of rage-quitters. Graphically, Pac-Man Party can be a mixed bag with background visuals which range from functional to fun drenched. The load times of mini-games are a slight drawback, with a seven second pause before each bout. Complementing the single and multiplayer sessions are a mode which allow players to jump into any of the fifty mini-games as well as emulated versions of the Pac-Man, Dig Dug, and Galaxian coin-ops. 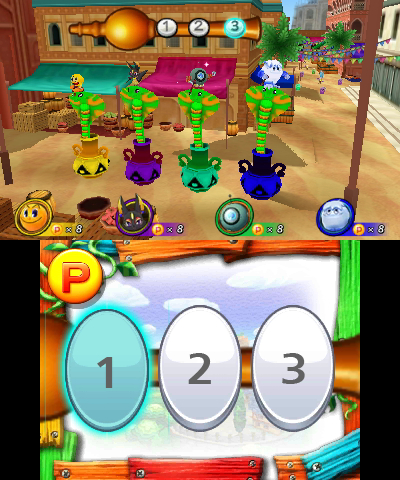 While Pac-Man Party 3D’s selection of mini-games aren’t consistently original or engaging, the title’s main board-game mechanic is enjoyable, especially with a group of fellow 3DS owners. Still, for gamers yearning for an afternoon of spirited competition, Pac knows how to throw a upright, if not exorbitant party.