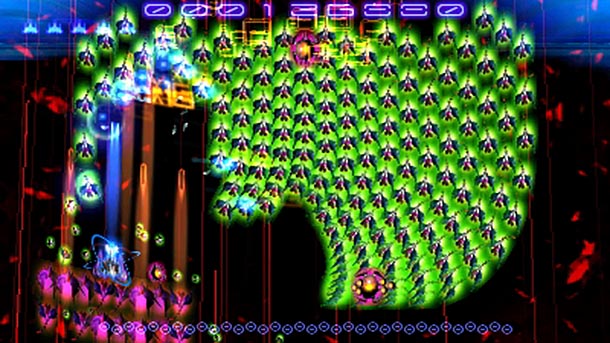 Remakes of coin-operated titles are an irrefutably tricky undertaking. While staying true to the conventions of the original games, a remake should also update both the mechanics and aesthetics of a game to contemporary standards. Two of the best exemplars of this approach are Namco’s Pac-Man Championship Edition and Galaga Legions; each is a remarkably proficient, high-definition, downloadable reinvigoration. Success was achieved by reconceptualizing each title as a taut score attack, all while rendering the games in stunning, retina-searing, swaths of neon.

Although recent release Pac-Man and Galaga Dimensions doesn’t deliver the latest, most immersive iterations of these two diversions (which added several tweaks as well as the DX designator to each title), the cartridge does offer their rousing predecessors. If there was any doubt in the 3DS’s ability to run a Xbox 360/PS3 caliber game, Dimensions‘ main attractions should eliminate  any skepticism. While scaled a bit to accommodate the resolution of Nintendo’s portable, both Pac-Man Championship Edition and Galaga Legions are masterful ports. Legions is especially impressive, with a solid framerate despite hundreds of on-screen foes. However, Pac is no slouch, providing spot-on control with the circle pad, allowing players to nimbly swallow up a string of dots while evading the familiar quartet of ghosts. 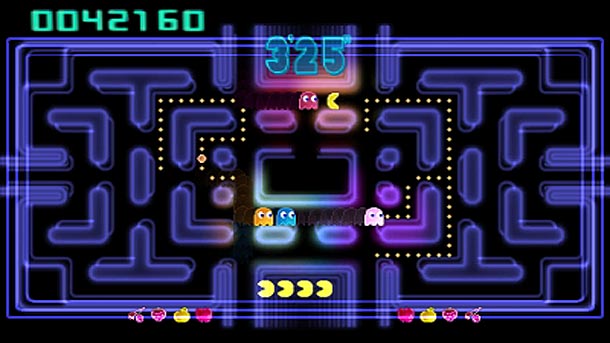 Beyond Pac-Man CE‘s foundational Ranked Mode, the game also provides a number of interesting variants. There’s a Heaven & Hell Challenge Mode which alternates between power-pellet populated hallways and ones without the supremacy-swaying  tablets. Darkness obscures the on-screen maze, save for the area immediately surrounding the intrepid yellow hero. Meanwhile, Legions provides a protracted Adventure Mode or the ability to jump into any of the five stages via a Challenge Mode. Both games utilize the 3DS’s bottom screen to display any earned medals, which function as in-game achievements. While both games present a pleasing three dimensional  effect, I found myself turning the depth slider down to concentrate on the oft-intense  action.

Both Pac-Man Tilt and Galaga 3D Impact are built around the 3DS’s gyroscopic functionality. The former places Pac is a Sonic-like platformer, each of the game’s thirty levels filled with warp pipes, pinball-like flippers and plungers, and well as a multitude of dots to gather. By tilting the portable left or right, the game’s gravity is affected, shifting platforms along or directing projectiles into ditches. Even with the world angled to its limits, Pac-Man Tilt rarely demonstrates the athleticism shown my most hop-and-bop heroes, diminishing the game’s enjoyment. Galaga 3D Impact invites players to rotate the 3DS to move an on-screen cursor during its on-rails shooting. While the game offers some gratifying gunning, with different weapons mapped to each face button (as well as an enjoyable cool-down mechanic for each armament ) a few troubles exist. With a scant five levels, Impact forces players to start from the beginning for each playthrough, thrusting the game toward tedium. Additionally, the game’s framerate falters when 3D is engaged, turning what could have been the cartridge’s showcase amusement  into a second-class supplement. I found Impactperformed best without any gimmickry;  playing in 2D with the circle pad proved the best method to subdue the final boss. 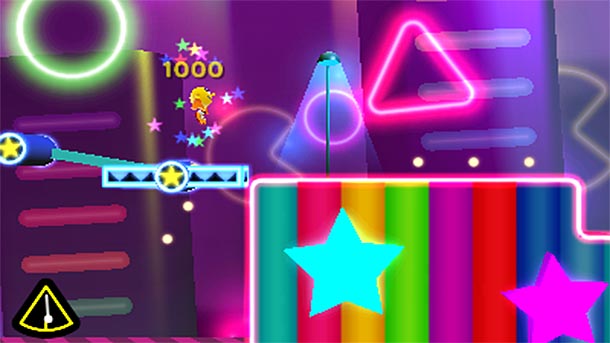 Rounding out the cartridge are emulated version of the original Pac-Man and Galaga. Expectedly, they run flawlessly on the 3DS, although the vertical orientation of the original game means they run in a diminutive window on the top screen. However, a few perks elevate these titles presentation, ranging  from the replication of monitor curve to the integration of sixteen achievements for each game.

Ultimately, the decision to purchase Dimensions hinges on a single question: how eager are you to play Pac-Man Championship Edition and Galaga Legions on the go? For players seeking portable adaptations of these two titles, the cartridge likely justifies its current price. Gamers hoping for an ample anthology based around these two coin-op classics, may want to wait for a sale before dropping a few rolls of quarters on Dimensions. 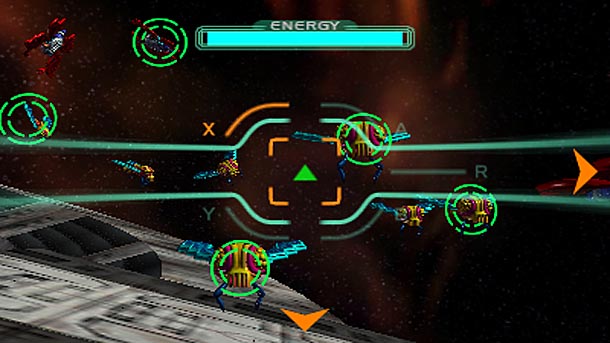