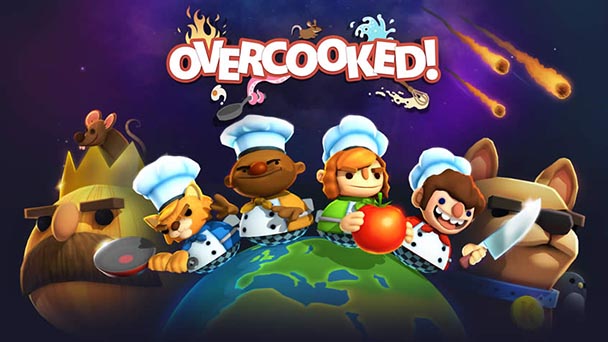 Given the oft-inflexible grasp of copyrights of trademarks, spiritual sequels are exceedingly common in the game industry. Often born from a developer’s appreciation of a dormant property, these works borrow the basic blueprint of a game- evolving mechanics enough to keep attorneys and audiences content. With the release of Overcooked! for the PC, PlayStation 4, and Xbox One, there’s a convincing argument that someone from the Ghost Town Games team was a fan of Garry Kitchen’s Pressure Cooker. Both games task players with controlling a stout chef, who must manually assemble meals in an increasingly chaotic environment.

But the two games are also separated by over thirty years of progress across the medium. Where Pressure Cooker used simple spite-based graphics to convey the process of making hamburgers, Overcooked! presents players with a full menu of culinary creations- all rendered in high definition, polygonal charm. The 2600’s limitations also meant that only one chef could commander the kitchen at a time. Now, up to a quartet of cooks can work cooperatively or in teams, providing proof to that old age about too many chefs and spoiled broth. 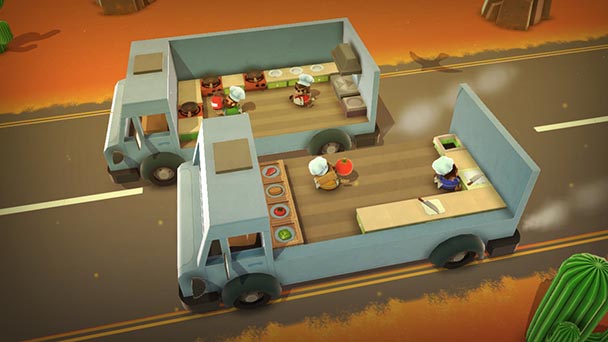 Regardless of staff size, Overcooked! rudiments remain unchanged. Like the myriad of time-management restaurant sims, the game breaks cookery down into easily accomplished micro-tasks. Essentially, a variety of orders some in, each requiring the preparation and combination of ingredients, before each diner can be served. Naturally, there’s a heap of other hassles to confront. Some are straightforward, like the recycling of dirty dishes by taking them to a sink and scrubbing them down. Others incidents are more exhaustive, like the smoldering ingredient which starts a fire engulfs your entire kitchen.

At all times, there are at least two chefs on-screen. Solitary players can switch between the duo with a button press, moving one cook around, while the other slices food or washes plates. Alternatively, single players can try to control both chefs simultaneously, but if you’re ever played The Adventures of Cookie & Cream (Kuri Kuri Mix) for the PS2, then you’ll know being able to effectively direct two characters is an exceedingly rare genetic abnormality. 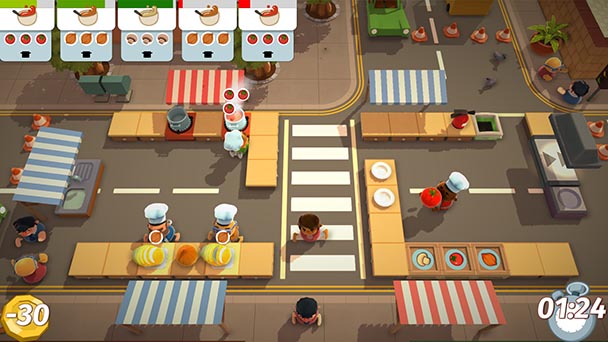 When several local players converge, Overcooked! reaches a rolling boil. Requiring constant communication and sharp coordination, it’s slightly disappointing but not surprisingly to find the absence of online play. But grab three or four participants and the game converges on the sublime, as a team of personal attempts to work in perfect harmony. And when everyone is working together, churning out gastronomic wonders with the precision of an automated assembly line, Overcooked! feels transcendent.

Just don’t expect the jubilation to last too long. Ghost Town Games knows that the communal satisfaction is found after the team successful confronts difficulties. And the game is not afraid to throw a procession of problems at players during each four-minute round. While many stem from the logistics of feeding a mounting, ever-impatient swath of diners, the most hectic harms come from the environments. From slippery tundra with a moving ice flow, a swaying ship where stations are constantly shifting, to a pair of food trucks racing side by side, kitchen contexts grow increasingly frantic. Couple this with the temptation of a spring button that can jostle other players and Overcooked! becomes an interactive test of group tolerance. Few games are able to subtlety stymie cooperative elements as well, making multiplayer sessions a consistently riotous experience. 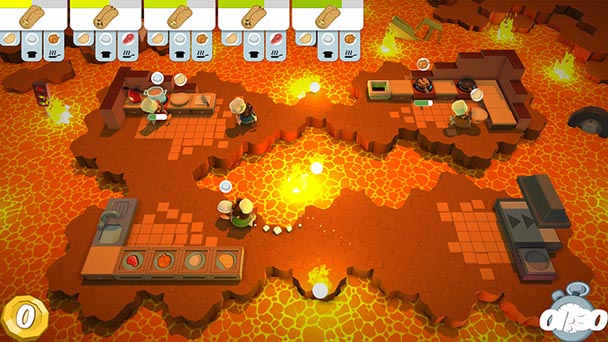 Despite balancing that lessens the requirements for individuals to earn a coveted three-star rating on a level, solo play just isn’t as fun. Without humans that error, react, and recover, the game feels rather routine and probably won’t hold attentions for long. Without spoiling things, some of the game’s humor comes from lapses in culinary hygiene, which become are especially amusing around neat-freaks whose role-play closely mirrors their own habits.

Visually, Overcooked! demonstrates the ability of the Unity engine, rendering its chefs, kitchens, and ingredients in delighting detail. To reduce the level of visual confusion, players are able to select their own avatars, and pleasingly there’s a few interesting non-humanoids that can enter the galley. Thankfully, the game’s framerate remains fluid, even when there’s a whirlwind of activity and catastrophe is imminent. And when disaster does erupt, it’s merciful that Overcooked! doesn’t immediately bring things to an end, only reprimanding players with a diminished gold star count for each stage. Sonically, the game’s is competent, beyond an incongruously tranquil opening song, the game’s vivacious soundtrack echoes the speeding excitement of each round. 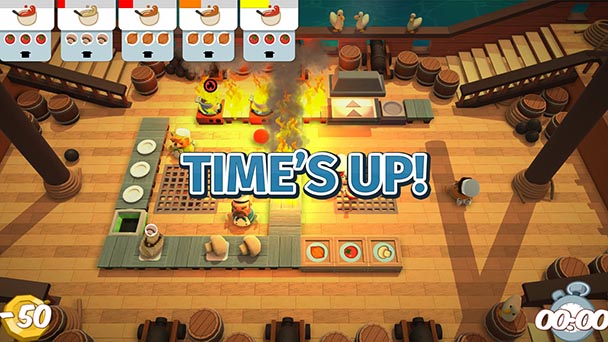 For many, Overcooked! will be paradoxical. It’s a stressful, intense experience that offers a reprieve from our own real-world tensions. But when the mistake happens here, no lives are lost- not even a morsel of food is wasted. Instead, the game blossoms from each blunder, testing the cohesion of teams in an entirely entertaining manner. The one caveat is for solitary chefs who find having to juggle two characters to be an experience that’s well, undercooked.

Overcooked! was played on PC with review code provided by the publisher

Overcooked!
Platform: PC (reviewed), PS4, Xbox One
Developer: Ghost Town Games
Publisher: Team 17 Digital
Release date: August 3rd, 2016
Price: $16.99 via Steam, PSN, or XGS
Overcooked! Review
Given the oft-inflexible grasp of copyrights of trademarks, spiritual sequels are exceedingly common in the game industry. Often born from a developer&rsquo;s appreciation of a dormant property, these works borrow the basic blueprint of a game- evolving mechanics enough to keep attorneys and audiences content. With the release of Overcooked! for the PC, PlayStation 4, and Xbox One, there&rsquo;s a convincing argument that someone from the Ghost Town Games team was a fan of Garry Kitchen&rsquo;s Pressure Cooker. Both games task players with controlling a stout chef, who must manually assemble meals in an increasingly chaotic environment. But the two&hellip;

Summary : Move over Peter Pepper, Overcooked!’s chefs have more to worry about that a six-foot tall shambling hot dog. Assembling food with cooperative partners here is surprising ‘well-done’, with enough intricacies to test the very best of friendships.