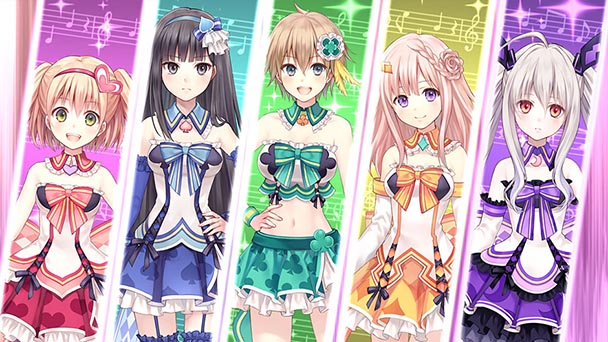 Typically, Armageddon is handled by muscular soldiers packing obscene amounts of firepower. But when developer Compile Heart envisions doomsday, it’s energetic J-pop idols who are responsible for saving our hides. Previously, the Shibuya-based studio crafted anthropomorphized consoles to offer a fanciful allegory of the home console wars across the Hyperdimension Neptunia franchise. For the release of Omega Quintet for the PlayStation 4, the developers employ a handful of starlets in order to offer a stimulating examination of the Japanese pop music industry.

But before players are able to appreciate the plotline, two warnings must be discussed. First, Omega Quintet fails to make a friendly first-impression. The first two hours of the game are jammed with daft conversations which are about as interesting as eavesdropping on a cluster of middle-school students. When you’re not listening to the ditzy dialog of Otoha, a young girl who is indolently accepts her civilization-saving potential, Omega Quintet front loads a procession of tutorial screens which explain every nuance of combat, skill upgrades, crafting, and mission structure. Between these two approaches, in even the most tolerant otaku is likely to wane. 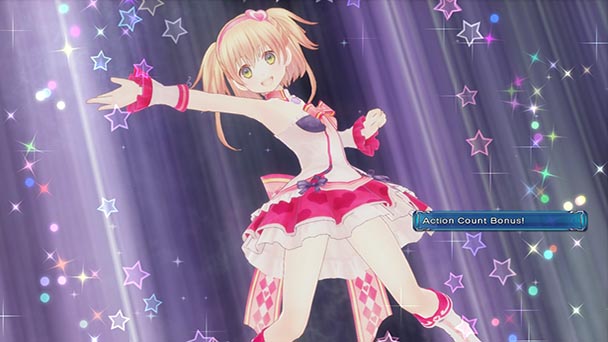 The other caveat is that the title requires a familiarity with pop idol culture. The game’s prologue introduces us to Momoka, who as one of the game’s Verse Maidens, uses her singing ability to quell an encroaching evil presence known as the Blare. While she’s able to defeat the threat, her exhaustion from the encounter signals that she’s getting too old to remain a Maiden for much longer. Although conversations plumb this premise for amusement, Compile Heart uses the opportunity to scrutinize the pop idol craze. Momoka’s imminent retirement represents the fate of actual girls who are recruited into the music business and subsequently cast out before hitting their thirties. Wisely, that’s not the only element that’s explored, with Quintet delving into fan obsession and the consumption of related commodities. That said, Compile Heart never gets too critical, using a nonessential character to carefully balance skepticism with compulsive spectacle. After all, this is a game which permits players to choose their character’s wardrobe and even design music videos using an editing module similar to the component found in Hatsune Miku: Project DIVA F 2nd.

But if players can meet these two prerequisites, there’s plenty of enjoyment to be found. Like the Neptunia titles, play is split into two basic elements. Visual novel-esque sequences exhibit two-dimension character portraits that emote and even breathe in intricate detail, with chests heaving in eerily lifelike fashion. While dialog-driven scenes doesn’t always deliver a payoff, they look absolutely opulent on the PlayStation 4. The title’s three-dimensional exploration sequences aren’t quite as stunning, revealing the occasional instance of austere texturing. But they are engaging, sending players exploring locales filled with forks, with quite a few branches locked until protagonists complete a specific task. 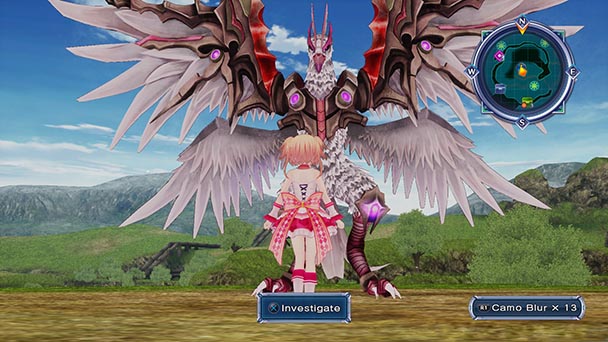 While these outings are pleasing, players are bound to have a few quibbles. Side missions are fairly lackluster, tasking gamers with the type of workmanlike collection and extermination duties that are common to MMOs. The other issue is that it’s difficult to calculate how certain side-quests can be opened. Since the game’s true (and significantly more gratifying) ending is dependent on the completion of certain missions, this might oblige players to follow FAQs, instead of enjoying the game organically. Occasionally, the game’s doesn’t signpost what players should do next, which is likely to cause confusions once all of the game’s quests are finalized.

Undoubtedly, battles are Omega Quintet’s highpoint, with the game extending engaging, quick, and sufficiently complex combat. Turn-based, the game uses the metaphor of singing and dancing as your roster of Maidens deliver the hurt to a well-built bestiary of Blare. Early on, players will discover a number of approaches to success. Weapon type not only determines an ideal attack range but a character’s weapon proficiency can increase the number of actions a member can take each turn. Beyond the armament-based skill set, party members also can utilize elemental-based magic, as well as a special that can be unleashed once a Voltage Gauge is filled to capacity. There’s even the ability to pummel thrashed opponents, and if you can issue an additional health bar of damage, you’ll earn an overkill bonus. In general, the only issue with combat is that the exchange of blows feels like a conventional role-playing game, complete with pleasingly rendered animations. Considering that the Maidens are using music to battle opponents, it would have more appropriate to hear auditory assaults, with the girls issuing vocaloid-based melodies or hare hare yukai showstoppers to beat down the Blare. 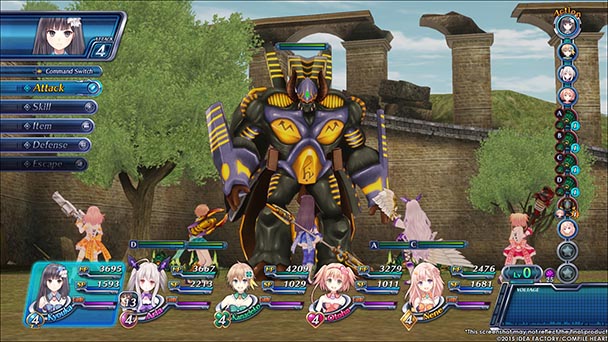 Back at your home base, numerous activities will vie for your attention. New equipment, costumes, and items can be constructed by dismantling found goods, providing an appealing way to upgrade your gear and keep your party adventure-ready. Characters also have robust skill trees that can be cultivated to nurture each girl to take a specific role in combat. Later, Live Concert and Harmonics mode enrich battles with more formidable attacks which are ideal for besting Blare bosses.

Although a trip to the menu screen allows players to switch between Japanese and English voices, the game’s missing a bit of localization. When wandering around each area or in battle girls will issue short quips, which weren’t given a translation. Meanwhile the game’s non-voiced scenes seem to have been handled by a different team, divulging grammatical and character spacing errors that aren’t in the vocalized scenes. Those who do understand a bit of Japanese might be thrown off by the differences between spoken word and text. From “Beep” changed to “Blare” and characters like Takuto becoming Takt, a bit of dissonance might emerge. Undoubtedly, the game’s biggest blunder might be the inability to change difficulty levels once the campaign has started. As such, only newcomers will want to start Omega on the ‘normal’ setting. 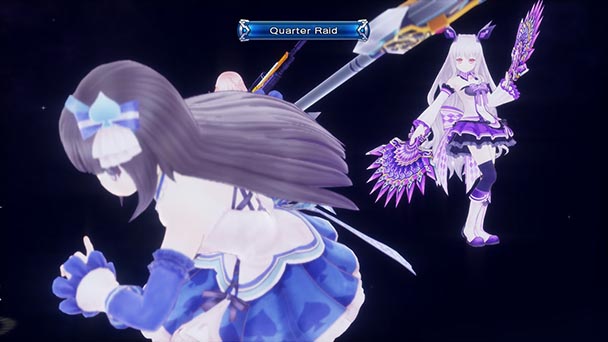 It’s clear that Compile Heart knows their audience. Try to adjust the camera to sneak a panty-peek at one of the protagonists, and she’ll cover up demurely, admonishing the player for their pervy intentions. Yet, at the same time, fan service abounds, from the decision to have the Maidens’ attire rip ala Senran Kagura to cutscenes that catapult Omega Quintet into M-rated territory. It’s only slightly disheartening that this same familiarity could have been applied to some of the game’s core mechanics. A restructured prologue and less confusing side quest system would have allowed Quintet to reach its melodious, moe-filled potential.

Omega Quintet was played on the PlayStation 4 with review code provided by the publisher.

Omega Quintet
Platform: PlayStation 4
Developer: Compile Heart/Galapagos RPG
Publisher: Idea Factory
Release date: April 28th, 2015
Price: $59.99 via retail or PlayStation Store
Omega Quintet review
Typically, Armageddon is handled by muscular soldiers packing obscene amounts of firepower. But when developer Compile Heart envisions doomsday, it&rsquo;s energetic J-pop idols who are responsible for saving our hides. Previously, the Shibuya-based studio crafted anthropomorphized consoles to offer a fanciful allegory of the home console wars across the Hyperdimension Neptunia franchise. For the release of Omega Quintet for the PlayStation 4, the developers employ a handful of starlets in order to offer a stimulating examination of the Japanese pop music industry. But before players are able to appreciate the plotline, two warnings must be discussed. First, Omega Quintet fails&hellip;

Summary : Although Omega Quintet doesn’t make a completely harmonious debut, the game’s combat, and exploratory elements prove to be compelling while the game’s scrutiny of pop idol industry is destined to delight otaku.