Nights of Azure 2: Bride of the New Moon review 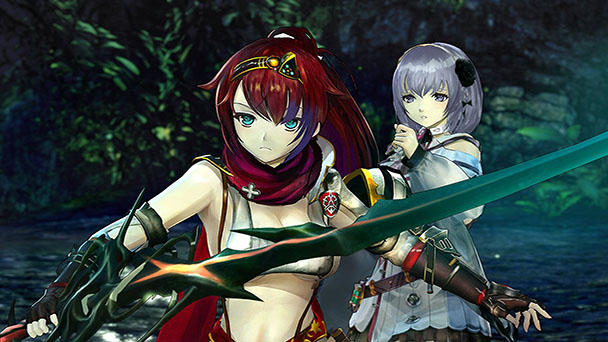 Having developed the acclaimed Atelier, Ar Tonelico, and Ciel Nosurge series, Nagano-based Gust seemed to find contentment in the creation of turn-based role-playing games. As such, the release of Nights of Azure (Yoru no Nai Kuni, literally meaning “A Land Without Light”) was a mild surprise. Here, combat played out in real-time, as players did their best to hack away at foes, summoning a posse of assistants for much-needed support. As the fledging entry in a prospective franchise, Azure demonstrated a healthy amount of ambition, but more importantly, felt distinctive with its reliance on CPU-controlled characters.

With the release of sequel Nights of Azure 2: Bride of the New Moon onto the PlayStation 4 and PC, Gust surprises once again. Most might expect the developer to double down on the approach, creating a follow-up that intensifies the importance of AI-controlled subordinates. But, the studio subtlety retreats, upping the involvement of the protagonist. While a seemingly minor change, it’s one of the alterations that might alienate fans of the first game. 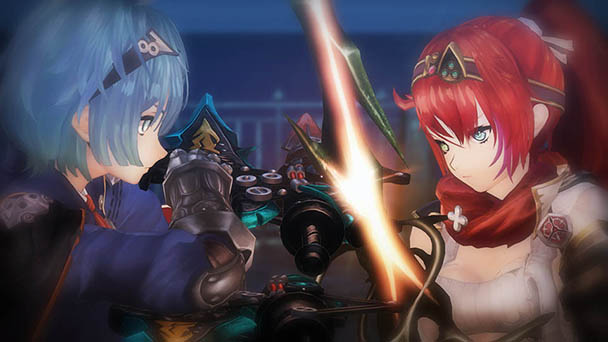 What’s not to say there’s little similarly across Bride of the New Moon. Thematically, the game explores some of the same concepts, with the sacrifice of an old friend serving as the central impetus. This time out, Moon opens hundreds of years after the inaugural title, with the threat of Blue Blood still endangering the world. We first meet apprentice knight Aluche on a mission to escort her childhood acquaintance, the priestess Liliana back to the Curia’s base. Upon arrival, Aluche is promoted and informed that the sacrifice of Liliana is the only way to stop the nefarious Moon Queen. But, when chaperoning Liliana to her imminent death, Aluche encounters another friend from her juvenile years. Ruenheid, a Holy Knight of the Lourdes Order is opposed to the Curia’s position, believing that a sacrifice will inadvertently strengthen the Moon Queen.

Undoubtedly, the Queen is already rather formidable. When a fight breaks out with the trio, she nonchalantly impales the young maiden. Subsequently, Aluche finds herself resurrected as a half-demon, resulting in an existence filled with scorn for the once honorable knight. What follows is some interesting and occasionally awkwardly romantic banter between Aluche, and an ever-expanding group of young women wittily referred to as “lilies”. While the plot is far more yuri-ogling fan-service than female/lesbian empowerment, it’s remarkably compelling and well-told, making it hard not to care for the game’s leads. 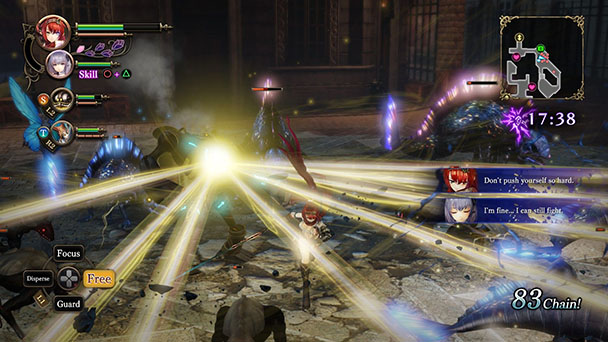 Like the first Azure, there’s a base of operations to advance oppositional forces. This time out, the headquarters is the Hotel Eterna. While this hub permits Aluche to converse with Liliana, Ruenheid, and a quintet of other Lillies, it’s also the place where the protagonist can utilize the Blue Blood she’s gathers from fallen foes. Here, Bride of the New Moon bestows a bit of customization, with players able to extend their health bar or prolong the amount of time she is allotted for missions.

Yes, that means that the title has a two-pronged time component which functions like the calendar of the Atelier and Persona series. Every time the lead accepts assignments, she’ll have to complete her mission objectives or risk being sent back to the hotel for rest. On a larger scale, players also have to worry about an advancing lunar cycle, with Nights of Azure 2 progressing after a preset number of evenings. Ultimately, if a new moon appears, the queen prevails, leading to a game-ending condition.  Largely, the time constraint doesn’t feel overly stressful, especially since battling a boss reverses a moon phase. Effectively, the inclusion of these limitations prohibits players from excessive grinding, ensuring challenge, at least on the game’s higher difficult setting. 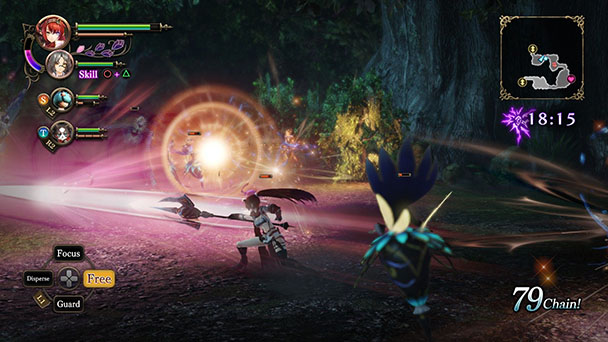 Whereas a quartet of Servans could unite with you in battle in the original Azure, the sequel changes up the composition of your squad. Now Aluche can select one of her lilies, each with a specific capability, with Ruenheid wielding the mighty Spirit Blade Odr, while detached doctor Camilla prefers using pistols to inflict harm. Additionally, players can be accompanied by two Servans, with some exhibiting new functionality. While some work offensively, doing things like launching projectiles at enemies, others reveal the ability to open new pathways, while some can transform into a weapon that Aluche can use. But even with the assistance, players will be inflicting the majority of damage, with subordinates taking more of a passive role this time out.

That said, there’s are incentives to coordinate with your CPU-powered allies. Revenge Attacks increase damage when Aluche lashes out again a recently ambushed Lily, while Double Attacks reward players who synchronize their assaults with an ally. And while Bride of the New Moon uses the same control system as its predecessor, with two different types of strikes, the ability to guard and dodge, there’s an increased amount of fluidity in Aluche’s animation routines. 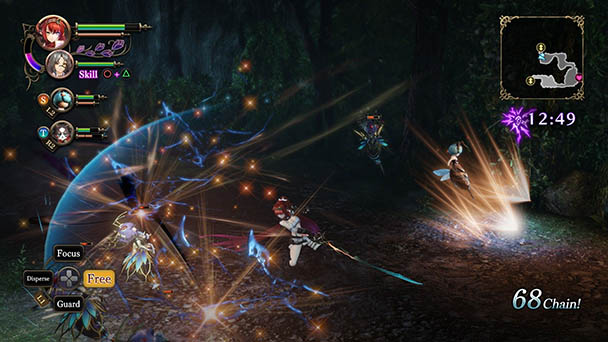 But the visual enhancement is undermined by a framerate that’s sporadically less than ideal. When combat becomes heated the game plunges south of the thirty-frame per second threshold on an original PlayStation 4. Coupled with foes who tend to encroach players, this can make skirmishes a bit messy. And while the game’s character models are adept and poised to delight players with the occasional indulgence of mild fan-service, animation routines during the game’s cinematics can be a mixed bag. An early scene of two Lilis clinging together while zip-lining across a chasm should feel stirring, but instead looks comical. But that said, some of the animations that play out during battle are rousing, with embraces and spirited touches destined to delight when players trigger massive, musou-like onslaughts.

Platform comparison
At first, the PC port of Nights of Azure 2 doesn’t instill confidence. The game’s launcher offers only a modicum of visual option from a limited number of sub-1080p resolutions, while cinematics are pre-rendered and reveal artifacting. Worse, the game seems to have trouble with using the discrete GPU in Nvidia powered laptops. But if players force the title to take advantage of their hardware (accomplished by heading into the Nvidia control panel), and make a few tweaks, Azure on PC can easily outshine console.

With few adjustments, we had Bride of the New Moon outputting at 1080p/60 FPS on a mobile 1050ti. The uptick in responsiveness was noticeable, with Aluche lithely cleaving foes with a newfound litheness that improved our effectiveness during encounters. While the game’s camera can still become obscured during battle, the boosted refresh rate made it slightly easier to distinguish when foes were about to attack.

Have a PlayStation 4 and PC but don’t know which version you should purchase? If you have anything less than a GTX 1050/RX 470, you’re probably better off with the console version, where you can enjoy the smoothness of in-game cinematics. Anyone with a more robust card is recommended to go with the Steam version, which offers resolutions and framerates that Sony’s dedicated hardware can’t touch.

Traditionally, game sequels refine problematic parts of their predecessor, while maintaining the elements that produced enjoyment. Surprisingly, Nights of Azure 2: Bride of the New Moon shirks that trend, fundamentally redesigning a variety of core elements. Fortunately, the result remains enjoyable, and as long as you’re not expecting an experience that builds on the original game, New Moon largely shines. 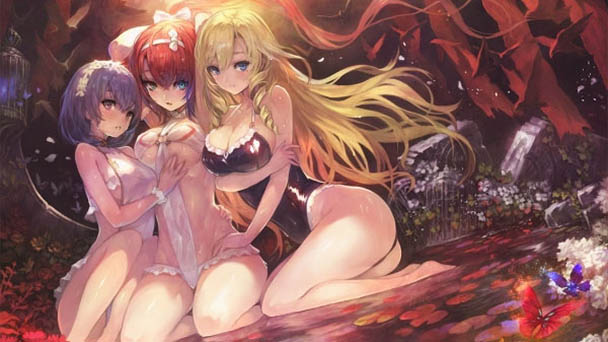 Nights of Azure 2: Bride of the New Moon was played on the
PlayStation 4 with review code provided by the publisher.

Nights of Azure 2: Bride of the New Moon
Platform:
PlayStation 4, PC, Nintendo Switch
Developer: GUST
Publisher: Koei-Tecmo America
Release date: October 24th, 2017
Price: $59.99 via retail or digital download
Difficulty: Easy to Moderate
Nights of Azure 2: Bride of the New Moon review
Having developed the acclaimed Atelier, Ar Tonelico, and Ciel Nosurge series, Nagano-based Gust seemed to find contentment in the creation of turn-based role-playing games. As such, the release of Nights of Azure (Yoru no Nai Kuni, literally meaning &ldquo;A Land Without Light&rdquo;) was a mild surprise. Here, combat played out in real-time, as players did their best to hack away at foes, summoning a posse of assistants for much-needed support. As the fledging entry in a prospective franchise, Azure demonstrated a healthy amount of ambition, but more importantly, felt distinctive with its reliance on CPU-controlled characters. With the release of&hellip;

Summary : Nights of Azure 2: Bride of the New Moon reduces its real-time strategy influences, doubling down on the hack-and-slash action. While that might dishearten a few fans of the original game, the fundamentals are undeniably entertaining.