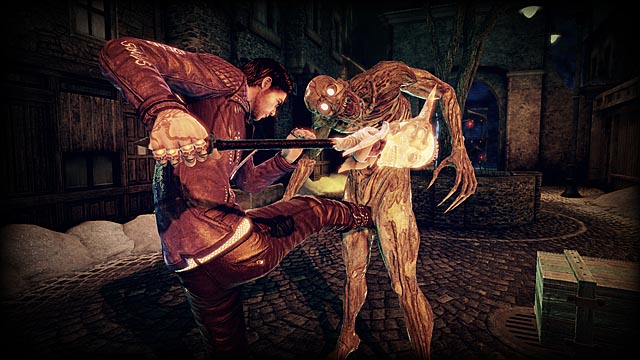 This week’s full list of new releases offers plenty of reasons to be scared. Beyond John Carpenter (Halloween) and Steve Niles (the 30 Days of Night comic mini-series) involvement in F.E.A.R. 3, Suda51 (killer7) and Shinja Mikami (the Resident Evil series) colloboration for Shadows of the Damned,  there’s also the threat of world domination by Lightning McQueen. If the thought of store aisles crammed with the image of a happy, anthropomorphic car isn’t frightening for you, perhaps the mention of comedic/horror actor Bruce Campell lending his voice to Cars 2 might just induce shivers.

DesertEagle’s Pick: If you’re looking for a insanely detailed military sim and your PC is up to the task, Arma 2: Reinfocements is an intriguing standalone/addition which adds Her Majesty’s Armed Forces as well as private military contractors. For console gamers eager to shoot something, F.E.A.R. 3 might be the way to go. The series has almost had some of the most adaptive AI in the business.

SeanNOLA’s Pick: Okay, I’ll admit it: I’ve never actually played through Ocarina of Time. I know, it’s a sin, but the N64 is the one game system that came out during my lifetime that I have never owned. I’m intrigued by the remake, but my current lack of a 3DS keeps me from picking it up, and the title isn’t intriguing enough on its own to compel me to drop $250 on a new console. I am at a stalemate.

Samurage’s Pick: I’m can’t wait for F.E.A.R. 3;  The second one scared the crap out of me, especially the school area. I especially enjoyed seeing how the character development arc played out.  If F.E.A.R. 3 ends up being anything like the second one, I will be totally happy with this purchase.  Hell to the yeah!