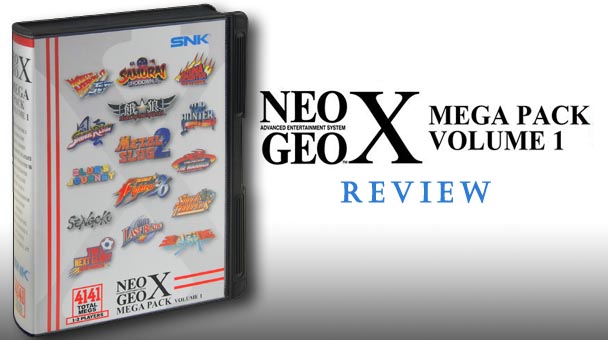 Emulation is almost always a difficult task. When programmers attempt to deliver replications of cherished arcade games, expectations of pixel-perfect performance can add to the complication. Such was the case with the Neo Geo X. Although the standalone system was able to run its anthology of twenty titles at a respectable speed, issues such as screen tearing, graphical shimmering, sound reproduction, and overscan tuning sullied the overall experience. Since the SNK library is revered by many gamers, this made the $200 console difficult to recommend.

Fortunately- the system’s manufacturer, Tommo, recently issued a firmware update which remedies many of these afflictions. The downside is that since the Neo Geo X forgoes any online connectivity and relies on proprietary SD cards for patches and additional games, the revision comes at a cost. Currently, the most inexpensive method obtain the revision is by purchasing an entry in the Neo Geo Classic series. Each volume in the five-part compilation holds three new games, as well as the update. Alternatively, passionate players might invest in the Neo Geo X Mega Pack Volume 1, which contains all fifteen of the games on a single SD card as well as the new firmware data. 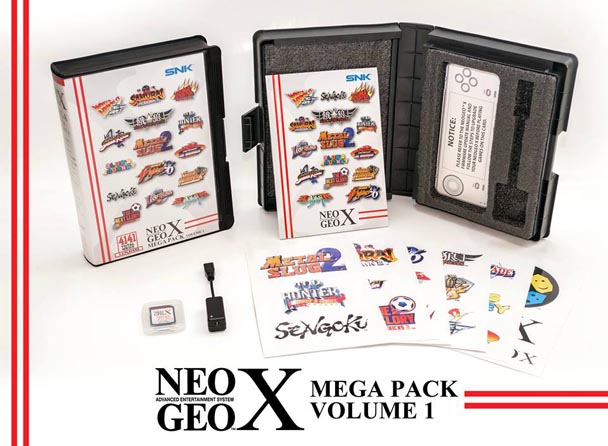 To enable the update, each collection of games ships with a small Rocket Cable. After inserting the SD card into the Neo Geo X, players simply plug the console’s power supply into one side of this device. Then, while holding the start button down, they insert the other end of the Rocket Cable into the USB slot of the portable. Flashing lights on the linking device indicate the connection status while an on-screen meter shows the progress of the system upgrade. In execution, the ‘Version 500’ update is completed in about ten minutes, including the brief time it takes for the system to automatically reboot.

Once the system update installed, the Neo Geo X’s emulation receives a remarkable boost in quality. One of the most noticeable improvements is the quality of the television signal. When using the analog composite cables, output still suffers from a bit of oversaturation and slight contrast issues. But other than those small details, picture sharpness has been radically improved. When using HDMI, the console also demonstrates a significant increase in quality. When using these digital connectors, output now resembles the look of a classic AES system. 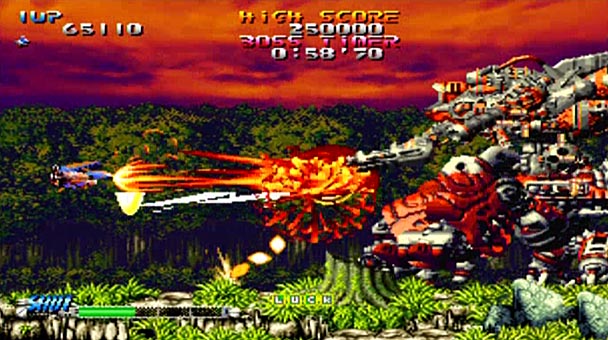 Whereas a small part of the pre-patch Neo Geo X’s screen was lost in the peripheries, now the console scales to the size of output device, adeptly accommodating overscan. For widescreen televisions, the Neo Geo X automatically converts the native 4:3 picture to a 16:9 display. Remarkably, the aspect ratio adaptation is handled proficiently, exhibiting neither a squatty image nor the shimmering effect which plagued the older emulation software. Unfortunately, screen tearing has only been diminished and hasn’t been completely excised from the console. While CRT play never produced any lag issues, a slightly delay between input and execution was noticeable on some HDTVs. With the update installed, play now feels particularly snappy, improving our performance across the Neo Geo X’s rich fighting game library. The ability to save progress is also a boon for players, since the portable still lacks the capacity for a sleep mode.

One the firmware update is installed, the menu system is revamped, improving both the aesthetic and functionality of the interface. For players who purchased Neo Geo X Mega Pack Volume 1, the pack’s selection of fifteen games are accessible through the center icon in the revolving menu. Although the $80 purchase costs five dollar more than buying the five card Neo Geo Classic collection, there are two advantages. Not only does Volume 1 arrive in a hardcase resembling the original AES packaging (and offering a secure place to transport the portable) but bundled collections frees players from having to continually swap SD cards. 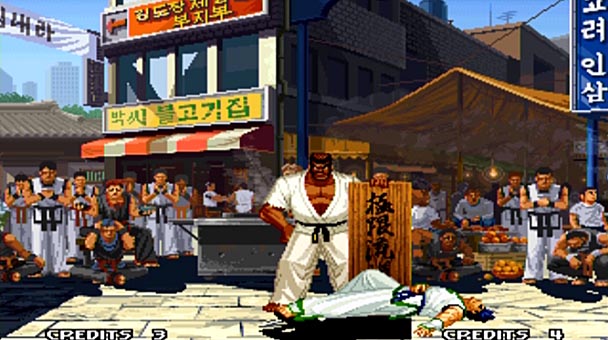 For fighting game aficionados, the Neo Geo X Mega Pack Volume 1 provides plenty of prospects for pugnaciousness. Beyond providing fast and responsive combat, Garou: Mark of the Wolves offers some of the best character animation seen on the system, while games such as Art of Fighting 3, King of Fighters ’96, Samurai Shodown III, and World Heroes 2 Jet improve on each franchise’s impassioned fisticuffs. Titles such as Savage Reign and Kizuna Encounter: Super Tag Battle might lack the name recognition of the previously mentioned games, but both are elevated by gallant variations- from the use of two-tiered arenas to hotly contested zones where players are allowed to swap characters.

Shmuppies will appreciate the inclusion of Blazing Star, a horizontally scrolling shooter which utilizes pre-rendered backgrounds. Meanwhile, Saurus’ Shock Troopers is a worthwhile eight-way blast-a-thon which recalls Ikari Warriors or Heavy Barrel. For those who prefer a bit of jumping mixed in with their lead-pumping, Metal Slug 2 is the Volume’s high point, with Blue’s Journey extending more of a straight-ahead action/platformer. The games on the Mega Pack which don’t stand the test of time are the card’s brawlers- Sengoku and Top Hunter: Roddy & Cathy, which seem a little too austere by today’s standards. That said, punching a screen-sized skull that’s puking malicious swordsmen still holds a bit of playful quirk. 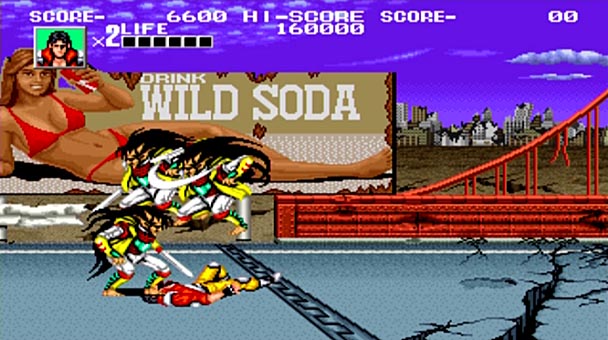 In the mid ‘90s, purchasing all the games on the Neo Geo X Mega Pack Volume 1 would have set you back at least two thousand dollars. Now, Neo Geo X players can own the fifteen-game collection for a little over five dollars a title. For anyone who ever yearned to own their own AES, the volume is a comparative bargain, and is much cheaper proposition than seeking out the original ROMs. Thanks to the firmware update on the card, playing the compilation offers an experience that’s closer to the authentic AES experience as well.

Neo Geo X Mega Pack Volume 1 Review
Emulation is almost always a difficult task. When programmers attempt to deliver replications of cherished arcade games, expectations of pixel-perfect performance can add to the complication. Such was the case with the Neo Geo X. Although the standalone system was able to run its anthology of twenty titles at a respectable speed, issues such as screen tearing, graphical shimmering, sound reproduction, and overscan tuning sullied the overall experience. Since the SNK library is revered by many gamers, this made the $200 console difficult to recommend. Fortunately- the system&rsquo;s manufacturer, Tommo, recently issued a firmware update which remedies many of these&hellip;

Summary : For fans of SNK’s fighters, Neo Geo X Mega Pack Volume 1 is an advisable purchase. At the very least, Neo Geo X owners should purchase at least one of the Neo Geo Classic cards, if only for the included firmware improvements.