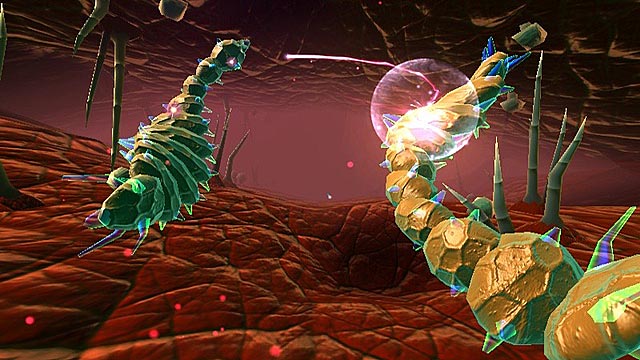 Anyone who’s ever read Carl Zimmer’s Parasite Rex knows how unsettling the microscopic domain can be- a realm where tiny organisms are capable of castration, mutilation, disfigure, and even zombification. Far worse that the hackneyed horrors of cinema, parasitic infestation is frightening because of its actual existence in our world- from the uncooked fish that hides a worm capable of eating away at our liver or the mattress which houses up to 10 million dust mites. It’s little wonder that more games haven’t used these repugnant protozoa and amoebae as cannon fodder.

With a visual style which imitates the peculiar glow and sharp contrast of an electron microscope, recent 3DS release Nano Assault places players within this exotic-looking dominion. Gamers are tasked with terminating a volatile contagion known as the Nanostray virus (named after the developer’s previous series of DS shmups), before the impurity seizes control of every life form known to man. Fortuitously, saving the world is a feasible consequence for players with a solid sense of depth perception, nimble reflexes and about five hours of free time on their hands. 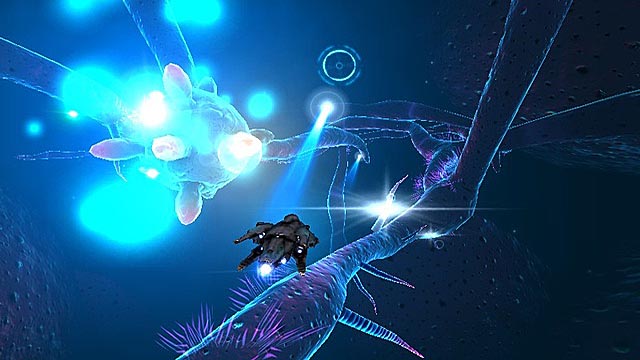 The game’s thirty-two stage story mode alternates between two types of gameplay. What the instruction manual refers to as “twin shooter” levels, evokes Housemarque’s PS3 satisfying shooter- Super Stardust HD. As players glide above substantial three-dimensional cells, they are required to locate three DNA strands while eliminating any encroaching hostiles. While your ship puts out a formidable stream of protozoa-popping projectiles (and is capable of delivering a wide shot, as well), the game’s sluggish camera compels gamers to keep their surface-skirting speeds in check. Additionally, enemies have the habit of dropping down right in front of players, which can lead to a few frustrating deaths.

While these ground-based sequences have a few minor blemishes, they still fare better than Nano Assault’s flying sections. Here, players guide their ship through on-rails environments, similar to the Star Fox series. Using the circle pad, both simultaneously control ship the on-screen location of their ship as well as the placement of crosshairs. Typically, this means players will be rapidly fluctuating between dodging opponent fire and moving to a position where a torrent of bullets will whittle away at an opponent’s health bar. Although, gamers have the limited use of several secondary weapons, a lock-on armament might have elevated Nano Assault’s airborne sequences. Regardless of the 3DS’s depth slider setting, it can be difficult to gauge the distance of incoming enemy fire, obligating players to move in circular attack patterns. As such, Nano Assault’s secondary segments can feel more like a modern version of Space Harrier with players constantly whirling around the screen, instead of evoking the delicate dance around projectiles common to bullet-hell shooters. 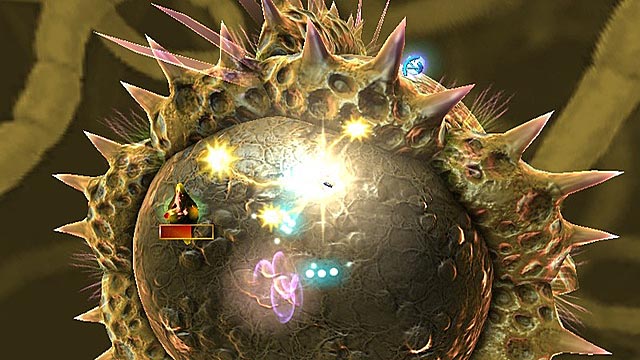 With the inclusion of separate Boss Attack mode, it’s clear that developer Shin’en toiled to make each of the title’s punctuating confrontations feel exceptional. While these altercations rarely transcend the prototypical hunt for patterns and weak points, each encounter is challenging without becoming overwhelming. Beyond battling the game’s heavies, players can also replay stages in the score-driven Arcade Mode, posting proof of their conquests upon the game’s online leaderboards. While Play Coins can be used to purchase information for the title’s Nanopedia, a scant amount of enemy data is offered. More interesting is the ability to buy songs from the game’s driving soundtrack, with each track conveying a sense of urgency and exoticism above a rhythmic electronic throb.

Like previous Shin’em shmups, Nano Assault offers exceedingly attractive visuals which help to elevate other serviceable game mechanics. As an exhibition of the 3DS’s capabilities, careening through organic passageways teaming with parasitic pests is a treat for the eyes. It’s slightly disheartening that some of the title’s mechanics don’t engage synaptic systems in the same way. As it stands, Nano Assault is engaging at times, but not consistently absorbing enough to find a way to get underneath your skin. 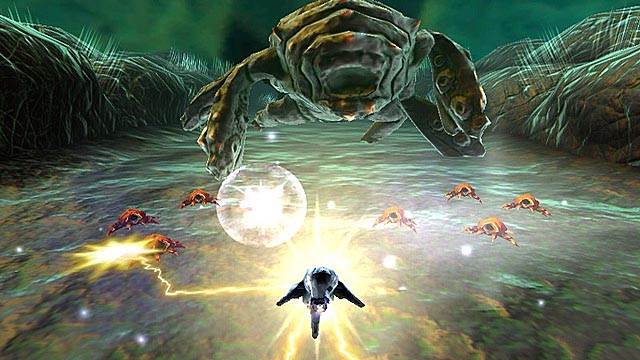 A copy of Nano Assault for the 3DS was provided by the publisher for review.