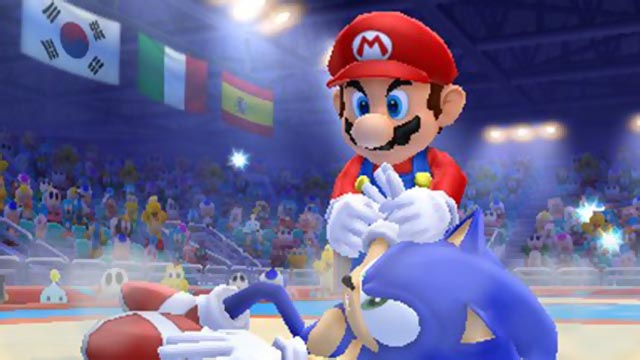 Few games reveal the gulf between critics and consumers as well as the Mario & Sonic at the Olympic Games series. While the aggregate review score for the three Wii iterations has loitered around the midranges, purchasers have paid little attention to these assessments, snapping up over eighteen million copies. At least a portion of this discrepancy can be attributed to critics- who are a decidedly different demographic than series’ intended audience.  With the release of Mario & Sonic at the London 2012 Olympic Games, the discord seems destined for resolution, with both groups fated to find the 3DS version to be an uninspired effort.

With fifty-five different events spread across ten categories, the cartridge easily matches the variety of sports found in the Wii iteration of the title. Yet consistently, recreations are scaled back from the console version. Whereas Beach Volleyball previously offered a moderately convincing interpretation of the pastime, the 3DS version removes player positioning. In execution- receiving, tossing, spiking, and blocking are all handled with the “A” and “B” button, reducing the sport to WarioWare-esque simplicity. As such, this impairs any sense of simulation; matches feels less like volleyball than a procession of four or five quick time events.  Likewise, the game’s rendition of Weightlifting is a simple as yelling into the 3DS’ microphone when an oscillating marker hits the middle of a power gauge. With no control over the duration of each activity, recreations are also curiously brief; team Badminton matches compete for three points, while cycling heats completed in a matter of seconds. 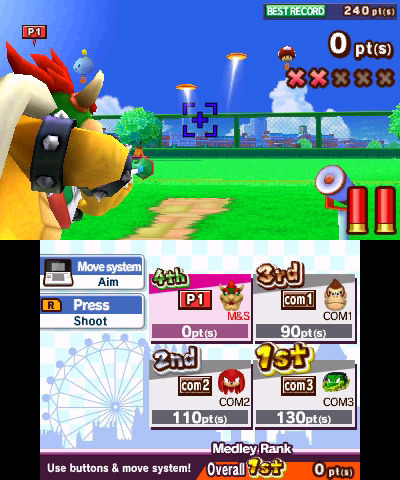 Fortunately, not all of Mario & Sonic’s events are as reductive, with a handful inspiring multiple tries from gamers. Double Trap, for instance, uses the portable’s gyroscopic function, tasking players with shooting down two arcing clay disks. By twisting and tilting the 3DS, players move an on-screen cursor; although it spoils the system’s 3D-effect, the mini-game can be distracting exercise once players immersive themselves in the control scheme. Recalling the cadenced stylus swipes of Elite Beat Agents, Rhythmic Ribbon is another enjoyable recreation, with players tapping, sliding, and drawing circles to simulate the flourishes of an energetic gymnastic routine. Football boils soccer down to scoring on a throw in, which players pulling back on the circle pad to choose their trajectory. A well timed release can propel the ball past a defender or two, resulting in a satisfying crowd cheer.  Not only is the game challenging, but the perspective from the playing field exhibits the power of the 3DS.

An inconsistency in the complexity of events is also echoed in the variety of input schemes used in the game. From alternating finger taps in 100 Meter Freestyle Swimming, simultaneous direction pad and button presses in Judo, accelerometer input in Horizontal Bar and microphone blowing in Sailing, nearly every conceivable control permutation is used in Mario & Sonic. To exacerbate the complication, even similar events have different input methods: individual archery uses the stylus to direct each shot, while the team variant requires players to aim by moving the system around. Whereas the Wii iterations of Mario & Sonic have consistently allowed for both Wiimote and Nunchuck control as well as play with a solitary Wiimote, this version imposes its input methods on players. Ideally, players would have been offered selectable control options for each mini-game. What’s more, the roster of available participants for each event is limited. Instead of choosing an avatar from Nintendo and SEGA’s broad membership, players choose from one of four preset character for most sports. While the move from disk to cartridge means memory is at a premium, it’s disappointing to not be able to take control of your favorite character. 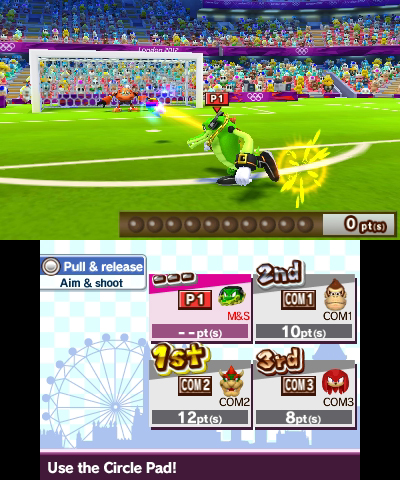 Inexplicably, Dream Events- the series hyperbolic and most gratifying recreations have gone missing, along with the Wii version’s lively London Party mode. In their absence, players have access to both local and download play with up to four competitors as well as Story Mode. The later offers an impetus for players to try every event, as they try to stop Bowser and Dr. Eggman from sabotaging the Olympic Games with impenetrable fog. Although the campaign’s dialog is a bit contrived, the visuals are pleasing and the character models in the cutscenes are eye-grabbing. Although Mario & Sonic’s gameplay can be humdrum at times, the game is quite a performer with solid framerates, short load times, and vibrant visuals.

For the right audience, the Wii version of Mario & Sonic at the London 2012 Olympic Games could be a crowd-pleaser capable of cultivating heated matches.  Unfortunately, the abridged events and absence of key play modes undermine the 3DS iteration, leaving behind a robust collection of mini-games which would be out of place on any smartphone. Woefully, players may walk away from the title feeling that Nintendo and SEGA’s famous mascots have delivered a performance that scarcely deserves a perfunctory bronze medal. 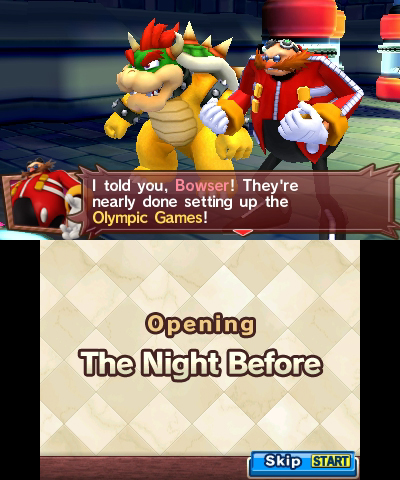 A copy of the game was provided by the publisher for review purposes.