Mario and Sonic at the London 2012 Olympic Games Review 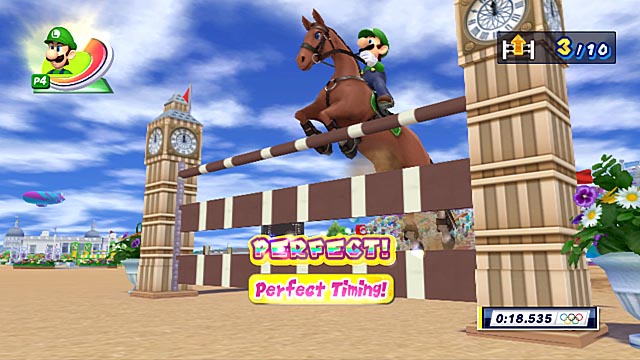 With the potential of making a record-setting tenth appearance at the 2012 London Summer games, Canadian equestrian Ian Millar embodies the spirit of Olympic resiliency and determination. Yet, with a third appearance at the international competition (following forays at both Beijing and Vancouver), gaming luminaries Mario and Sonic similarly show little indication of slowing down. The recent Wii release of Mario and Sonic at the London 2012 Olympic Games once again demonstrates the duo’s ability to generate an energetic, Wiimote-waggling good time.

Regretfully, the plumber and hedgehog’s previous Olympic experience is also one of their primary impediments.  With a handful of events given recycled from 2007’s Mario and Sonic at the Olympic Games, there is an undeniable aroma of familiarity which lingers through London. Table Tennis still draws inspiration from Wii Sports Tennis, automatically moving the on-screen athletes, allowing players to concentrating on the timing and angle of each return. Beyond a slight change in ball physics, competitors are able to launch character-specific smashes, which is now the crux of success. Conversely, super moves help elevate the recycled bouts of fencing- although the sport’s finesse and strategy are still lost within the sessions of wild Wiimote thrusting. London 2012’s Shooting replaces the Olympic Skeet event of the 2007 title with rounds of spinning, moving, and alternatingly sized targets, recalling Namco’s Point Blank series. Clearly, SEGA tried to give each mini-game a fresh perspective, but it would have been nice to have seen pristine events in 2012’s roster. Sports such as Judo, Taekwondo, and Field Hockey would have made sensible additions considering they are all part of the actual summer Olympic schedule. 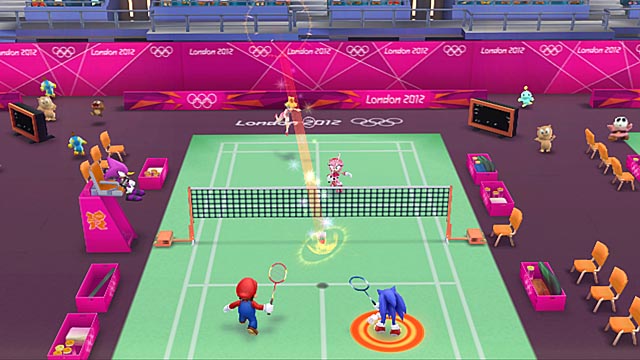 The majority of the title’s new competitions are enjoyable, each loosely built with the blueprint of victorious mini-games. Rhythmic Ribbon tasks players with cadenced controller movements as well as gentle Wiimote spinning and balancing. Although not far removed from the tempo-based tests of Guitar Hero, the event is undeniably amusing when beefier characters like Dr. Eggman prance around the mat. With penalty kicks and the capacity to foul players, Football is surprisingly robust, recalling the full-bodied sporting events found in Mario Sports Mix. Consistently, the highlight of the Mario and Sonic series has been the inclusion of Dream events- games which shirk almost all semblance of sporting simulation. Here, the Triple Jump is reimagined as a slide-scrolling level right out of Yoshi’s Story while Discus throwing involves a riding the equipment like a flying saucer, collecting rings while smacking other players out of the way. Like similar titles, these contests become exponentially more enjoyable and animated with each additional player in the competition.

While Mario and Sonic at the London 2012 Olympic Games might be a bit stolid for solitary players, the developer did endow the game with a few pleasing hooks to sustain the interest of a lone gamer. The completion of each event rewards players with a scratch-off ticket, with the potential to earn music tracks from Mario and Sonic games or attire for a Mii which is participating in any of the title’s events. Pleasingly, even non-winning lottery tickets can be collected and traded for unlockable items. Pleasingly, the game also delivers a number of gratifying ancillary elements- from emails congratulating players on their accomplishments to medal displays on the event menu, which showcase a player’s progress. Notably absent is the ability to recreate an itinerary of events which replicate the procession of the summer games. 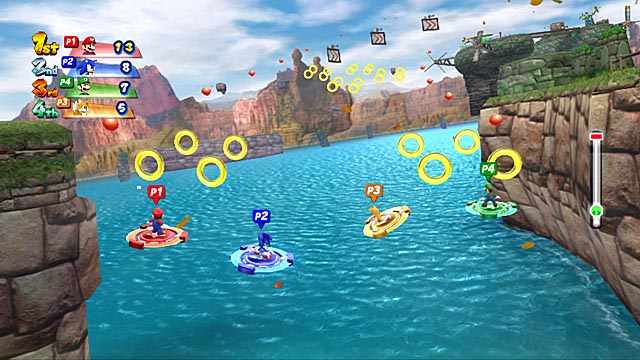 Compensating for the omission is the title’s London Party, which transposes the action to a playfield modeled after the English capital. The goal here is to collect a preset number of stickers in a tourist booklet before your competitors do. These prizes are distributed after each of the game’s contests, which commence every time Big Ben sounds its legendary peal or players bump into roaming characters on the map. Smartly, this game mode contains some of disk’s most enjoyable moments, with a number of cooperative tasks, trivia challenges as well as simultaneous play, which helps keep the action moving at a pleasing pace.

While hardcore elitists may dismiss Mario and Sonic at the London 2012 Olympic Games unassuming action, there’s hardly title coming out this season that’s better suited to households with multiple younger gamers. Quite simply, the title has the capacity to foster friendly rivalries between a group of Wiimote-toting participants, ensuring Mario and Sonic’s contests will be around for future (console) generations. 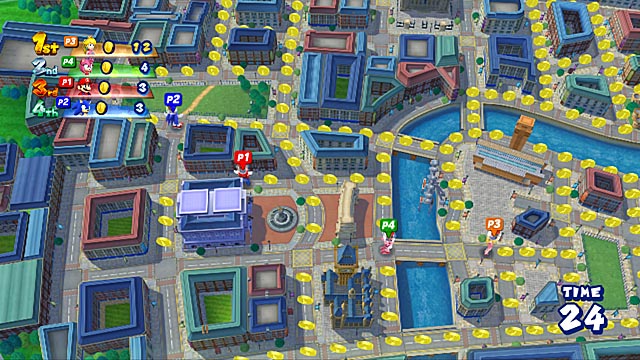 Previous: Sonic Generations (3DS) Review
Next: New Releases for the Week of December 4, 2011