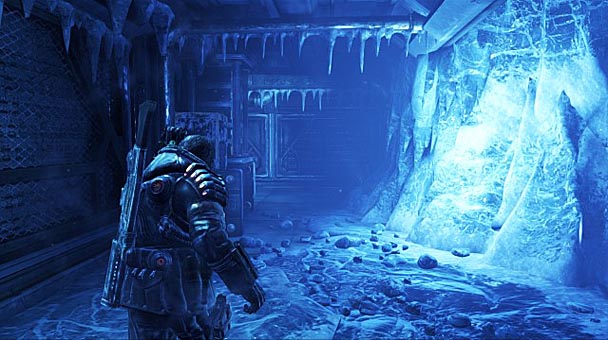 Game franchises typically follow an evolutionary trajectory, with each successive iteration gradually building on the strengths of its predecessor. Capcom’s Lost Planet series has followed a route filled with pervasive renovation. 2006’s Lost Planet: Extreme Condition extended an eccentric and exhilarating single-player campaign, complemented by diverting multiplayer matches. Four years later, Lost Planet 2 transformed the IP into a cooperative-oriented shooter punctuated by bombastic boss battles. For the latest entry in the franchise, Capcom handed over developer duties to Spark Unlimited (Turning Point: Fall of Liberty, Legendary), a Western developer who scrapped everything from signature mechanics to the game’s engine- crafting a prequel which shares little more than the desolate artic setting of the inaugural title. Although many of the studio’s intentions are noble, Lost Planet 3 largely stumbles amidst the game’s slipshod execution.

Whereas Capcom’s previous installments offered deadpan cinematics to drive the action, Lost Planet 3 grounds its bug quashing in a sporadically stirring narrative. The game’s opening sequence introduces players to aging protagonist Jim Peyton (bearing an uncanny resemblance to Christopher Lee), who is seemingly spending his final moments disclosing salient memories to his granddaughter. Told in flashbacks, we learn that Peyton’s motivation to seek work on the adverse environment of E.D.N. III was to provide for his wife and newborn son. Once the game transitions to the past, we see glimpses into this relationship, depicted through the exchange of video journals. These elements prove to be one of Lost Planet 3’s best decisions- rendering Peyton as an everyday protagonist we can empathize with, rather than the traditional superhuman lead of most games. 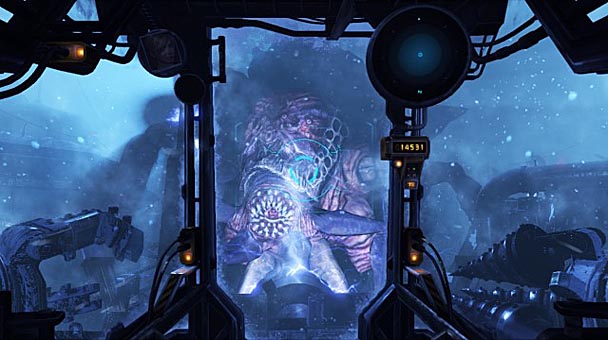 Small details such as the picture of his wife that Peyton keep on the dash of his drilling rig or the ability to cue up the twangy tunes sent by the spouse make the relationship all the more credible. Regretfully, Jim’s interactions with others aren’t as convincing or poignant. Early rapport with Gale (the wool-cap clad, eye-patch wearing character in the first game) shoehorns comic relief into the title, but the scenes often feel flat, with Payton incessantly referring to the young engineer as “kid”. Similarly, Lost Planet 3’s cast of NPCs play out like a guide to outdated ethnic stereotypes, extending tropes like the aloof, libidinous Frenchmen. On a larger scale, the game’s overarching narrative feels a bit hackneyed, offering a predictable plot that focuses of the evils of industrial exploitation against an unsullied ecosystem.

Although Lost Planet 3’s inclusion of a home base and open ended mission structure seem like promising design decisions, the implementation leaves a bit to be desired. The dingy, underground facility helps to convey the notion of stalwart colonists facing a dual pronged assault of relentlessly antagonistic Akrid and a merciless landscape. Yet, navigating through the outpost is a plodding affair, with upgrades, rig bays, and command centers separated by lonely hallways, elevators, and sluggish loading screens. The game’s exteriors fare a bit better, mixing twisting, claustrophobic passages with wide-open areas- yet they are also beset by load times which tarnish a sense of immersion and bearing. 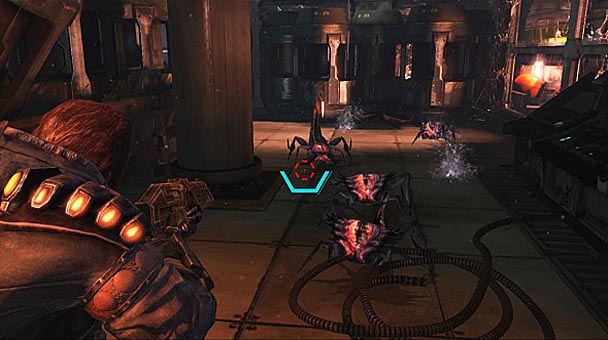 Combat is broken into two core components: ground-based ranged conflicts and melee clashes conducted from the confines of your hulking, bipedal rig. The former introduces a cover based system to the franchise- but curiously, adhering to the side of wall or duck under protective pieces of the environment rarely feels compulsory. Confronting smaller Akrid (and later humanoids) feels underwhelming, with dimwitted foes making a beeline at players or mindlessly poking from cover at regular intervals. Scrapping with medium-sized creatures is a bit more satisfying, usually tasking the players with a well-time dodged move, before targeting the beast’s glowing weak point. Periodically, QTE’s break up the shooting, requiring a rapid fire button press or aiming of a wrenching crosshair. T-ENG has been transformed into a currency and is no longer necessary for survival, removing much of the urgency from the extermination of lesser foes. A constrained arsenal which only permits basic upgrades and the general chunkiness of shooting also exasperate the tedium of combat.

With the absence of armed mecha-like vital suits, Jim’s utilitarian rig is the outlet for vehicular confrontations. Although these segments offer a divergent viewpoint from the third-person ground warfare, the first-person perspective isn’t without its difficulties. Notably, the player’s peripheral vision and sense of range is hampered- resulting in the rig clumsily striking pieces of the landscape and comically whiffing at foes. That said, rig-based fights provides some of Lost Planet 3’s more invigorating moments, whether through the splashes of orange Akrid blood on the windshield of your rig or through the gratification of using a giant arm to cleave a claw from an aggressor. 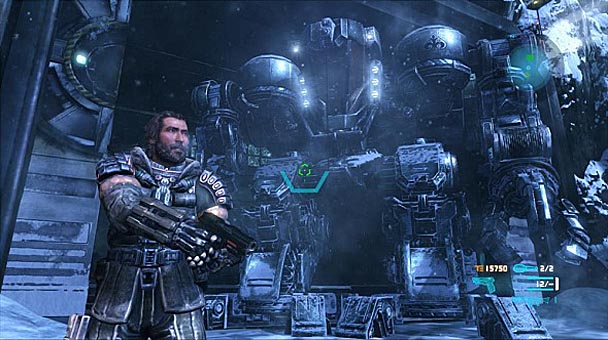 Curiously, Lost Planet 3’s multiplayer component plays and looks like a completely different game. Beyond the return of agile and well-armed vital suits, an archetypal progression system which offers a succession of new weapons, abilities, and gear, matches are elevated by variable objectives. One of the best variants toys with player allegiance, first forcing teams to work cooperatively to repel an Akrid assault. Midway through the match, combatants are then forced to take command of a control point as the opposing team and insectoids rush in. While the game’s six maps do encourage gamers to make use of their grappling hook, woefully these venues lack the verticality of Capcom’s original title. 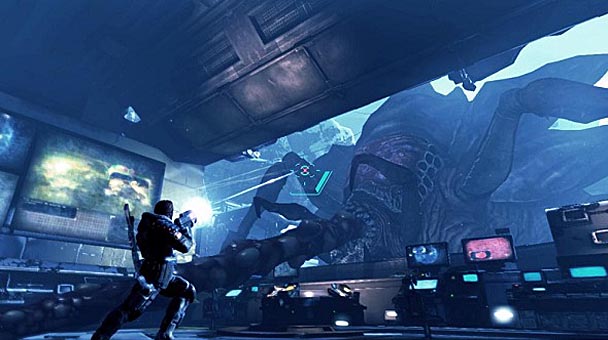 Lost Planet 3’s single and multiplayer matches may have different visual appearances, but they are united in mediocrity. Even with the installation of post-launch patch, the PlayStation 3 version of game stutters incessantly, as the Unreal Engine struggles to hit a thirty FPS framerate. With diminutive draw distances, blotchy textures, and disjointed animations, the game’s visuals undoubtedly lack polish. The emergence of several vexing gameplay bugs during the course of the twelve-hour main campaign reveal that the flaws aren’t merely aesthetic.

Lost Planet 3 is the uncommon sequel that is inferior to its predecessors. Certainly, some of the game’s foundational design decisions are prudent, integration a more personal story in the franchise and extending an open-ended path for players. Yet, it’s the title’s lack of polish which impedes these concepts from reaching fruition. For a franchise rooted in engaging combat, too often Lost Planet 3’s clashes feel underdeveloped and aren’t as engaging as they should be. Much like Ninja Theory’s handling of DmC: Devil May Cry the essence of the Lost Planet seems to have been lost amidst the game’s journey westward.

Lost Planet 3 was reviewed on the PlayStation 3 with review code provided by the publisher.

Summary : An occasionally stirring storyline and the addition of autonomy are weighed down by clunky, bland combat and some nagging performance issues.