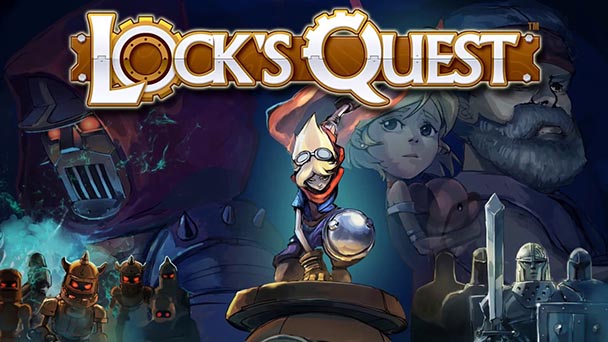 The game industry’s fondness for remasters and reissues likely leaves gamers with an unshakable sense of déjà vu. Selections for reinvigoration are typically drawn from the lucrative, intended for a large audience who is well-acquainted with the property. As such, the Steam release of Lock’s Quest is a pleasant surprise. While developer 5th Cell would go on to reap commercial success with the Scribblenauts series, the 2008 release of Lock’s Quest was tragically overlooked by the gaming public. So as the pleasing variation of tower defense isn’t lost to the ages, the team at Digital Continue has reworked the title, giving the unsung title a second chance.

Players assume the role of the eponymous lead, who lives is a peaceful coastal hamlet alongside his sister and grandfather. But tranquility is quickly undone by an army of automatons known as Clockworks. Commanded by Lord Agony, the robots invade the lands, forcing Lock to protect his village by developing a defensive system as well as fight the invaders directly. The game’s storytelling method, uses role-playing like character portraits and text, might not seem verbose enough to make an impact. But with a couple of quality plot-twists and a poignant final scene, Lock’s Quest is a remarkably good raconteur. 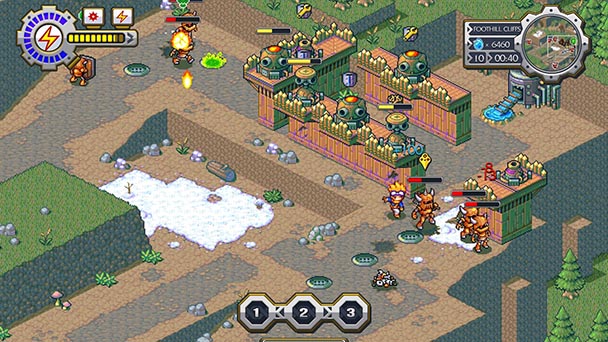 Each successive stage is split into two parts. Initially, there’s building, where players have two minutes and a limited amount of currency to construct a defensive system. Using either a mouse-and-keyboard or gameplay-based control scheme, players place towers, cannons, machines, and traps around each isometric battlefield. With a countdown timer indicating the time until the assault, this component doesn’t feel far removed from Rampart.

But unlike the classic Atari title, strategy is more than just filling in any gaps in your exterior walls. Sure, you’ll want to make sure any encroaching Clockworks won’t be able to make a beeline toward the interior of your base by placing plenty of obstructions. But since the robots sent to approach from a multiple of directions and you’re protracted movement speed prohibits you from guarding the entire battlefield, towers and machinery are a must. Like any respectable entry in the tower defense genre, there’s a solution for every problem. From Basic Turrets that pepper foes with fire, Goo Launcher that fling a speed-reducing substance, to Splash towers that offer area-of-effect assault, there’s a decent variety of armaments, each with it’s a distinctive firing speed and range. 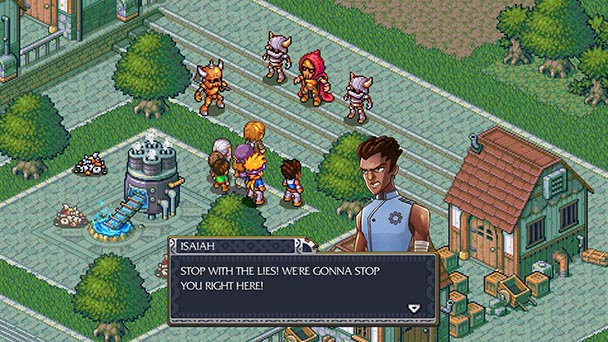 Likewise, there are traps, like acid-splashing tripwires and Freeze ensnarements that players can place on the paths of incoming Clockworks. While your constructions receive defensive bonuses based on any structures that flank them, players can also use Helpers, which do things like automatically repair damaged walls, or even increase the range of adjacent turrets.  Conveniently, players don’t have to worry about tech-trees as Lock’s Quest growing arsenal of weaponry is handed out as the story progresses.

Being that the source material is a nine-year old Nintendo DS games, Digital Continue’s decision not to tamper with the title can cause a few problems. Most mechanics have been adapted adeptly, such as stylus scrubbing changes into a flick of the right analog stick. But the game’s static perspective can produce problems. Since you can’t move the camera around, it can be a bit too easy to leave a single-block opening in one of your walls, allowing Clockworks easy entry. 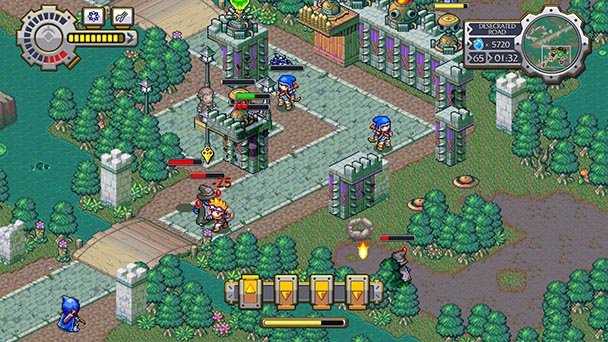 After two minutes of building, players confront a cavalcade of antagonists, who range from shambling foot soldiers, archers, healers, to slow-moving brutes. Moving Lock into an enemy automatically triggers a fight between units, while making a retreat mends the hero. Periodically, quick-time events will appear on-screen and if players can nail the button sequence, they’ll be able to hit harder, often delivering a killing blow. Lock is also privy to a quartet of special attacks, which offer abilities to strike all on-screen Clockworks with lightning or repairing all damaged buildings, potentially reversing the tide of battle.

Given the game’s nearly decade-old age, Lock’s Quest looks surprisingly solid. Digital Continue has made the best out of the 256×192 output of the original game, scaling nicely to widescreen monitors. Sure, everything but the character portraits used during dialog and user interface looks pixelated. But there is an undeniable charm to the sprite-based graphics, recalling the output exhibited by SNES revivals. Another perk is the wider viewing perspective, and by seeing more of each stage, it’s easier to bring a halt to attack waves.  Sonically, the game’s soundtrack has been modified, with what sounds like better MIDI instrumentation. The adjustment might not please purists, but the audio doesn’t sound too antiquated. 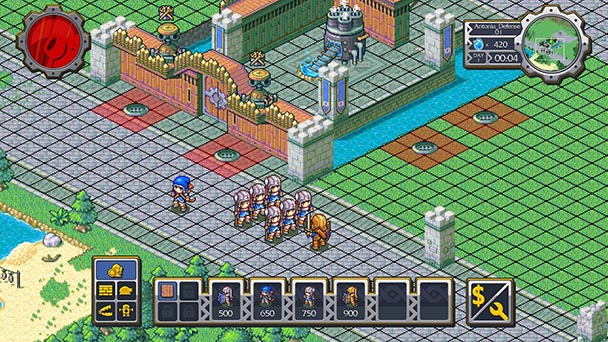 On the downside, the port summons a few issues that weren’t in the original game. When using mouse-and-keyboard, pathfinding is problematic, which clicking on combat combos requires superfluous precision. But even playing with a controller doesn’t solve all of the remaster’s hitches. From the lack of aural warnings when structures are about to be destroyed. Clockwork AI seems to have been tweaked. As such, they favor attacking buildings over Lock which effects the difficulty of some stages. Then, there’s the occasional graphical glitch or freeze that demands a restart. In its current state Lock’s Quest could use some patching.

Despite these issues, Lock’s Quest remains largely enjoyable. As such, if you were one of the lucky few who played the prodigious third-party title, Digital Continue’s remaster is mostly adept and wholly affordable. Those who aren’t acquainted with 5th Cell’s DS title will find an engaging experience, but one that feels a bit dated when compared to more modern action-TD contemporaries like Orcs Must Die and Dungeon Defenders. THQ Nordic should be commended for bringing out an underdog from their back catalog.

Lock’s Quest was played on PC with review code provided by the publisher.

Lock’s Quest
Platform:
PC, Playstation 4, Xbox One
Developer: Digital Continue
Publisher: THQ Nordic
Release date: May 30th, 2017
Price: $14.99 via Steam (PC), $19.99 via retail or digital (console)[pullquote][/pullquote]
Lock’s Quest review
The game industry&rsquo;s fondness for remasters and reissues likely leaves gamers with an unshakable sense of d&eacute;j&agrave; vu. Selections for reinvigoration are typically drawn from the lucrative, intended for a large audience who is well-acquainted with the property. As such, the Steam release of Lock&rsquo;s Quest is a pleasant surprise. While developer 5th Cell would go on to reap commercial success with the Scribblenauts series, the 2008 release of Lock&rsquo;s Quest was tragically overlooked by the gaming public. So as the pleasing variation of tower defense isn&rsquo;t lost to the ages, the team at Digital Continue has reworked the title,&hellip;

Summary : The PC port of Lock’s Quest shows the virtue of the nearly decade old title. But it’s always undermined by a few bugs that can dampen the experience.