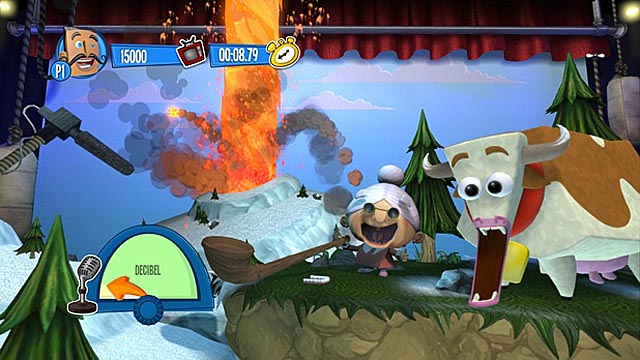 What is the concept? As both the Wiimote and Microsoft’s Kinect peripheral have demonstrated, motion-sensing devices have helped the mini-game genre to proliferate. Similarly, Sony’s Move controller has spurned an assemblage of wand-waggling titles, from the recreation of popular athletic activities found in Sports Champions, the midway-inspirited challenges of Carnival Island, and even the shiatsu and massage diversions buried within Record of Agarest War 2. Recent PSN release Lights, Camera, Party! perpetuates this trend, adding a competent, family-friendly collection of concise micro-competitions to the PlayStation 3’s digital library.

The game’s premise centers on a simian-staffed television station whose attempt to put a satellite in orbit ends with the rocket crashing into the Funzini family’s residence. Hoping to mitigate the disaster, vivacious anchor Gus Pacho invites the five-member family onto a seemingly impromptu game show, offering a change to win a dream house. Lights’ story campaign has the five members of the Funzini clan vying for architectural choice, from Papa’s candy-coated craving, to young Billy’s yearning for a cowboy-themed casa.

Competition is handled though the title’s selection of fifty mini-games, which offer offbeat challenges such as yelling at the PlayStation’s Eye loud enough to instigate an avalanche or twirling the Move controller overhead to in order to mollify a monster with a flung pizza. Recalling the brisk tempo of the WarioWare series, most of the game’s diversion last no more than fifteen seconds, elevated the cadence of Lights’ whimsical matches. 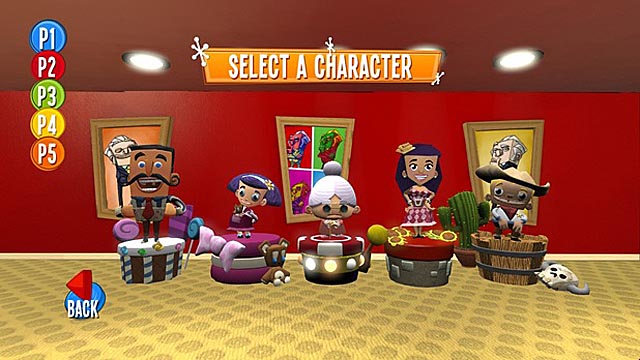 What are the game’s strengths? Utilizing the third iteration of the Unreal Engine, Lights, Camera, Party! is visually proficient, rendering Funzini members, monkeys, and environments in an aesthetic which wouldn’t seem out of place on the Saturday-morning television schedule. Save for the rare instance of late texture pop-in and a bit of forgivable frame loss when displaying a picture-in-picture effect, the game is brimming with vibrant, charm. Whether exhibiting a bouncing teddy bear flaunting virtual fabric or displaying the amusing post-event cinematic (Disarm the Warhead’s fail animation renders a comical explosion which never fails to illicit a group chuckle), Lights is one of the better looking mini-game anthologies. Pleasingly, the game’s load times are relatively transitory, masked by screens which show the input methods for each diversion.

Although attractive graphics are advantageous, these type of compilations survive on the effectiveness of their control schemes. Fortunately, most of Lights’ mini-games handle intuitively. Save for the challenges which task gamers with movement in the Z-axis, such as a variant on Whac-A-Mole where players reach forward and back in space to pound on the heads of springing felines, most of the title’s trials feel responsive and control naturally. Regrettably, there is a notable difference in the difficulty of events- with activities which only require controller movement being remarkably easier. Expect accusations of inequity from Lights’ younger participants, especially since challenge levels can’t be set independently for each player. Agreeably, the game does scale to the number of available Move controllers, with the ability for up to eight players to pass a single device around. 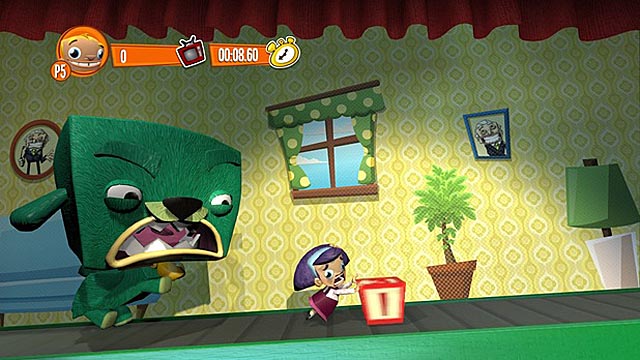 What are the game’s weaknesses? Although Lights, Camera, Party! provides a challenge option for solitary gamers, the mode’s static difficultly level and ‘fail once and you lose’ approach will be off-putting for most casual gamers. Groups expecting interaction in the title’s events may be disappointed. Unlike the Mario Party series, which often has games with a quartet on on-screen players competing or cooperating, Lights’ recreations accommodate only one player at a time.

A constrained amount of content is the game’s other fundamental disadvantage. Until players unlock a portion of the title’s mini-games, competitions are plagued by repetition. While that shortcoming eventually receives remedy, the announcer’s quips and limited number of playable characters never grow, causing Lights, Camera, Party! to lose its luster rather quickly. With is particularly evident during games with more than five players, as participants are forced to double up on the Funzini Family’s abridged number of avatars. 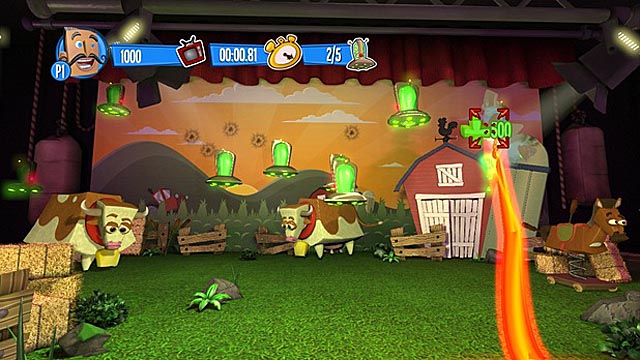 Is it worth the money? Players ravenous for a Move-enabled title are likely to find that Lights, Camera, Party! offers only a few evenings of spirited fun before the tides of tedium swell. While those consider about a purchase at the game’s standard $29.99 MSRP, may want to think twice, PlayStation Plus subscribers can currently grab the download at a 50% savings, making a purchase of Lights justifiable for households looking for a lively reprieve before fall’s trusty flood of must-play titles.