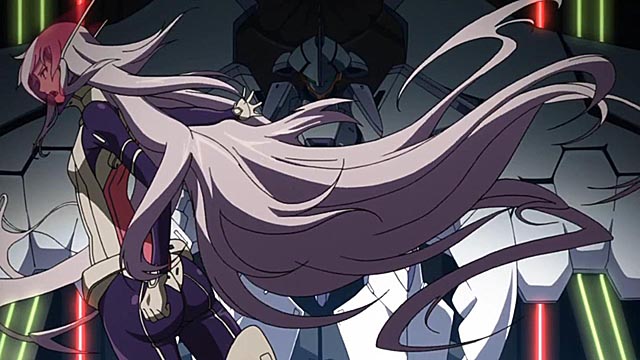 Echoing Shorties’ precedent, Guild01 has followed a similar fate. Originally a 3DS cartridge comprised of a quartet of titles, each directed by a different Japanese luminary, the anthology is being distributed digitally via a piece meal approach. With diversions which range from Aero Porter, an airport baggage handling simulation to Crimson Shroud, which hopes to return the role-playing game back to its dice-rolling roots, the collection is undeniably quirky. So while it’s not surprising that the most conventional game serves as the compendium’s opening salvo, finding out that eccentric auteur SUDA51 is behind Liberation Maiden is somewhat startling. 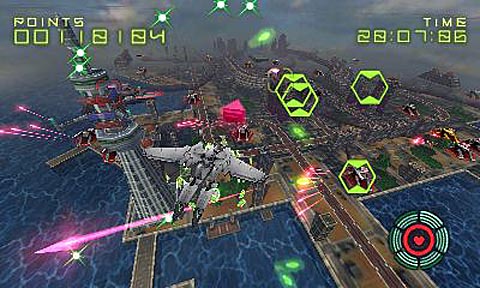 Although the game’s opening cinematic, created by celebrated anime studio Bones, (Fullmetal Alchemist, Darker than Black: Kuro no Keiyakusha) delivers the occasional leering butt shot, most additional instances of Goichi Suda’s trademark impishness resist discovery. Admittedly, the game’s backstory, centered on New Japan confronting a tyrannical foe by putting the president’s daughter in the cockpit of a giant mech, sounds absurd. Yet, Liberation Maiden’s story shirks the satirical tone that is common in Suda’s output, contributing a plotline that’s uncharacteristically earnest. Elegantly, developers Grasshopper Manufacture and Level 5 understand that players yearning for maniac action may not want to be bombarded with a bulk of narrative nuance. Therefore, ancillary points and artwork are unlocked as players persevere through the game’s campaign.

The title’s four main stages task the game’s protagonist, Shoko with piloting her persistently airborne robo-suit across a variety of vibrant-colored environments while beating back a sprawling enemy. Maiden’s opposition comes in several forms: from lesser units adept at expelling substantial amounts of projectiles to larger, screw-like conduit spikes which are entrenched in New Japan’s terrain like cybernetic ticks. Punctuating each stage and serving as the game’s fifth level are gripping boss battles which really escalate the intensity of Liberation’s Maiden, especially on the game’s highest difficulty level. 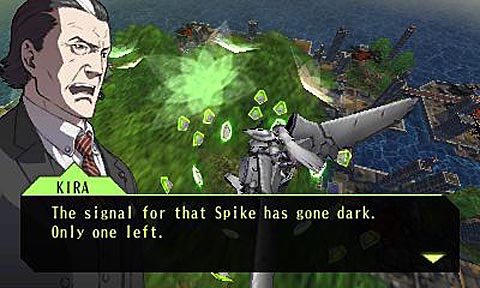 Using a stick and stylus control method that’s similar to Kid Icarus: Uprising and Metroid Prime Hunters, players guide the nimble mech with their right hand, while using the touchscreen to aim their weaponry. Initially, players are given access to lock-on missiles which swarm upon highlighted foes. Later, Liberation Maiden’s arsenal is augmented with a laser which cleaves through foes like a fastidiously whetted katana. Agreeably, Shoko’s success hinges on a delicate balance with the ferocity of an attack correlated to the number of Deflector Nodes that surround her suit. Since scanning for lock-on targets leaves players susceptible while successful strings of attacks bolster your resistance, Maiden favors a fluid play style which keeps gamers shifting between pugnacity and protectiveness.  Regretfully, no provisions for left-handed players will hinder southpaws from becoming immersed in the battle for New Japan.

For others, Liberation Maiden’s other blemish will be its length, with gamers able to overcome the game’s five stages in about two hours. Mirroring the mechanics of most shooters, score chasers have a number of incentives to revisit the title, from levels which challenge players to completely purify the landscape to a stage attack option where gamers can jockey for a spot across the off-line leaderboards. Since each level has a distinct visual style and a slight gameplay variation (there’s even an innocuous stealth section crammed in there), players seem poised to have a preferred level. 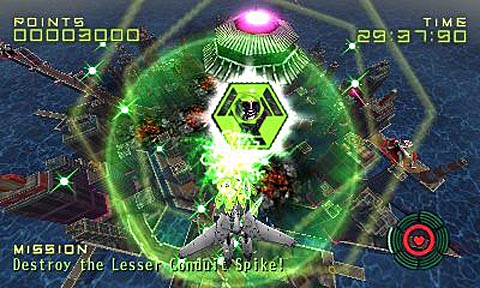 As the inaugural progeny of the Guild01 collection, Liberation Maiden is an impressive feat, delivering an engaging shooter that’s unlike anything else in the eShop library. Elevated by animated cutscenes reminiscent of Rideback as well as gameplay which recalls Rez, the title would make an ideal addition to action fan’s SD card. With news of Guild01’s Omasse’s Rental Weapon Shop currently lacking a publisher (and word of Yasumi Matsuno leaving Level 5), the release of future stateside ‘game jam’ titles are hazy. So spending eight dollars on Liberation Maiden won’t just provide a weekend full of adversary annihilating fun, it’s also an indication of support for more variety in the digital marketplace. After all, seeing a sexy commander-in-chief straddle a death-dealing, freedom- fostering, mech might be the one issue capable of garnering unanimous support.