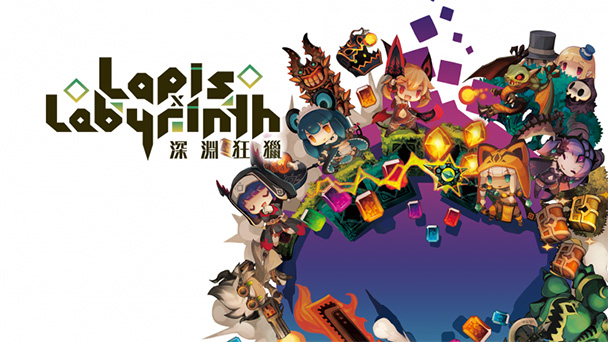 Button mashing is term to describe the act of hitting controller buttons in a wild act of desperation. It’s often used to describe a rookie trying to fortuitously trigger a combo or special move. Occasionally, it happens when players can’t control their temper. Either way, it’s derogatory.

But aggressively attacking buttons wasn’t always viewed negatively. During the arcade era, you’d often witness people forcefully thumping these circular, plastic switches while playing games like Double Dragon, Final Fight, or even the car and barrel-breaking bonus rounds from Street Fighter II. Given the simplicity of control schemes, these acts of ferocity conveyed proficiency rather than implying the player was frustrated and possibly outmatched. They were also wonderfully cathartic. 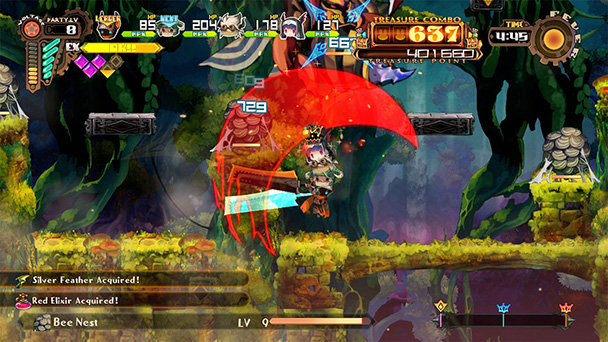 Players who pick up the PlayStation 4 or Switch release of Lapis x Labyrinth can expect to do a lot of the latter kind of button mashing. The title tasks players to guide a quartet of adventurers into a sequence of dungeons that are bursting with monsters and money. You’ll only control the actions of a single party member on the bottom, while the remaining members are stacked up in dango-like formation, ready to be tagged in with a tap of the shoulder button.

Make no mistake, you will be hammering the hell out of your Joy-Con or Pro Controller. Lapis x Labyrinth aims to submerge players in an ocean of chaos. Habitually, you’ll be encircled by dozens of foes and the only way to whittle away at their number is to furiously beat on your controller buttons. Each tap executes a strike on foes that causes integers to leap right off, divulging the amount of impact of each hit. 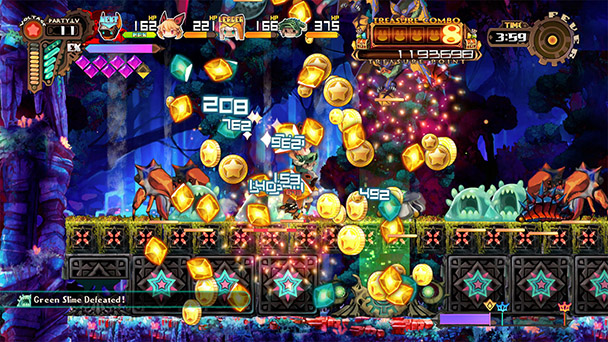 Movement in Lapis x Labyrinth is surprisingly simple and relaxed, permitting you to nimbly guide your foursome around with platformer-like ease. Players stack up jumps for each character in their party. So, if you have a full four combatants, you’re able to quickly scramble around the two-dimensional dungeons with ease. Well, at least until the game locks you into confined space, forcing you to eliminate all enemies before you can proceed. You’ll need this maneuverability, because if you have made your way to the exit by the end of the five-minute mark, death incarnate will home in on you. If you’re touched, your entire party must start their quest over.

What’s particularly interesting is how Lapis x Labyrinth forces players to shift up thinking styles. Much of the time you’ll be exploring stages, examining the level and hitting switches to open the level exit. When creatures inevitably converge on you, your brain will go into some kind of primordial mode to keep track of all the sprites encircling you, each telegraphing their own attack. Maybe it’s just me, but I got into a trance-like state while fighting foes, nearly missing my train station twice. Even if you’re not concentrating that deeply, there’s a lot to process cognitively. 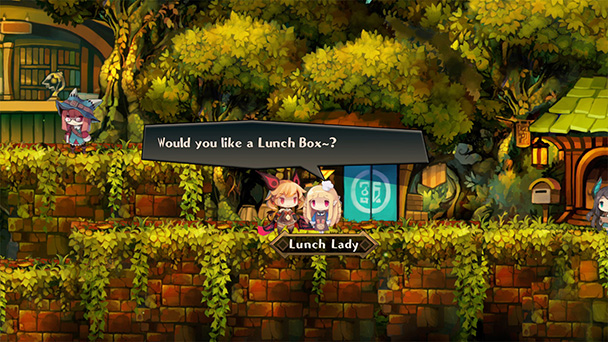 This is especially true during Fever Mode. Fill a gauge and this sequence triggers, dimming the background so you can enjoy the spectacle of sprites cascading down like firework embers. While fevered, you’re invulnerable, issuing players a temporary license to button mash. Here, antagonists pop like piñatas, showing the screen with gems that are automatically picked up. Even blocks in the environment are filled with jewel-candy. If all this wasn’t visual and mental overload, you’re also rewarded with gifts for every hundred gems you collect. When Fever Mode ends it feels like the last day of summer vacation. Every. Single. Time.

When you eventually complete enough dungeon levels or defeat a boss, you’ll be transferred back to town to tackle more cerebral activities. When fighting your brain goes into an auto-pilot, reacting as fast as it can to the onslaught of opponents. Here, time stops, allowing you to peruse and choose five different types of equippable (Armor, Artifact, Crystal, Snack, and Weapon) items. But you won’t just be able to select the best gear and go. Lapis x Labyrinth imposes a Gear Cost, forcing you into making tough decisions. You’ll also contend with the balancing teams comprised of characters from eight different classes. Likely, you’ll have to do a little experimentation with party synergy. I went in with a team of chibi gunners and charming maids and got my ass handed to me. 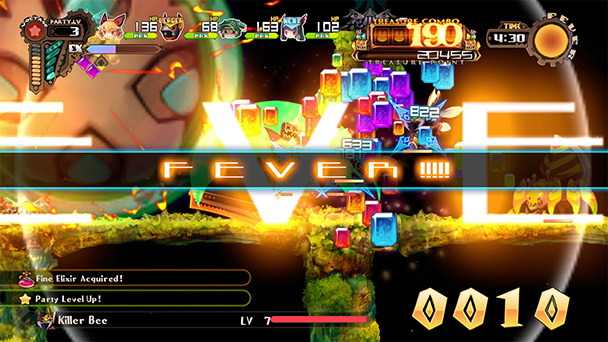 While the overarching goal according to the plotline is revitalization of the local town, the more immediate objective is leveling up your party members so they’re able to face Lapis x Labyrinth’s increasingly potent inventory of monsters. Fortunately, the gameplay loop is alluring, thanks to the intensity of combat. While you’ll have to do a bit of grinding, it’s rarely tedious thanks to variety across the game’s eighty missions.

What is slightly concerning is the lack of guidance. You’ll see screens of characters stats and enhancements but it’s not clear how those can be elevated until you open a dojo. And while you’re encouraged to cultivate a roster of more than four characters, the incentive behind the push isn’t obvious. Sure, you’ll have party members that have defensive affinity bonuses, but you can also brute force your way past these practices. While some will take issue with the inability to cancel attacks, I suspect many will be able to adapt to being locked into short animations. 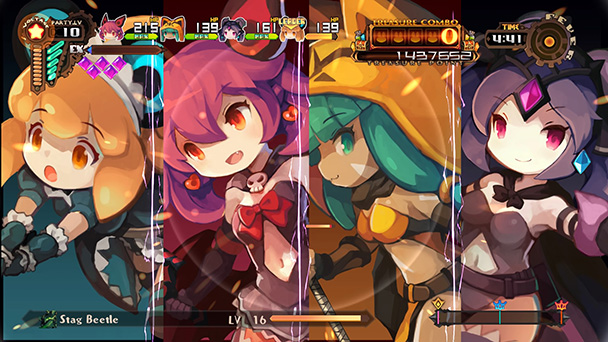 Aesthetically, Lapis x Labyrinth is astonishing, with lush visuals that can swiftly drain your Switch’s battery. Dungeons are drawn is a gorgeous painterly style, while diminutive characters flaunting personality. Of course, when environmental blocks are pulsating, gems are raining down, and monsters abound, it can be difficult to notice the details. Performance-wise, there’s the occasional instance of slow-down when hundreds of sprites are on-screen, but it’s infrequent enough to not be an issue. Musically, the game soundtrack draws from a multitude of global influences. Just make sure to turn down character voices so you can fully enjoy it.

Mixing chaotic Super Smash Bros.-style combat with an expansive campaign (and even post-game stages), along with dazzling visuals, Lapis x Labyrinth is a rousing success. With minimal storyline and play suited for five-minute bursts, it feels perfect for short pick-up-and-play sessions on the Switch. And given life’s numerous stressors, who doesn’t need some therapeutic button-mashing these days?

Lapis x Labyrinth review
Button mashing is term to describe the act of hitting controller buttons in a wild act of desperation. It&rsquo;s often used to describe a rookie trying to fortuitously trigger a combo or special move. Occasionally, it happens when players can&rsquo;t control their temper. Either way, it&rsquo;s derogatory. But aggressively attacking buttons wasn&rsquo;t always viewed negatively. During the arcade era, you&rsquo;d often witness people forcefully thumping these circular, plastic switches while playing games like Double Dragon, Final Fight, or even the car and barrel-breaking bonus rounds from Street Fighter II. Given the simplicity of control schemes, these acts of ferocity conveyed&hellip;

Summary : Button-pounding brawlers often grow monotonous when campaigns are too long. Lapis x Labyrinth is the shining exemption to the rule. You’ll likely head into the eightieth quest with the same enthusiasm as the first one, making this a requisite experience for fans of frantic action.