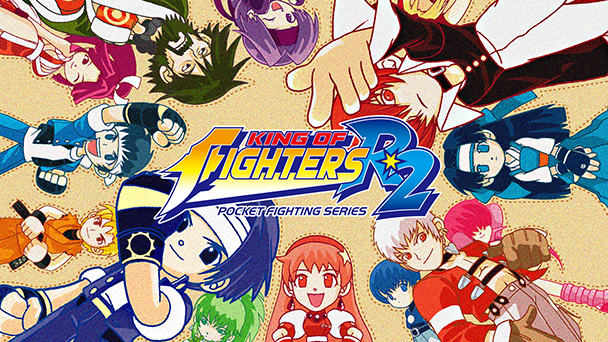 As the SNK 40th Anniversary Collection demonstrated, the company once known as Shin Nihon Kikaku Corporation was an industry powerhouse. Beyond the two dozen arcade and console adaptations found on the anthology, SNK would later create the Neo-Geo MVS and AES, a modular arcade system and its home counterpart. Each played famed franchises like Metal Slug, King of Fighters, and Samurai Shodown. But at $650 for the system and about $200 for each game, the Neo Geo was prohibitively expensive.

SNK’s solution was Neo Geo Pocket Color, a handheld system that might not have lacked the power of its costlier brethren. However, the affordable portable delivered 31 competent arcade adaptations (80 in Japan), as well as a battery life that often reached 40 hours. Sadly, the system’s glory days were short lived. Less than a year after release, the Neo Geo Pocket Color was discontinued, leaving behind a remarkable legacy. 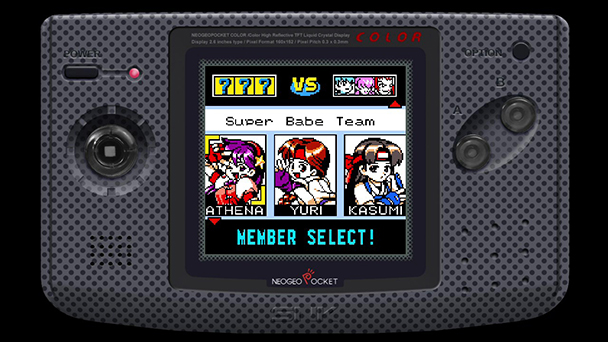 Fortunately, 37Games’ buyout of SNK Corporation has resulted in the re-release of some of the titles, with the Switch port of SNK Gal Fighters arriving three months ago. More recently, gamers are privy to a pair of portable fighters, with King of Fighters R-2 and Samurai Shodown! 2 arriving on Nintendo’s hybrid hardware.

Before the release of the PSP in 2005, portable fighting games were routinely lackluster. Screens didn’t offer the fidelity for high-resolution sprites, and systems didn’t have enough internal memory for the vast amount of animations routinely exhibited by the genre. But the 1999 release of King of Fighters R-2 strove to overcome these limitations. Twenty years later, it’s not going to dethrone a modern title like BlazBlue Centralfiction Special Edition. But for less than eight dollars, this title still holds plenty of charm. 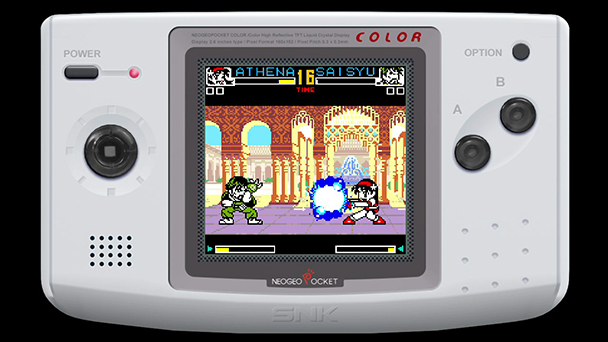 Boasting fourteen playables at the start, as well as eleven Classic and Orochi unlockables, King of Fighters R-2 has a respectively sized roster. Although the 160×152 resolution of the Neo Geo Pocket Color doesn’t provide for much fidelity, SNK squeezed is as much personality as they could, opting for chibi-fied representations of favorites like Mai Shiranui, Terry Bogard, and Yuri Sakazaki. If you’re a fighting fan, there’s all immediately recognizable, despite the three-color limit for each combatant.

But look past the visuals, and R-2 feels like a realized fighting game. Jumps quickly clear a significant amount of real estate, shirking the perpetual tangle of sprites of many Game Boy Advance fighters. Attacks, initiated with either a tap or longer button press, habitually extend appendances in an exaggerated manner. Comical to observe, the system ensures that bouts feel lively and that characters are responsive. 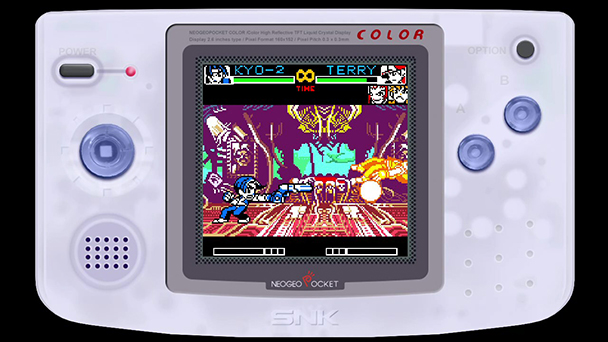 Pleasingly, the pugilism comes with a multitude of options. Opt to challenge a succession of opponents in the single-player game and you can either select a single fighter or opt for teams. Although the latter option doesn’t provide the tag-team action of some fighters, win a one-on-one match and your character will receive a health bonus. Plus, there’s variety to matches when selecting squads like Team Fatal Fury (Terry, Ryo, and Mai) or Team Kusanagi (Kyo, Saisyu, and Shingo). Another selection is the found in the two different play modes. Extra Mode allows charactesr to manually charge their power meter. Once it’s reaches its capacity, you’ll enter MAX Power Mode and are able to execute Super Special Moves and throws. Alternatively, Advanced Power adds to your gauge with every strike but you’re able to dictate when you’ll enter Power Mode and dish out immense amount of damage.

Making Mode extends the ability to create a customized fighter. Here, you’ll have to win despite certain conditions like a strict time limit or without the ability to block. Emerge victorious and you’ll earn equippable items that grant abilities like immunity from normal attacks or throws. Persevere, and these items will even grow in strength, adding a light role-playing aspect to the fighter. Fundamentally, Code Mystics porting is impressive, with options to adjust screen size, apply an option filter, and read the original game manual. The original game let you trade data with the Dreamcast version of King of Fighters Dream Match 1999; that’s expectedly disabled. 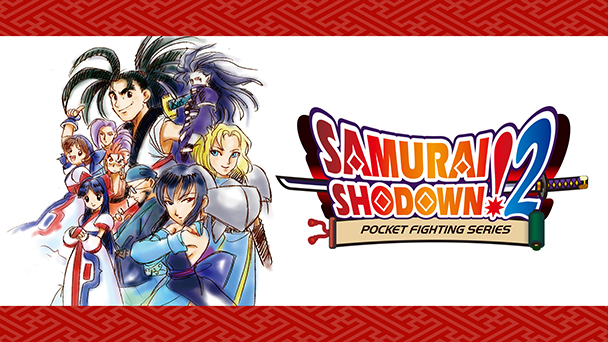 A bit too frequently, video game marketers draw the ire of players. Such was the case with the release of the Switch reboot of Samurai Shodown. The first batch of physical copies included a download code for the Neo Geo Pocket Color version of Samurai Shodown! 2 Pocket Fighting Series. Instead of stating that the game would eventually be made available to everyone, SNK remained tight-lipped, and some retro-loving players felt like they were being coerced into a purchase.

Fortunately, the cherished standalone portable fighter is now available without the burden of a costly purchase. Much like King of Fighters R-2, time has been quite kind to Samurai Shodown!. If you look past the chibified visuals, you’ll find a weapon-based fighter that captures the methodical pacing and injurious attacks that have helped define the SNK series. 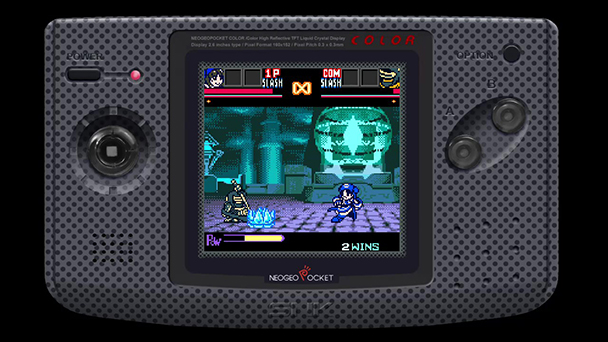 The game’s design was heavily influenced by Samurai Shodown 64: Warriors Rage, a title designed for the MVS’ successor, the Hyper Neogeo 64. Save for the absence of Hanma Yagyu, the entire cast makes a reappearance and even adds favorites Charlotte Christine de Colde and Jubei Yagyu. As such, expect the same plotline through the single-player campaign, with the reincarnation of Yuga the Destroyer serving as an impetus for the skirmishing.

Naturally, move sets had to be pared down for the two-button portable. Like King of Fighters R-2, you’ll tap a button for a weak attack, while a long press issues a strong strike. But smartly SamSho! 2 retains the feigns of it the series, with most characters simulating an attack with a press of the ‘B’ button. Expectedly, there are exceptions, and you’ll find a few characters able to summon some potent kicks via a quick tap. Intriguingly, you’ll have access to two sets of special moves, depending on whether you want to play as a chivalrous or treacherous swordfighter. 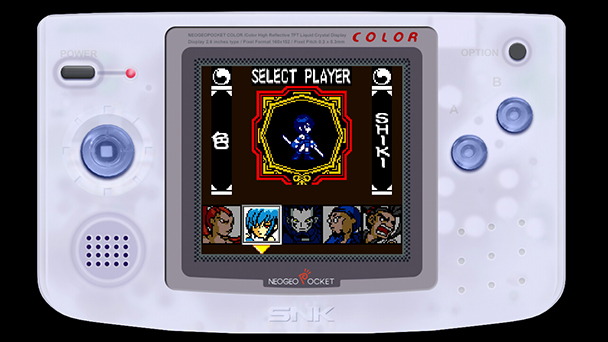 SNK added enticement through collectable cards. Meet certain in-game requirements, like defeating a boss, and you’ll receive one of the dividends. These can be viewed from the menu system but more importantly, they can be equipped, augmenting the abilities of your combatant. The original game has a mode where players would swap cards with each other, and since it’s not greyed out, I’ll assume that Switch players are able to do the same once this pandemic ends.

The sole element that wasn’t adeptly downsized was the game’s soundtrack. The original Neo Geo Pocket Color could pump out some plucky chiptunes but didn’t have the hardware to emulate the soft serenity of a shakuhachi. As such most of the beauty of the original soundtrack, which included traditional instrumentation is missing. Visually, the game succeeds with a surprising amount of animation, and only the occasional flickering shadow.

King of Fighters R-2 and Samurai Shodown! 2 were
played on Switch with review code provided by the publisher.