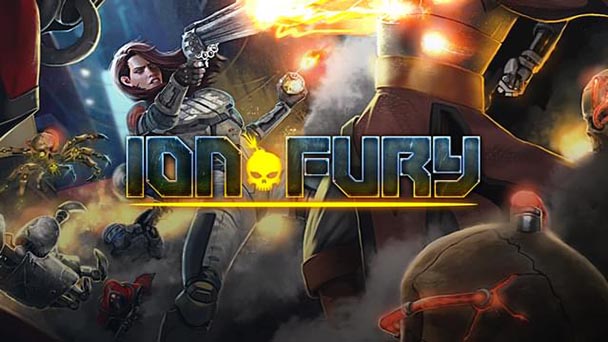 In hindsight, the first-person shooter has undergone a curious evolution. Early efforts like Wolfenstein 3D, Doom, and Duke Nukem 3D were exceedingly taut experiences, teeming with enemies waiting around corners, each ready to kill careless players. Over the years, the genre’s advances made things easier. Commonplace perks like regenerating health, navigational aids, and aim-assistance might seem helpful but they’re collective integration has gradually diluted the intensity of the FPS.

Thankfully, Ion Fury is here to remind us of the unflinching difficulty of yesteryear. The game is successful in those pursuits because it doesn’t just pay homage classic shooters. Instead, the game is running on a version of Ken Silverman’s Build engine, the very same toolset used to craft Duke Nukem 3D, Blood, and Shadow Warrior. Within minutes of booting up Ion Fury, the incorporation of the Build Engine is obvious. From the garish, delightfully low-resolution texturing used to generate sordid environments to the jittery movement speed of the main character, Ion Fury feels like it was just recovered from a ‘90s time capsule, alongside a Fugees CD. 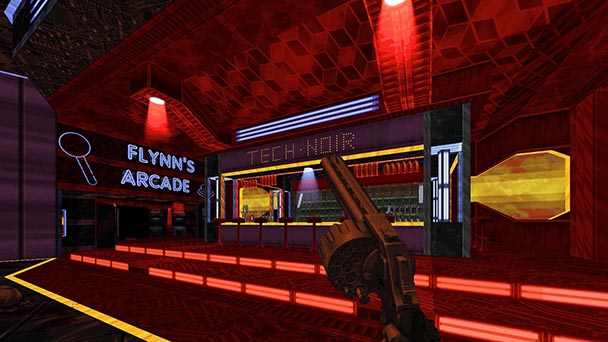 Learning to Love the Quick Save Key

Sure, the resolution scales up, you can toggle v-sync, and there’s even controller support. But you’ll want to resist the temptation for console-style play. Ion Fury makes Call of Duty and Battlefield feel like they’re build for the reflex speeds of grandparents. You’ll need the ability to mouse over a foe in a fraction of a second, especially when bosses release hordes of subordinates to harass you.

But if you’re open to using the WASD navigation, Ion Fury keeps it fast and fluid, with only a split-second pause to load new zones. If you’ve played titles like Duke Nukem 3D expect to fall right back into that timeless FPS groove. From sliding up ladders at breakneck speeds to collecting a succession of armor-augmenting shards, Ion exudes familiarity. Perhaps the only adjustment is rooted in your sprite-based adversaries. Unlike today’s opponents, they often stand perfectly still, making them seem less threatening. 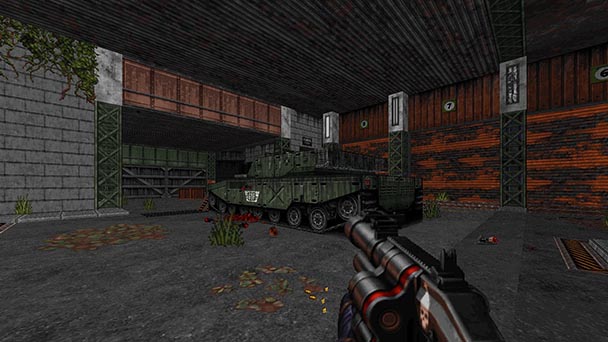 One thing that is more menacing is moving through the game’s spacious levels. Here, Ion Fury stays with convention, as protagonist Shelly “Bombshell” Harrison tour of Neo D.C. includes the kind of dingy subways, shopping malls, and bathrooms that filled classic FPSs and countless WADs. In keeping with tradition, find your way through it can be challenging. While ammo and armor pickups signal new areas, maps are quite vast. There’s plenty of gatekeeping via color-coded key cards that seem to always be found in alcoves. That said, getting lost isn’t always a bad thing. Ion Fury’s environments are packed with alcoves, secret passages, and areas that will test your first-person platforming skills. But know that you’ll probably be doing a bit of backtracking across the game’s fifteen-hour duration.

As with any respectable first-person shooter, there’s a decent variety of enemies and weaponry. While the former don’t demonstrate variety until a few hours in, even the game’s basic cult members are dangerous. Stop moving and they’ll snipe you from remote distances. Naturally, Ion Fury requires you to prioritize targets, with opponents like speedy spider-bots who sprint toward you on sight. Bosses elevate the level of challenge exponentially, with hulking mechs dispensing a ceaseless repertoire of deadly attacks. Play Ion Fury on one of the elevated challenge levels and you might be forced into using a cheat code. 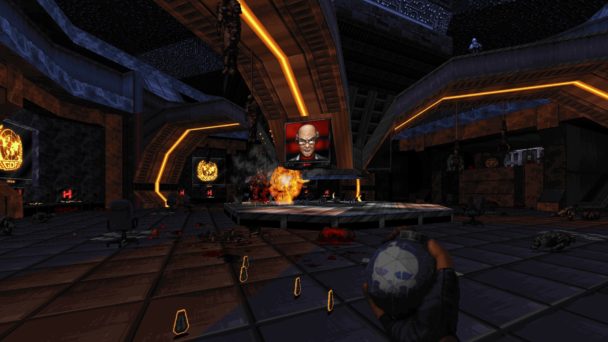 Wicked Weaponry and No Bubblegum

Fortunately, your arsenal might just be potent enough to take down Ion Fury’s transhumanist antagonist. A majority of weapons have dual firing modes and much of the enjoyment stems from learning when to harness these capabilities. While your basic revolver is great at plinking away at isolated enemies, rapidly hitting the hammer can quickly mow down a mob before they have a chance to react. Bowling bombs are another highlight, allowing you to roll spherical grenades that automatically home in on baddies. Unlike the first-person shooters of old, precision is valued. Hit a robotic centipede anywhere but on the head and you’ll split the creature into multiple foes.

Across the last few decades, the first-person shooter has evolved into something quite different, with auto-regenerating heath, tech trees, and a shift away from engaging single-player campaigns. Ion Fury serves as a rebellious reminder of the genre’s sinewy early era. The title is a deliberately tough trek, planting peril around corners and potentially will make you think of the homogeneity that has hurt shooters. 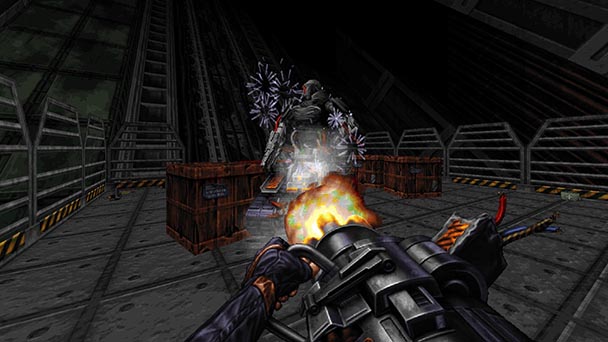 Ion Fury review
In hindsight, the first-person shooter has undergone a curious evolution. Early efforts like Wolfenstein 3D, Doom, and Duke Nukem 3D were exceedingly taut experiences, teeming with enemies waiting around corners, each ready to kill careless players. Over the years, the genre&rsquo;s advances made things easier. Commonplace perks like regenerating health, navigational aids, and aim-assistance might seem helpful but they&rsquo;re collective integration has gradually diluted the intensity of the FPS. Thankfully, Ion Fury is here to remind us of the unflinching difficulty of yesteryear. The game is successful in those pursuits because it doesn&rsquo;t just pay homage classic shooters. Instead, the&hellip;

Summary : Ion Fury is a throwback to a time before battle royale and competitive multiplayer became the focus for first-person shooters. It’s a tribute to a time when the genre provided you little more than a powerful arsenal to take down an army of goons.