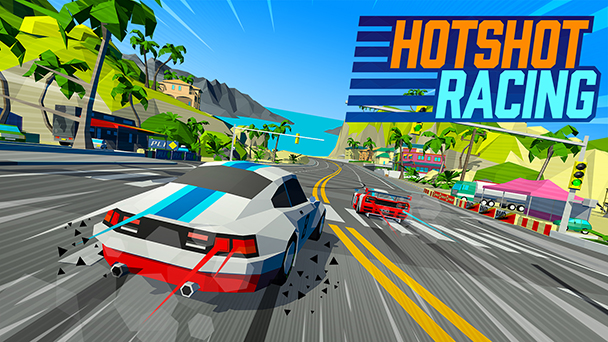 Filled with blissful drifts, eternally blue skies, and polygons as sharp as razors, Hotshot Racing is a salient throwback to simpler times. Retro racers, make your way to the starting line. 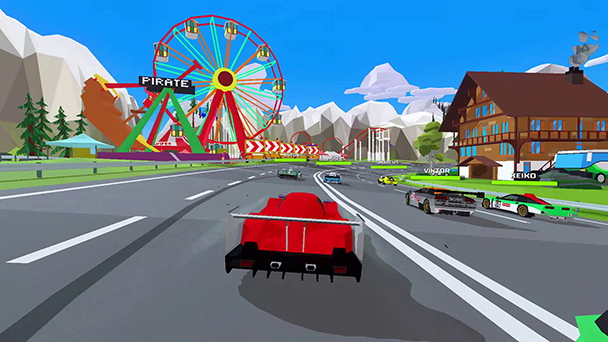 Players under the age of thirty are poised to have a good time with Hotshot Racing. Lucky Mountain Games and Sumo Digital’s game is a thoroughly polished arcade racer that doesn’t demand the skillset of most modern simulations. Running at an unswerving sixty frames-per-second, the titles offers a multitude of tracks, characters, and modes. There’s even splitscreen play for up to four rivals, providing plenty of competitive prospects.

But gamers with at least a hint of crow’s feet are the ones who’ll be head over heels with the recent Switch, PlayStation 4, Xbox One, and PC release. Hotshot’s low-poly cars and courses largely eschew texturing, evoking the visual style of classics like Daytona USA and Virtua Racing. Peer a bit deeper and you’ll find a multitude of cheeky references to yesteryear’s titles. From a Ferris wheel on the side of the track to a whale leaping through the air, Hotshot Racing feels like a SEGA title from the last millennium. Yes, those impossibly azure skies are back as well as an announcer who sounds hopped up on energy drinks. 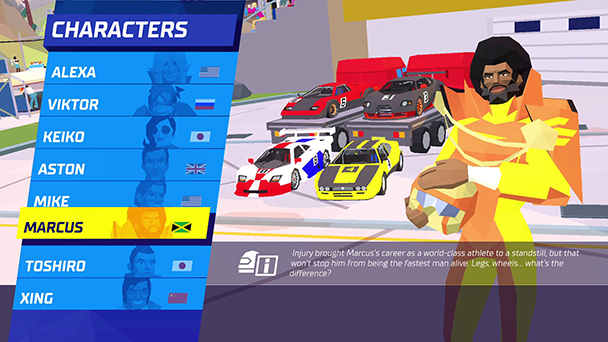 Undoubtedly, racing veterans will appreciate the game’s handling. Tap the brakes, and your vehicle will break traction, allowing for a textbook drifts through turns. Fortunately, it’s just as easy to recover traction, so you’ll never be frustrated by the kind of constant fishtailing that occurred when you played Ridge Racer for the first time. Both drifting and drafting feed into your boost meter, supplying Burnout-like opportunities to jet past your rivals on a straightaway.

Sumo’s experience with Sonic & Sega All-Stars Racing is evident here, especially with AI that’s a bit brighter than most games. Although there’s unquestionable evidence of rubber-banding, challengers aren’t passive drones that follow scripted routes. Give them an opportunity and they’ll nudge your bumper, with the collision potentially sending you into a wall. Unfortunately, it’s bumping isn’t reciprocal, so you won’t have the satisfaction of sending your fellow contenders off the track. That said, there’s more jockeying and jostling for position that in most arcade-influenced racers. 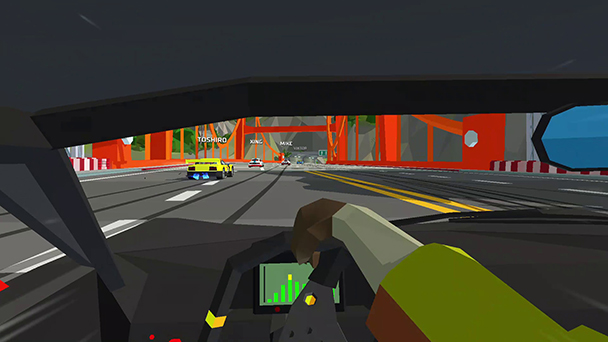 Take on Hotshot’s quartet of Gran Prix championships and you’ll vie for a first-place finish across sixteen tracks and their mirrored counterparts. Wisely, the game doesn’t emphasize precision, extending throughways that are can accommodate three or four drivers alongside each other. For those seeking a consummate challenge, Hotshot delivers on its escalated difficulties. Here, a late-race shunt from a competitor can wreck any hopes for catching up, ratcheting up the level of tension.

Although the campaign won’t take long to compete, Hotshot complements its heats with a pair of modes that adds a bit of variety. “Cops & Robbers” plays like an infection-style game, which bumping into criminals converts them to additional police vehicles. “Drive or Explode” plays out like an interactive version of Speed, requiring players to maintain their miles-per-hour, or they incur damage until they explode into scrap. Often, multiplayer variations offer short-term enjoyment, but Hotshot Racing’s execution adds a bit of longevity. Despite pressing deadlines, I found heated, eight-player competitions difficult to quit on at least two occasions. 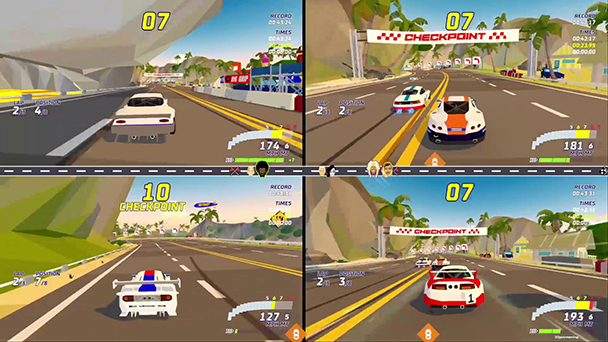 While listeners might hope for a soundtrack with melodies that rival “Magical Sound Shower” or ‘Let’s Go Away”, Hotshot’s refrains aren’t quite as memorable. Racing is accompanied by high-energy synth-driven score. But songs are a bit homogeneous, with many riffing on a simple theme. Visually, the game is more adept, with a framerate that held study even as four split-screen players simultaneously went slideways. Seemingly, nothing can break the game’s fluidity, at least on PC.

Drawing on an inventory of influences, Hotshot Racing could have easily ended up as halfhearted homage. But the developers seem too savvy for that, drawing on each franchise’s strengths and blending them together into commendable intermingling. Although the end result won’t topple Ridge Racer, Virtua Racing, Daytona USA, or even SCUD Race, it’s good enough for contrast with thee classics. 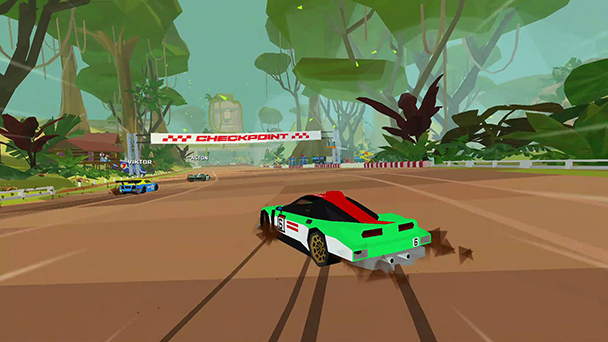 Hotshot Racing was played on PC with review code provided by the publisher.

Hotshot Racing review
Filled with blissful drifts, eternally blue skies, and polygons as sharp as razors, Hotshot Racing is a salient throwback to simpler times. Retro racers, make your way to the starting line. Players under the age of thirty are poised to have a good time with Hotshot Racing. Lucky Mountain Games and Sumo Digital&rsquo;s game&hellip;

Summary : Blazingly fast, player friendly racers are becoming increasingly rare, with a field dominated by light simulations. But Hotshot Racing is a reminder that this used to be one of the fundamental genres of racing. Those seeking a new dose of white-knuckle sprinting might be smitten with the game.