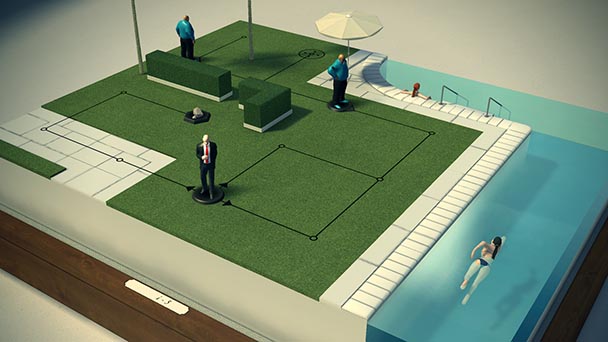 What is the concept? Anyone who ever played the PS Vita versions of Mortal Kombat, Borderlands, or the Jak and Daxter Collection knows, ports of console games aren’t always up to par. Even if developers are clever enough to shrink processing requirements down to portable form, there are often debilitating sacrifices that players have to put up with, whether it’s a reduction of graphical fidelity or framerates that sputter along. So instead of trying to adapt Hitman’s CPU-intensive, sandbox-oriented gameplay, developer Square Enix Montréal followed a less intuitive route, mirroring the furtive trajectory of the franchise’s follicle-free lead. In execution, Hitman Go envisages Agent 47’s stealthy skulking and assassinations as a virtual board game. With each stage rendered in puzzle form, players move the protagonist around interconnected routes, overtaking enemies, and ultimately landing on a node to complete their murderous assignment. A bit ironically, this simplified adaption has also made its way back to a now-gen console.

In other the Vita and PlayStation 4 iteration, 47 faces an abundance of antagonism by guards that move along predictable paths. Move into an unsuspecting sentry and they’re removed from play- cast off to the side of the board like a reckless chess players’ forsaken queen. But with both Agent 47 and adversaries moving on each turn, players have to be careful not to be caught by roving foes who foretell their next move with the direction they’re facing. As the level of difficulty increases, players have access to a number of diversions, from objects that can be thrown to divert guards, brush were 47 can hide, and even weapon that can eliminate enemies from a distance. 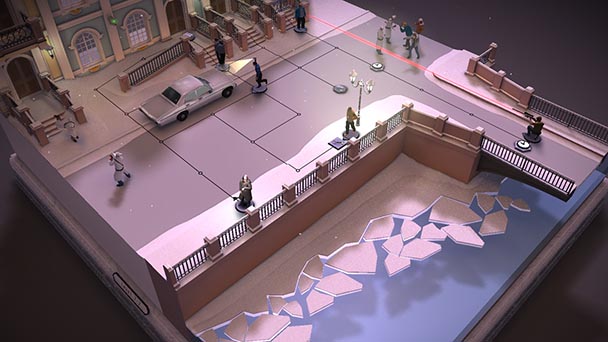 What are the game’s strengths? Hitman Go: Definitive Edition retains the touch control of the mobile version, allowing players to direct 47 via the DualShock 4’s touchpad or the Vita’s touchscreen. Of course, for players who’d dislike swiping, both versions allow for analog stick control. Either way, the game’s control system is intuitive enough that Hitman Go is able to forgo a traditional text-based tutorial, revealing new gameplay elements as players make their way through each successive stage. This approach also helps to shape the title’s gradual learning curve, ensuring players won’t reach a standstill amidst the seven chapter campaign.

Like many game with mobile origins, stages encourage replay from players, with semi-optional assignments that include tasks like not killing anyone or picking up a briefcase scattered on the playfield. While skipping these tasks won’t impede immediate progress, these commissions ultimately open up some of the game’s most gratifying levels. Save for the sporadic tenancy for shifting in place to wait for guards, Hitman Go‘s puzzles feel satisfying and rarely frustrate. Much of this success stems from the game’s clever design which limits the range of actions. As such, even the toughest conundrums becomes tests where methodical trial and error will eventually result in solution. 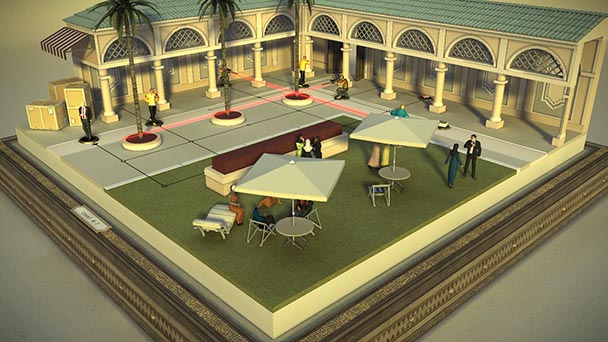 What are the game’s weaknesses: As first, Hitman Go’s downsized aspirations might cause dissonance for diehard franchise fans. Aesthetically, the experience might seem as aloof as the game’s lead assassin. Everything from character animation, voice work, to the franchise’s signature open-ended gameplay have been pared away, trimming Hitman down to the most essential elements. But the adaptation isn’t without loss. Some of the series’ greatest thrills, from the tension of blending in when wearing an appropriated costume or the escalating anxiety as you wait for the perfect moment to kill your mark were unable to be adapted.

Fortunately, it’s partially offset by a visual delivery that’s as clean as Agent 47’s perpetually wrinkle free suit and gleaming pate. Each level renders a deliberately detailed diorama for players built around familiar franchise locales. In its recreation of a board game, large empty expanses on the periphery are juxtaposed against meticulously rendered villas and minimalist airports. While there’s a lack of character animation, Hitman Go is hardly lifeless. Pieces move as if they have tangible weight, while Ave Maria plays to underscore centerpiece assassinations. While level rendering shouldn’t be too difficult, especially for the PlayStation 4, near-requisite mission resets are accompanied by loading times. 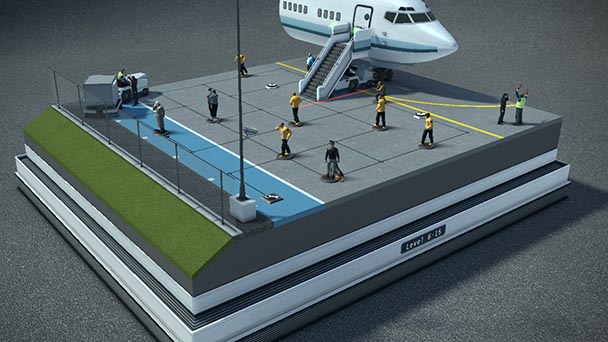 Is it worth the money? Hitman Go: Definitive Edition’s 91 levels should keep aspiring assassins engaged for about six hours. Considering the game’s $7.99 USD price, along with cross-buy and cross-save functionality between the Vita and PlayStation 4 iterations, the game extends a respectable price-to-play ratio. Agent 47’s latest offering might have swapped action for pensive antagonist, but puzzle enthusiasts will likely want to add the Definition Edition to their own digital dossier.

Hitman Go: Definitive Edition was played on the PS Vita and PlayStation 4 with review code provided by the publisher.

Hitman Go: Definitive Edition
Platform: PlayStation 4, PS Vita
Developer: Square Enix Montréal
Publisher: Square Enix
Release date: February 23rd, 2016
Price: $7.99 via PSN, Cross-buy across PS4/Vita platforms
Hitman Go: Definitive Edition review
What is the concept? Anyone who ever played the PS Vita versions of Mortal Kombat, Borderlands, or the Jak and Daxter Collection knows, ports of console games aren&rsquo;t always up to par. Even if developers are clever enough to shrink processing requirements down to portable form, there are often debilitating sacrifices that players have to put up with, whether it&rsquo;s a reduction of graphical fidelity or framerates that sputter along. So instead of trying to adapt Hitman&rsquo;s CPU-intensive, sandbox-oriented gameplay, developer Square Enix Montr&eacute;al followed a less intuitive route, mirroring the furtive trajectory of the franchise&rsquo;s follicle-free lead. In execution,&hellip;

Summary : Hitman Go: Definitive Edition is the bar-coded killer re-imagined in puzzle form and boiled down to the barest of essentials. While hardcore Agent 47 aficionados might miss the tension, the elimination of wanton violence could introduce the property to a new audience.