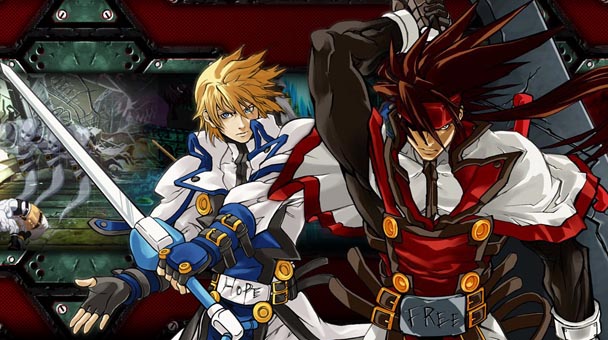 Eric’s Take: Being the fighting game addict that I am, one of my missions is to try as many franchises from the genre as possible. Back around 2005, that mission led me to cross paths with Arc System Works’ Guilty Gear series. It was on the original Xbox that I got my first taste of Daisuke Ishiwatari’s creation via the only release the series had on the system; Guilty Gear X2: #(Sharp)Reload. Sporting a large roster, diverse mode variety, and one of the hardest-rocking original soundtracks ever in a video game, there was a lot to like about #Reload. Now, Guilty Gear XX sees the light of day, once again, with Accent Core Plus. Is it fighting game Heaven or Hell?

Accent Core Plus is the fifth variation of Guilty Gear XX and an improved version of the standard Accent Core. Accent Core brought about a bunch of changes, from new character artwork to entirely re-recorded voice-overs. Two characters who were removed from Accent Core due to balancing issues, Kliff and Justice, make a return as unlockables in Plus and feature some alterations. They, however, still aren’t tournament legal and will not be playable in ranked or player matches online until the “R” patch/update releases. As with every fighting game revision, Accent Core Plus has gone through another wave of character balancing in the pursuit of perfection. Aside from the two previously-noted fighters, Arc System Works appears to have come close to that goal. 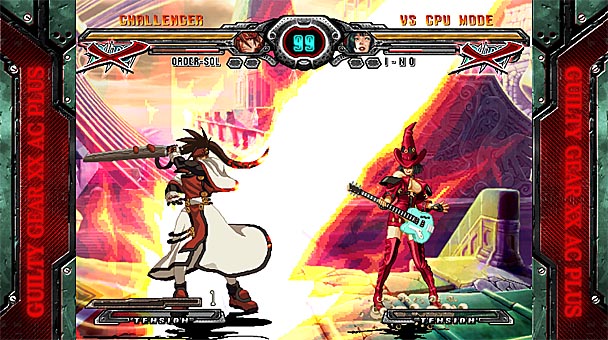 From a gameplay perspective, the Guilty Gear games play similarly to BlazBlue. This is no coincidence as BlazBlue is the spiritual successor to Guilty Gear. The combat is lightning-fast, busy and tactical. Even when characters are double jumping, dashing, or tossing the most unusual projectiles ever conceived, fights never feel entirely out-of-hand. Like BlazBlue, Guilty Gear uses a four-button setup, in this case consisting of punch, kick, slash and heavy slash. In addition to the traditional commands, pressing certain combinations of the four main buttons and a directional input can activate more techniques. A tension gauge acts as the standard super meter, allowing for special moves and “instant kills”. As the name implies, an instant kill will K.O. your opponent if it connects, regardless of how much health they have remaining. The tide of a fight can turn in a single heartbeat.

To the rare breed of players who frequent the solo options in fighting games, Accent Core Plus has enough offline modes to justify the price of admission without ever setting foot online. The mainstays of the genre are present and accounted for, including Arcade, Mission, Survival, Training, and player vs. player and player vs. CPU Versus modes. The Survival mode plays almost exactly like the later BlazBlue games’ Abyss mode, but without the shop at the beginning. Players take on an onslaught of characters with only one health bar. As fights progress, your character increases levels. After gaining twenty, you face off with a powered-up, “EX” version of a character from the roster. Winning that fight grants you the option to choose from a list of enhancements for your character. It’s an entertaining and addictive take on the tried-and-true Survival format. 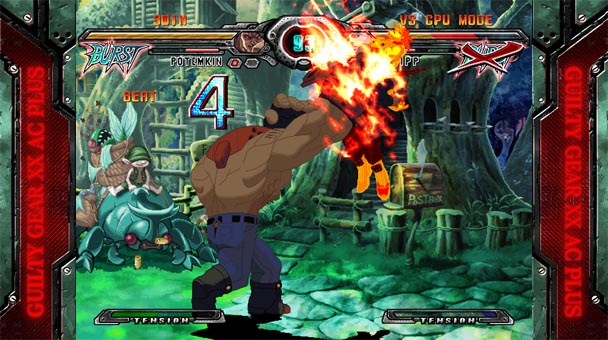 Most fighting game developers tend to call it a day with modes like those (if we’re lucky), but not Arc System Works. Guilty Gear XX: Accent Core Plus has even more to offer solo brawlers. Take, for example, the Story mode. Every fighter has some sort of visual novel-esque, text-driven adventure that has the characters crossing paths with each other, usually resulting in a fight. It’s also through this mode that Kliff and Judgement are unlocked. Not to be outdone by the Survival mode is Medal of Millionaire. In this mode, beating the stuffing out of your opponent and collecting dropped medals increases a gauge that boosts your score. Health items surface at certain scores, instead of after every win. But wait, there’s more! Accent Core Plus also has a three-on-three Team Versus mode. There’s no tagging, but it gets the job done. Lastly, I want to make quick mention of the Sound mode. In it, you can listen to the entire Daisuke Ishiwatari soundtrack as an album or put your favorite song on repeat. Guilty Gear’s riff-tastic heavy metal music has always been one of the franchise’s biggest strengths and that fact hasn’t changed. Don’t be surprised if you find yourself contemplating a purchase of the twenty-five dollar soundtrack album on iTunes.

If I am being perfectly honest, my love for BlazBlue has surpassed that for Guilty Gear. I also feel that BlazBlue is a more polished product in every aspect. Having said that, revisiting Guilty Gear for this review has given me a new appreciation for the series and its off-the-wall insanity. In general, Accent Core Plus clicked more with me than #Reload did. Players jumping into the franchise for the first time need to approach with the expectation that there’s a weirdness factor to get over. Once that phase has passed, it’s fighting game Heaven. 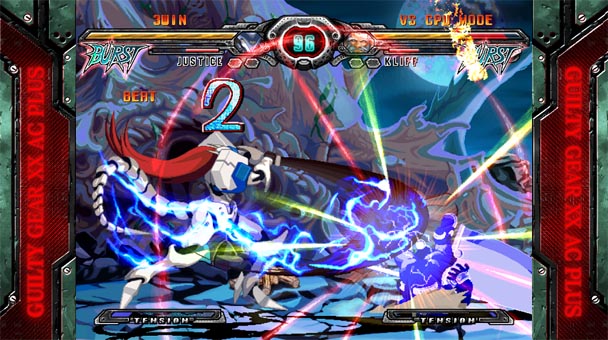 Robert’s Take: To understand my appreciation for Accent Core Plus, we need to travel back to the series’ inaugural entry. Whereas most PlayStation fighters of the age suffered from a restrained number of sprite animations and sluggish load times, 1998’s Guilty Gear was a technical marvel. Showcasing substantially-sized brawlers who moved with unrivaled fluidity, the title threatened to upset Capcom’s longstanding reign in the fighting genre.

While Guilty Gear’s aesthetics bested PSOne ports of Darkstalkers, Street Fighter Alpha 2 and X-Men vs. Street Fighter, what was most remarkable about Arc System Works’ unlikely upstart was the game’s level of technical proficiency. From an enlivening air-combo system, momentum shifting Chaos Attacks, and devastating Destroy Attacks, Guilty Gear possessed an unrivaled amount of depth. With a decade worth of additions, tweaks, balancing and polish, 2007’s Guilty Gear XX Accent Core Plus for the PlayStation 2 continued the franchise’s legacy, thrusting Sol Badguy and company into the next generation of console hardware. 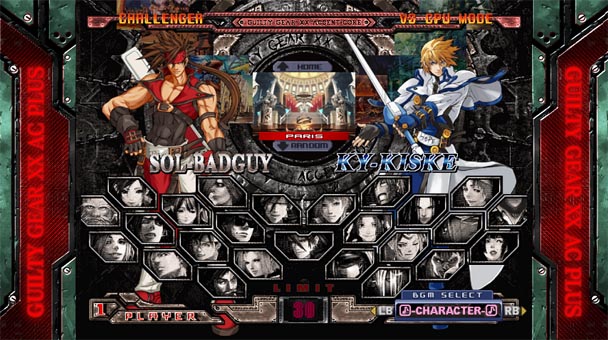 The release of Accent Core Plus for both the Xbox 360 and PlayStation 3 transports the PS2 title into the HD realm, offering a few amenities like a pseudo-HD makeover and online play. Regretfully, the port doesn’t quite match the proficiency of other recent revitalizations, serving as a holdover until Arc System builds a legitimate BlazBlue/Persona 4 Arena-quality production with their motley cast of characters.

That stated, Guilty Gear XX Accent Core Plus isn’t without its virtues. For fighting game fanatics, the title’s skirmishes still ranks among the genre’s best. Unapologetically technical, players can spend weeks learning the secreted nuances of character. With a strict (but fair) input system and a complex array of Beats, Gatling Combos, Special as well as Jump Cancels- and even character weight factoring into each fisticuff, Guilty Gear shrouds a boundless amount of depth. Yet amazingly, the title’s mechanics are never so archaic that players can’t jump in and learn a few combos via the game’s encyclopedic tutorial system.  More importantly, the title’s roster is incredibly diverse, both in character design and play style. Those accustomed to palette-swapped ninja and congruent Ryu and Ken dyads with be pleased to know that each of Guilty Gear’s twenty-five characters bring a distinctive form to the festivities. 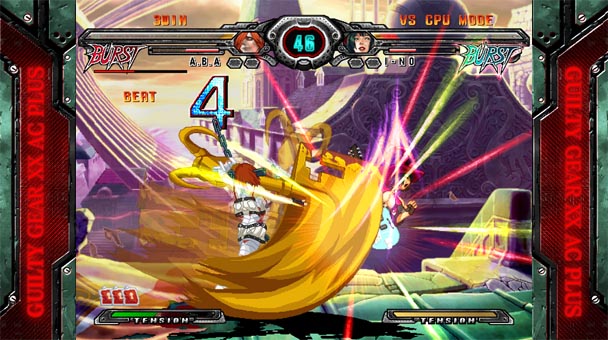 While pitting dissimilar but balanced fighters against each other drives the game’s robust, branching storyline and invigorates local matches, Accent Core Plus’ net-code can’t quite accommodate online competitions. Jumping into the game’s basic ranked and unranked options demonstrations woes such as button lag, graphical slowdown and even intermittent disconnects. For a game that demands such unflinching precision, it’s regretful that Guilty Gear online component is soiled. Apparently, this setback has also affected the game’s community; although released a few months ago, only a few contenders can be found across PSN.

Visually, Accent Core Plus sharpens its sprites, demonstrating a slight improvement over the original PS2/Wii iteration. Disappointedly, nothing was done to transition the game into a widescreen delivery, with letterboxes framing the action. As my colleague Eric noted, Ishiwatari-san’s rocking score still fuels the fighting, provides blistering riffs that harmonize with the frantic on-screen action. Sadly, the game’s voice work wasn’t given any enhancement and sound rather hushed and flat in the overall sound mix. 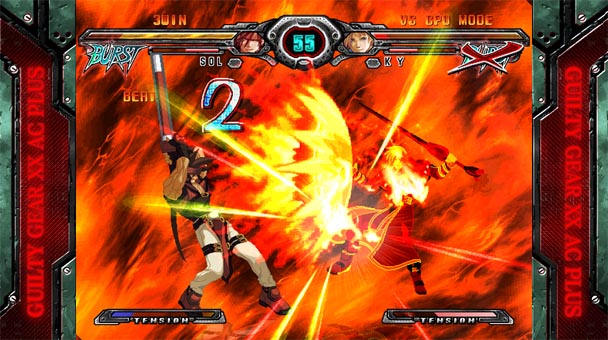 If potential purchasers can look past Guilty Gear XX Accent Core Plus’ lackluster online component, they’ll find a capable port of the PS2 and Wii game. While it would have been pleasing to see Plus R’s changes and augmented movesets, at $14.99 USD, a purchase of Accent Core Plus provides a cavernous amount of content able to keep genre enthusiasts glued to the fight sticks for a very long time.

Previous: New Releases for the Week of March 20th-26th, 2013
Next: The Sims 3: University Life Expansion Review