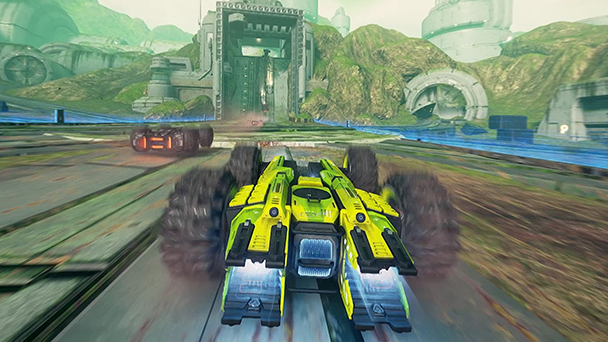 Popular racing franchises like Gran Turismo, Forza Motorsport, Need for Speed, and Dirt all put players in the driver’s seat of petrol-swigging cars. But the genre wasn’t always so unadventurous. During the late Nineties, you could find a multitude of competitions where you controlled wildly futuristic vehicles. Series such as F-Zero, Wipeout, Jet Moto, and Extreme-G, cranked up the speed, contorted the tracks, and often mounted weaponry onto craft to fortify the level of tension.

These techniques also came together exceptionally well for Attention to Detail’s Rollcage, a 1999 PlayStation One title which spurred a sequel the following year. Eschewing the horizontal tracks of its peers, Rollcage permitted players to dash across the sides of tunnels and even speed across ceilings. A breakneck amount of velocity and a dubious amount of downforce meant that your vehicle hugged almost any surface. And like those low-slung, remote control cars with massive tires, the game’s vessels could flip over in the air, landing safety on their back without any losing momentum. Crashes could be disastrous and ruin a large lead over rivals. But the ability to shave seconds by finding the shortest racing line across a track filled with corkscrews overcome the fleeting feeling of defeat. 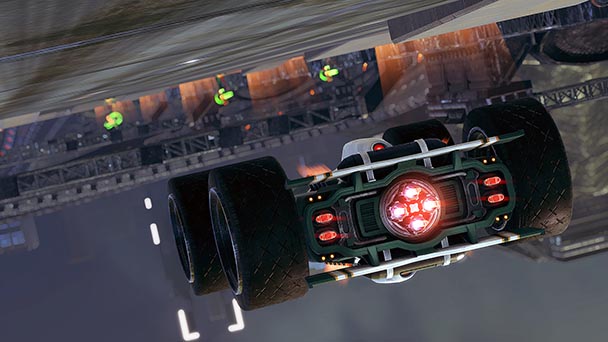 The recent release of Grip: Combat Racing rekindles those sentiments. Sure, there are moments where a bad decision will send you careening right off the track. But the sensation of hitting a succession of boosts to rocket past a foe for a first-place finish will mostly likely be your takeaway from a session with Grip. While some games seem to languish in Steam’s Early Access program, developer Caged Element seems to have used the two-and-a-half-year span prudently, heeding their audience and sculpting the title into a near-indispensable racing experience.

Like any respectable racer, there’s several small nuances that need to be mastered before you claim a first-place finish on any of the game’s sixteen tracks. Fortunately, an interactive tutorial offers aid the first time you play the title, imparting most of the essentials. Here, on a Daytona-style, multi-tiered oval, you’ll discover that laying off the accelerator when your soaring through the air can help roll your craft as well as how a few of the game’s weapons work. Pleasingly, the game even slows down time for each mini-lesson, permitting players to absorb the basics without being overwhelmed. 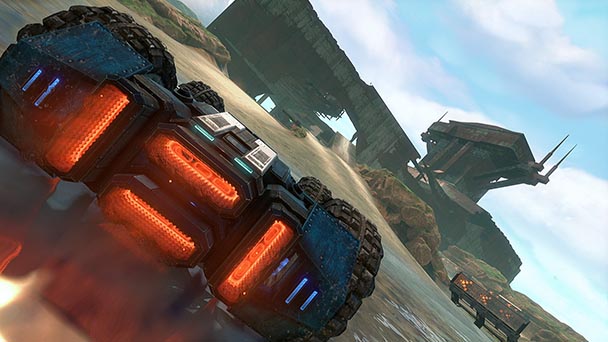 And after selecting a color scheme for your inaugural racing machine, you be directed toward a multitude of different modes. Beyond an eleven-challenge campaign, Grip extends four different types of standalone races, a deathmatch arena, and even Carkour mode where maintain moment as you speed across floating sections of track. Given the current tendency to provide the fundamentals and charge for additional content, it’s comforting to witness a developer bundle a multitude of play modes. Hopefully, the developer can deliver on their plans to release additional content for free.

Much like Rollcage, Grip’s competitions are no pushovers. With a multitude of racing and weapon-based skills to master and with little room for error, challenge is high. Although on-track obstacles and tight turns are typically color-coded for visibility, the blistering rate of speed can make evasion difficult. Here, course memorization pays dividends. After tackling the same circuit numerous times, you’ll learn what areas of the track are dangerous and which are perfect for triggering a boost. Pleasingly, many of the game’s weapons don’t take the ‘fire and forget’ approach of most futuristic racers. Missiles, for instance, need to be locked onto a target, which can create just enough distraction to get caught up on a barrier and spun around. 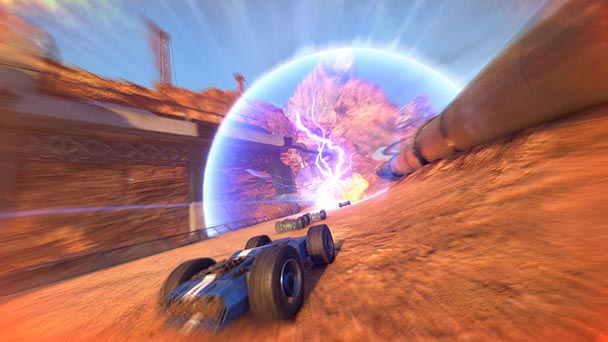 But unlike some racers where the mechanics or physics are might seem unfair, Grip’s sprints are largely spot on. Sure, you’ll occasionally get shunted into a barricade, but there’s at least the impression that you can catch up to the competition. And occasionally those moments where you underestimate your speed and shoot over the lip of a track respawn you quickly enough to not cause frustration. And if rubber-banding is present in campaign (it’s an option in multiplayer) game, Caged Element had proficiently concealed it. Grip’s AI is another winning attribute. Your rivals seem to be aware of your existence and offer up just enough weaponry and nudging to mistake for actual humans.

But when you are craving interactions with actual people, the game supports races with for up to ten competitors. Games with the rosters mostly full (bot can fill in any empty spots) resembled local matches, with efficient matchmaking and racers that were free of any lag. While Grip’s deathmatches lacked the outrageous weaponry and vehicles of Twisted Metal, the actual skirmishes felt similar. Here, you’ll play cat-and-mouse with opponents, chasing them after picking up a weapon, and evading them as you seek a new armament. 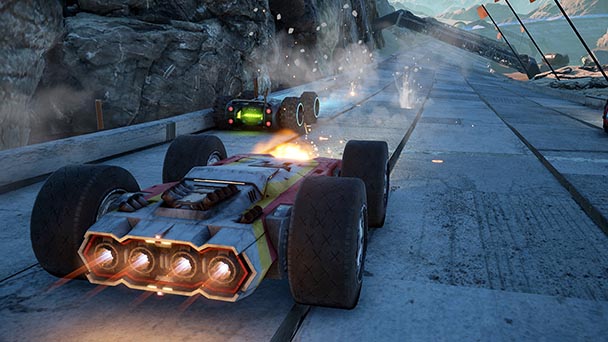 While Carkour is no dud, it could probably use a few minor tweaks. Like Gripshift and the TrackMania series, the object is to race across madcap structures and reach a finish line. Unsurprisingly, success typically entails maintaining a sense of momentum across the course, as an ever-increasing number of jumps stand between you and the stage exit. But whereas those aforementioned games eased players into the more difficult stages, here the challenge is at the start, where a near-perfect launch and precise control is needed to avoid a wipeout. Ideally, a level editor would be included, allowing gamers to create tracks to their liking and skill level.

Built on the Unreal Engine 4, Grip is a visual prodigy. The graphical design shirks the conventional hyper-clean aesthetic of most futuristic games, opting for a filter than adds a bit of grit to the proceedings. Fundamentally, this matches the look of the cars, which have enormous knobby tires and exhausts that resemble oversized furnaces. Although you can customize color and make cosmetic changes, don’t expect a lot of range of tweaking in the game’s garage. Favoring general equality over weighted stats, there aren’t any significant modifications you can do to your vehicle, which might have tampered the challenge level. Sonically, the game isn’t quite as adept, with startlingly low-key drum-and-bass and electronic tracks to drive the action. Mercifully, the PC version lets you import your own set list. 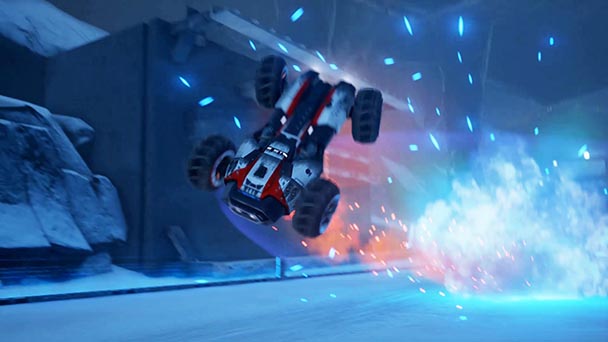 When the industry finds inspiration in classic nineties-era games, that results can be mixed. For every fruitful update, like id’s remake of Doom, there’s at least a lackluster few cash-ins like Golden Axe: Beast Rider or Bomberman Act: Zero. As a spiritual success to 1999’s Rollcage, Grip: Combat Racing reinvigorates the pulse-pounding mix of tempestuous speed, awesome weaponry, and entangled tracks that support racing on multiple surfaces. This is homage done correctly.

Grip: Combat Racing review
Popular racing franchises like Gran Turismo, Forza Motorsport, Need for Speed, and Dirt all put players in the driver&rsquo;s seat of petrol-swigging cars. But the genre wasn&rsquo;t always so unadventurous. During the late Nineties, you could find a multitude of competitions where you controlled wildly futuristic vehicles. Series such as F-Zero, Wipeout, Jet Moto, and Extreme-G, cranked up the speed, contorted the tracks, and often mounted weaponry onto craft to fortify the level of tension. These techniques also came together exceptionally well for Attention to Detail&rsquo;s Rollcage, a 1999 PlayStation One title which spurred a sequel the following year. Eschewing&hellip;

Summary : A prolonged stint in the Early Access program has made Grip: Combat Racing an engrossing, full-throttle experience. Not only is there a healthy amount of content, but there’s also an ample amount of polish that’s been applied to the experience.