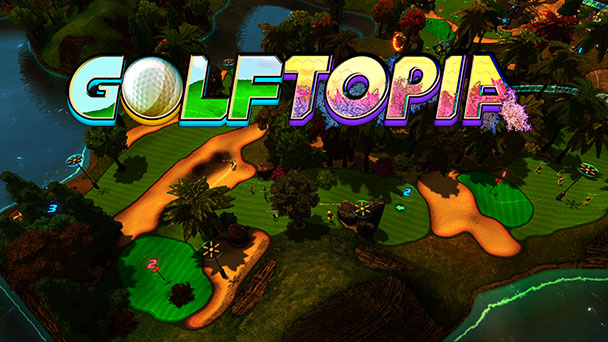 First-rate simulations require little understanding of their source material. Take 1989’s SimCity, which tasked players with zoning residential, industrial, and commercial districts, as well as building streets, parks, and public service buildings. Even if you had never pondered about public planning, the game imparted its own lessons. Chances are you’d take this information and have a greater appreciation for the design decisions that went into the creation of real urban spaces.

Likewise, MinMax Games’ Early Access release of GolfTopia requires little knowledge of the actual sport. Even, if you’ve never set foot on a miniature golf course, the title will impart a few things about golf. But surprisingly, you learn some of the essentials of marketing, such as the importance of listening to your audience. 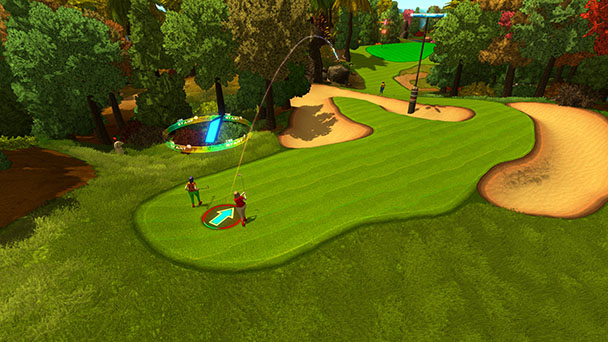 A Hole in One (Minute)

Hop into the half-gigabyte download and you’ll probably want to head into GolfTopia’s tutorial. Navigation around the sprawling environment and shifting the camera’s perspective are intuitive, using the mouse-and-keyboard fundamentals of almost any real-time strategy game. First, you’ll position a clubhouse which is the point of entry for the game’s AI golfers. Next, you’ll learn how to create your own hole, which is exceedingly straightforward, given the shrewd arrangement of the menu system. Simply open the Golf Structures submenu, plunk down a tee and a hole on the map, and you’ll be able to open your first course to the public. Pleasingly, as you are determining a spot your green, GolfTopia conveys information such as how far the distance of the hole is, along with a projected par.

Design like I did and you’ll create some boring courses that evade the natural obstacles that dot the landscape. But GolfTopia’s virtual golfers will let you know exactly how they feel as they automatically play the hole. If it’s an easy par three, some might feel convey content. But others, especially over the time, might remark on the austerity of your design. There’s a range of responses, so you can’t just listen to a single golfer. Instead, you must broaden your data pool. 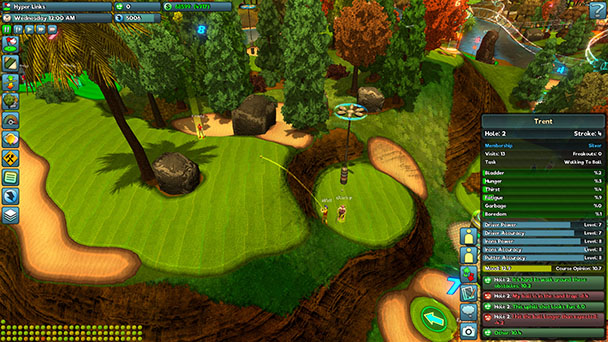 Analysis can be accomplished in several different ways. You can click on, and subsequently follow a single golfer, eavesdropping on every opinion with their fellow golfers. Or you can click on the hole itself, reading aggregate data on challenge level, lighting, the amount of nearby decoration, and distinction. Yes, it’s like the virtual golfers fill out a quantitative survey after every hole, which might make GolfTopia rapturous for a marketing folk. For others, it will be only slightly less interesting.

Naturally, your research should inspire changes. You might make holes more interesting by adjusting elevation and craving out hills and valleys. At present, the tool isn’t quite as natural as I would have liked, but you can adjust radius size for more exact control. You can also head into the Ground Types submenu to lay down circular patches of fairway, green, rough, as well as sand traps and mud bunkers. While creating a near-impossible hole is mischievous fun, it’s still not as satisfying as killing a Sim off from sexual exhaustion, but really- what is? 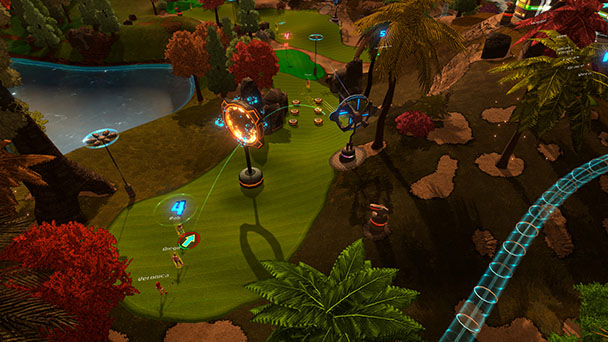 On the Green, In the Black

Once you’ve made the hole interesting, watch the money trickle in. After each hole, golfers will leave a tip that can range from a dollar to a hundred dollars. This money will be used to make additional hole, improvements to your course, add food and drink stands, restrooms, or even boost the quality of your clubhouse. Just make sure that your course isn’t infuriating your customers. This causes weeds to sprout, diverting the attention of your worker drones and hoverboard-riding, course manager, who have a myriad of other duties to tend to. Keep your customers happy, GolfTopia reminds us, or problems with sprout, grow, and eventually overcome your business. Lesson learned, MinMax.

In its current state, GolfTopia show mastery of the fundamentals but there are plenty of opportunities for expansion and balancing. Any tycoon-game veteran knows the finding the sweet spot between pricing and consumer demand is always satisfying to nail down. At present, you can build food and drink kiosks but there’s no way to price gouge ravenous golfers on the far side of your island. Another issue is the slow pace of the game. Sure, it’s easy enough to drive a trickle of revenue, and you can even speed up the passing of time. But even when you’re fast-forwarding through the game, profiteering can be a slow process especially when you’ve run out of available land. 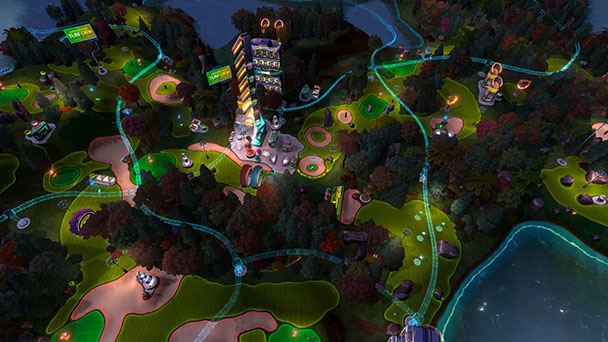 Although you can play Golftopia like Sid Meier’s SimGolf, the game also brings a bit of eccentricity to the sport. Instead of just tweaking the landscape, and adding trees and rocks, you can also lay down bumpers, flying hoops, and even fans that can change the trajectory of shots. Amusing elements like Orbital Extortion, where you can zap golfers’ wallets from high up in the atmosphere contribute a sense of puckishness to the proceedings, as well.

Although a bit costly, you can also purchase tubing that transport players around the course. Right now, there’s not much of a need, but hopefully, the game will accommodate enormous landmasses in a future update. At least right now, you can tweak variables to adjust the composition of your recreational island. 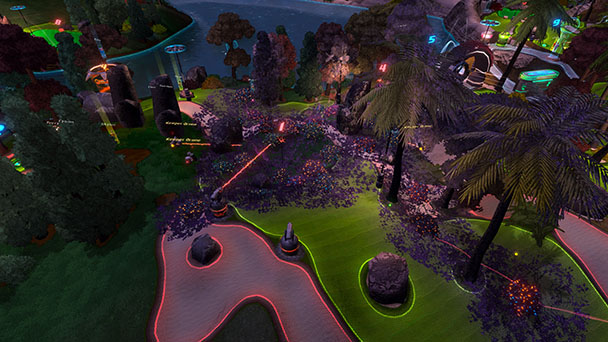 In its current Early Access state, GolfTopia can be a bit slow moving. Another issue is the game’s homogeneous goals, which push you into growing more and higher-level club memberships. Given the repetitiveness of these objective, there’s not a strong sense of motivation at present. That said, the game has some solid foundations. It’s quite fun to boot up and build a course around the seed-generated backdrop. And while it probably won’t improve your golf game, MinMax’s title just might advance your understanding of marketing.