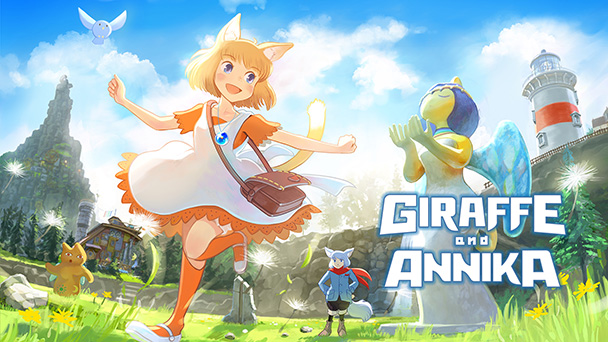 Isolated from intense shooters and strategy games that require cognitive workouts, Giraffe and Annika is a breezy and habitually beautiful six-hour adventure. But could it be a bit too serene? 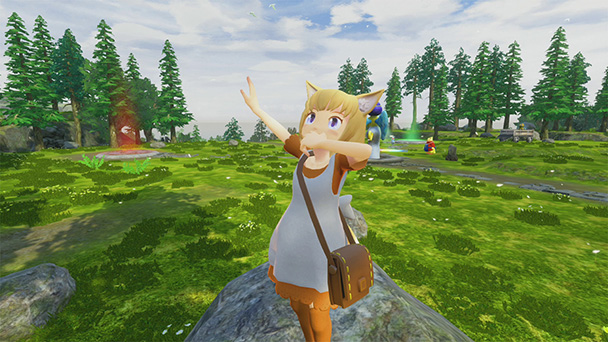 Mediums like film and television evoke a wide range of emotions. From gritty dramas to light-hearted situation comedies, there’s a movie or show to complement almost any mood. Although games cultivate a sizeable gamut of sentiments, play habitually revolves around demanding action or thorny puzzles. As players, we don’t often get the opportunity to just chill out without the worry of persistent peril.

For better or worse, the recent Switch release of Giraffe and Annika is one of the most easygoing games in recent memory. As the inaugural solo effort of Atsushi Saito, who has contributed to titles like GitarooMan, Elite Beat Agents, and Just Sing, the game makes a powerful first impression. Built on the Unreal Engine, cat-eared lead roams across a picturesque island. With a fluidity that seems to contradict the game’s remarkable draw distance, walking past verdant hills and into a wonderfully quint cottage is initially exhilarating. 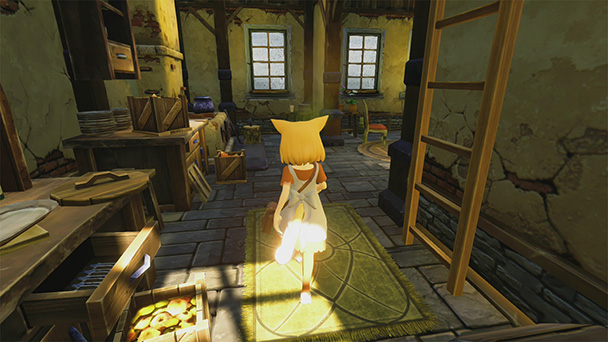 Exploring the Scenic Island of Spica

But Giraffe and Annika is no wearisome walking simulator. Soon, you’ll meet a blue-haired boy named Giraffe who implores you to enter a trio of dungeons and retrieve a trio of star fragments. Giraffe can’t enter these areas, so the burden falls squarely on Annika who venters in alone.

At first, you might think that Giraffe and Annika is going to follow The Legend of Zelda’s time-tested template, with dungeons offering a multitude of puzzles as well as items that must be used creatively to progress. But that’s not the case. Instead, they’re maze-like expanses that use a lot of the same art assets, making it far too easy to get lost. While the game could have provided a map to consult, Saito seems to want you to explore. But unfortunately, these interior spaces lack the distinctive monuments that the rest of the island has. 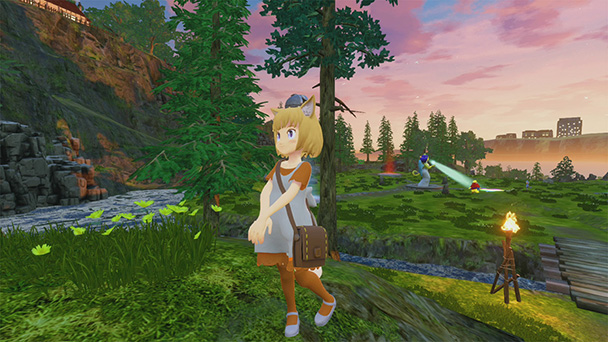 After venturing down unfamiliar corridors, you’ll come to the dungeon’s sole highlight, where you’ll face off again the resident boss. These events task Annika with shifting back and forth and tapping a button when a projectile lands in a designated zone, all in time with the music. Occasionally, you’ll have to dodge objects as well. Pleasingly, these sequences offer three difficulty levels so younger gamers as well as the rhythmically challenged won’t be completely stuck. But on the highest setting, those seeking challenge will encounter a healthy amount of exertion.

But before getting to those boss battles, players might take issue with the game’s pacifistic nature. Periodically, enemies may notice and rush toward Annika, who can run or hide behind objects. Narratively, it makes sense for a young girl to not demonstrate the strength of a seasoned warrior. But in execution, unremitting avoidance isn’t all that gratifying as a mechanic. Ideally, the game’s dungeoneering would have been a bit deeper with sneaking demonstrating a bit more sophistication. 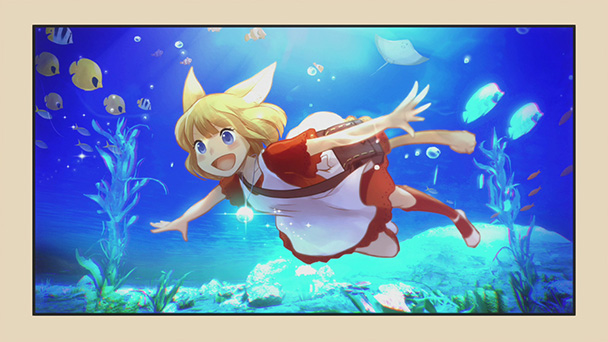 Take a Break to Watch the Sunset

But save for these design decisions, Giraffe and Annika delivers a gratifying laidback adventure. Occasionally, tasks can only be performed during the day or night. It’s here that the title flaunts once of the most impressive diurnal cycles seen on a portable system. Midafternoons brings voluminous clouds that drift by, while sunsets cast a mauve glow. In the evening, the moon arcs across the island’s sky, with lighting and shadowing to complete the mood. Luckily, you won’t have to sit around idly waiting for the next part of the day to pass, since Annika has a number elective tasks to accomplish, courtesy of the local populace.

Although there’s backtracking, Giraffe and Annika gently guides players along, occasionally prohibiting access to certain areas of the island until color-coded keys are obtained. Other times, the island does employ a bit of Zelda-esque tradition, with a power-up providing a method of getting into a new area. Exploration will inevitably lead to the collection of “Meowsterpieces”, paintings of cats. Smartly, these are more than just a purposeless pursuit, and Annika will gain new outfits for your hunting efforts. 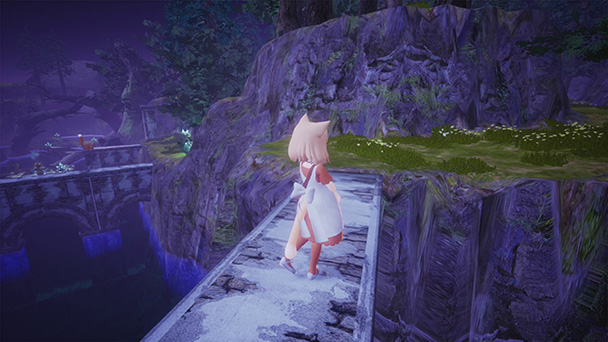 Narratively, the title never overburdens players with garrulous conversations or long bit of exposition. Instead plotting is done through succinct conversations or even better, through adorably drawn manga-style panels. At the beginning of the game, Annika is stricken with the age-old scourge of amnesia, placing an aura of mystery around her interactions. While that might be a bit cliched, injecting a bit of the melancholic into an otherwise sunny setting, does endow the storytelling with a bit of distinction. Certainly, the game’s gentle soundtrack, which picks up during boss fights, helps the title carve out its own charming identity.

At its best, Giraffe and Annika captures the thrill of reconnoitering an island filled with natural wonder.  Often, there’s a sense of childlike wonder while trekking across Spica, and it’s a sensation that few portable games cultivate. Sure, it’s slightly undermined when heading into the game’s dungeons, but before long, you’re back outside, basking in what Giraffe and Annika does best. 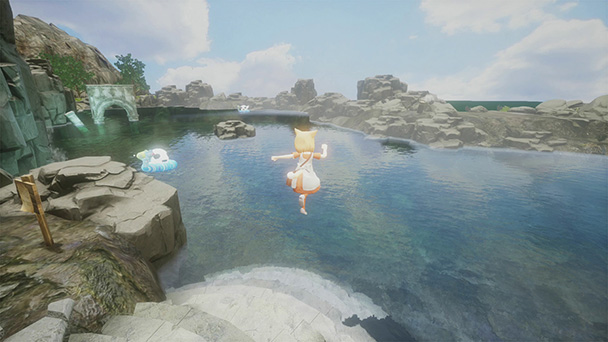 Giraffe and Annika was played on Switch
with review code provided by the publisher.

Giraffe and Annika review
Isolated from intense shooters and strategy games that require cognitive workouts, Giraffe and Annika is a breezy and habitually beautiful six-hour adventure. But could it be a bit too serene? Mediums like film and television evoke a wide range of emotions. From gritty dramas to light-hearted situation comedies, there&rsquo;s a movie or show to complement almost any mood. Although games cultivate a sizeable gamut of&hellip;

Summary : Many adventures games contain rooms with inorganic puzzles among vast spaces of emptiness. Giraffe and Annika inverts form with a focus on the beautiful of the larger environment. Sure, the rhythm-game component is fun, but chances are you’ll be yearning for the next part of the island to open up. That’s the real reward here. 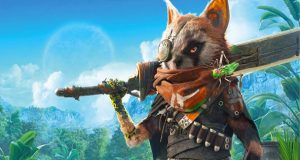 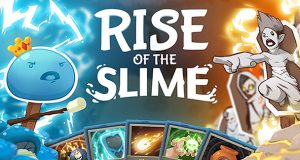 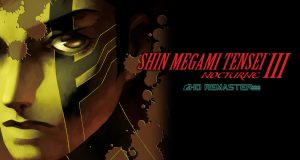