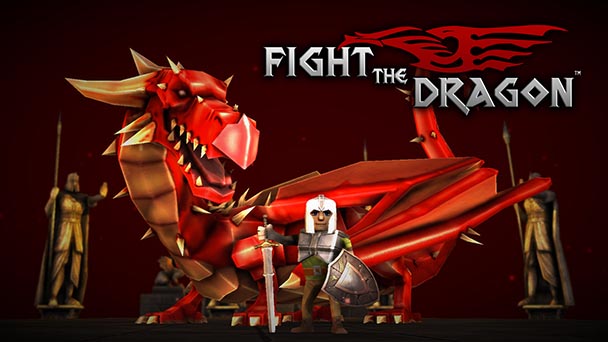 The idea of a game relying on community curated content to increase its longevity is one which PC gamers have been familiar with for well over a decade. Fight the Dragon seeks to take this mantra one step further, by creating an experience that is handled almost exclusively by its player base.

At its core, Fight the Dragon is a hack-and-slash RPG. Users are presented with four possible classes to choose from, and are then given a small patch of land to explore which serves as the game’s main hub. Here players can choose what adventures they want to partake in, change gear and more. 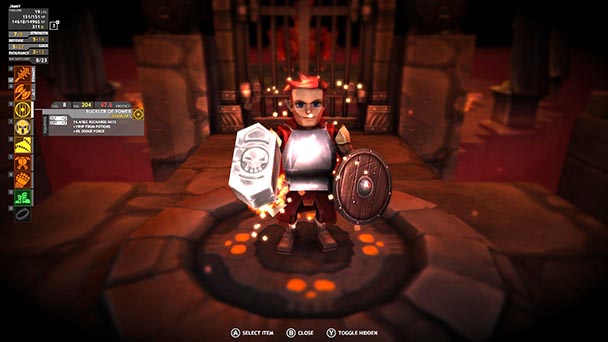 By choosing to adventure you’re brought to a never-ending set of grey tiles, each representing a map. Here you can add a random user-created adventure or manually search amongst the available quests. This menu system is easy to use and allows players to easily re-visit their favorite maps. Unfortunately, I seemed to have hit a bug which prevented me from accessing Fight the Dragon’s servers. As a result I was blocked from multiplayer playthroughs as well as any user generated content, being instead limited to a mere nine maps.

Considering the title is still in Alpha bugs and other issues are to be expected, and having notified the developers I trudged on. The simplistic lego-like art style instantly caught my eye, from characters to structures and fauna  everything had a simplistic but appealing blocky look; very fitting for a build-it-yourself game. 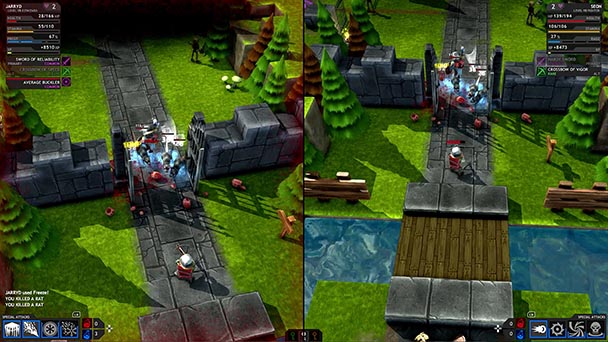 Combat is handled much in the same way you’d expect from your typical hack-and-slash. Bringing down enemy mobs is satisfying but far from mindless, a few of them will require players to block, dodge or use the allotted class skills. Levelling up is a simple affair, upon reaching the required experience cap, characters are allowed to add a point to one of four possible stats. 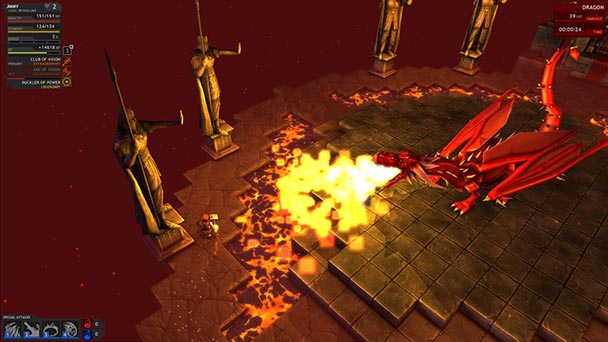 The character can grab and carry certain objects, hop between spaces or even climb to platforms standing just above their heads. This allows for clever puzzle design and exploration, something which the developers hinted on through the game’s pack-in levels.

Apart from the previously mentioned online bug, I was struck by two others which forced me to exit the game. The first prevented me from deleting characters, every time I attempted it, Fight the Dragon would stop responding. The other issue caused my character to freeze when dropping from ledges. These issues will hopefully fixed as the game approaches its final release. 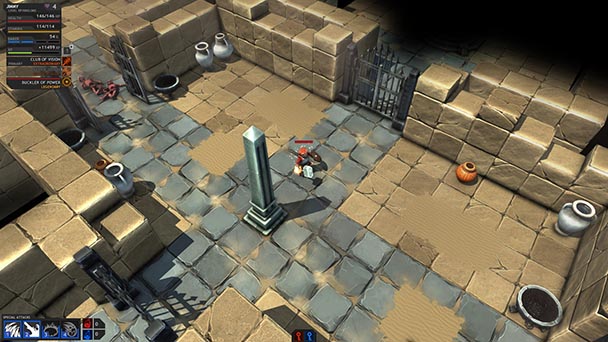 Upon completing missions played are granted dragon scrolls and then brought back to the hub world. Collected loot may be stored or donated at a shrine. The more gear, gold and items are donated the higher the chance of being rewarded with rare equipment. Dragon Scrolls may be redeemed towards fighting the titular Dragon. However, tather than killing it in one go, players are expected to weaken it, gaining rewards for each milestone reached.

Fight The Dragon is a fun indie title with a lot of potential, sadly, bugs prevented me from enjoying this to its fullest. If the developers manage to maintain an active community and improve on these technical issues we may have a constantly evolving and ever growing hack-and-slash RPG worthy of your time.