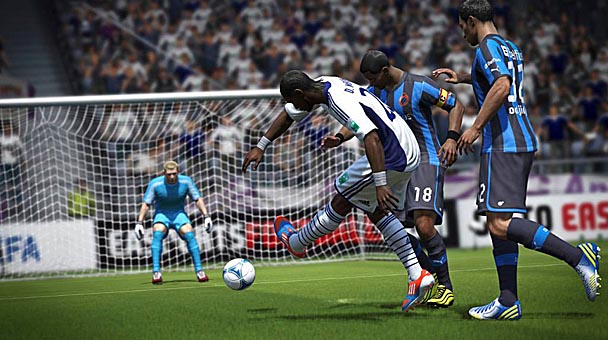 Since its transition onto now-gen consoles back in 2005, the FIFA series has made some significant advances across each off-season. From FIFA 08’s addition of the involving ‘Be a Pro’ mode, 10’s inclusion of 360-degree player movement, along with the implementation of tactical defending and one-touch control across the last two years, each annual iteration has ushered in at least one substantial addition. The recent release of FIFA 14 for the PlayStation 3 and Xbox 360 demonstrates the footie franchise mirroring a superstar athlete at the apex of his career. Having conquered the fundamentals of the pastime, improvement is limited to the minutia- as he rides out the twilight season, ready to pass the torch to the next generation.

On the pitch, FIFA 14’s pace has been slowed slightly. This adjustment not only makes each match a bit more methodical, but allows gamers to appreciate the improvements made to the player movement and shooting mechanics. With a retooled animation system, athletes move convincingly, with defender-evading pivots and cuts seeming much more organic. When dribbling, it no longer feels as if the ball is magnetized to the player’s cleats. Now, ball control is tied to the speed of your athlete, with streaks propelling the ball to a precariously far-flung position. The game’s new Protect the Ball feature adds an additional tool to the attacker’s arsenal, allowing gamers to use the left trigger to extend an arm toward encroaching defenders. 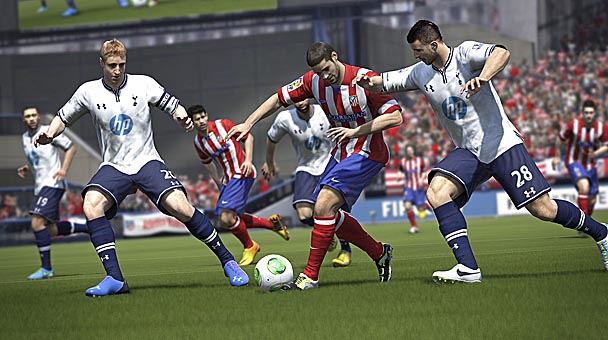 Although not an instrumental addition, Pure Shot adds nuance every time the ball is launched toward the goalmouth. Now shot trajectories demonstrate much more variety, often mirroring the unpredictability of an actual match. While textbook shots can assault the corners with a satisfying precision, now FIFA 14 more closely examines player position and poise, allowing off-balance strikers to still put up some threatening shots. The adjustment to the physics system undoubtedly adds excitement to the game, with rebounds off of goal posts creating some fantastically impassioned situations.

EA Canada touts improvements were made to athlete artificial intelligence. Disproportionately, the game’s defense seems to have received the bulk of the boost. When gamers are possession of the ball, expect to see defenders sprinting in an effort to shut down passing lanes and when playing on higher difficulty setting, tackle with a newfound intensity. As such, EA Canada has effectively neutered the ‘dash and dish’ strategy that players have relied on for years. Now, moving the ball downfield is a gratifying challenge. Passes require both patience and precision; err on either the trajectory or force, and you can expect to lose possession, especially on the through-ball. Likewise, dribbling encourages players to use the range of their repertoire, lest the ball get picked off by some eager athlete. 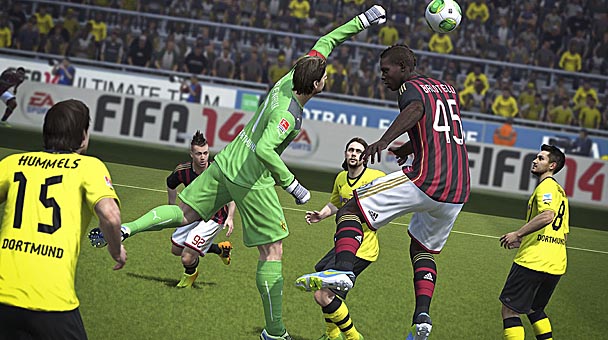 Unfortunately, your teammates seem to demonstrate difficulty in dealing with the bolstered defense. Habitually, players won’t try to actively break the grip from a defender, which can make passing a bit of a chore. If the ball lands in an open part of the field, you can count on a lack of exertion from your team. Too often your players don’t reveal a situational awareness, allowing the other team to take possession all too frequently. That said, when a member of your team manages to read your mind and break toward the goal at the right instant, the effect can be euphoric.

For those with aspirations beyond the pitch, a number of changes alter FIFA Ultimate Team and Career Modes. Online single matches make a return after being absent from last year’s iteration, and the number of divisions has increased, extending the scale of FUT’s time commitment. Chemistry ups the intricacy of Ultimate Team’s already RPG-esque component, allowing gamers to establish the style of their players. Pleasingly, each distinct class nurtures different attributes- with many roles augmenting the abilities of teammates. For those who prefer to don loafers instead of cleats, the inclusion of the Global Transfer Network advances FIFA’s scouting component. Now, players send lookouts to different countries, assigning certain attributes that they should seek out. Although a seemingly diminutive addition, talent searches push Career Mode that much closer to reality. 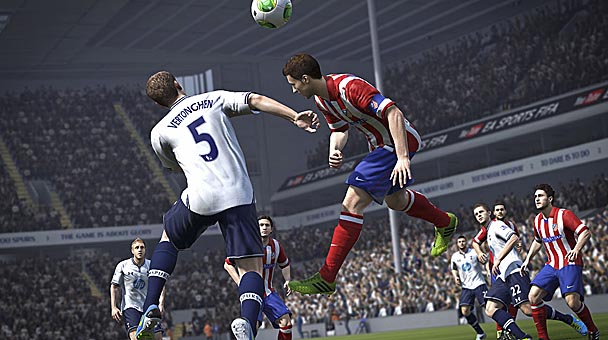 Aesthetically, FIFA 14 doesn’t make any significant improvements, save for a few tweaks to make matches a little clearer and vibrant. The game’s user interface receives an overhaul, drawing inspiration from Windows 8 Metro design. While the system is functional, the transition from touch screen to game controller means that gamers are forced to use the right thumbstick for sub-menu navigation, which feels a bit unwieldy. Additionally, the occasional stutter obscures the impact of the clean-looking UI. Elsewhere, FIFA continues to converge on the quality of a television broadcast, with dynamic transitions and commentary which references real-world data.

While gamers that are fervent about FIFA will enjoy the amendments that this year’s iteration brings, the hardcore may want to wait until the Xbox One and PlayStation 4 versions arrive. Built on a new engine which purports to render realistic crowds and give an improved awareness to virtual athletes, this could be the definitive version, as long EA Canada doesn’t cut any content. For players committed to the current generation, FIFA 14 stands as the pastime’s current pinnacle, offering a nominal advancement over last year’s game. 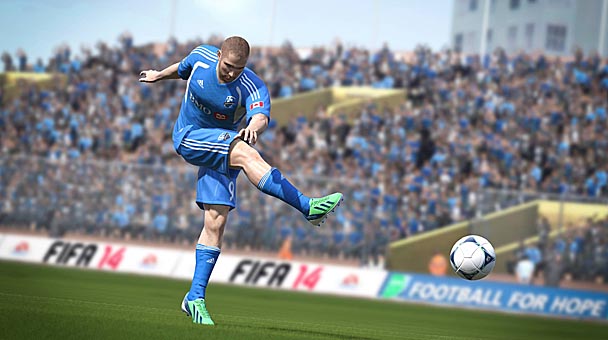 FIFA 14 Review
Since its transition onto now-gen consoles back in 2005, the FIFA series has made some significant advances across each off-season. From FIFA 08&rsquo;s addition of the involving &lsquo;Be a Pro&rsquo; mode, 10&rsquo;s inclusion of 360-degree player movement, along with the implementation of tactical defending and one-touch control across the last two years, each annual iteration has ushered in at least one substantial addition. The recent release of FIFA 14 for the PlayStation 3 and Xbox 360 demonstrates the footie franchise mirroring a superstar athlete at the apex of his career. Having conquered the fundamentals of the pastime, improvement is limited&hellip;

Summary : FIFA 14 represents an evolution rather than a revolution, refining several facets of last year’s iteration into the best footie game around.