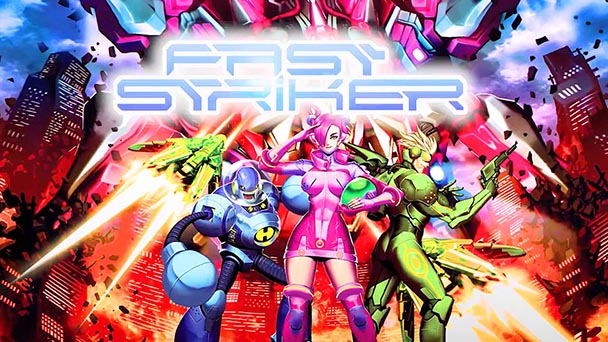 Peruse the PlayStation website, and you’ll discover that Sony has removed most evidence of the Vita’s existence. But despite the purge, a few diminutive publishers are still releasing software for the beloved portable system. EastAsiaSoft’s Fast Striker might be one of final shmups to be released on the system, and while it pales in comparison to efforts like Dariusburst Chronicle Saviors, Söldner-X 2, and Aqua Kitty, cross-buy functionality and an inexpensive price help offset the game’s simplistic approach.

If you’re a retro enthusiast, the game’s moniker might sound familiar. Fast Striker seems to sympathize with defunct hardware and was previously released on the NeoGeo and Dreamcast long after both systems have exited from retail shelves. Although it’s also playable on the still-vibrant PlayStation 4, the game’s appearance on the Vita demonstrates German developer NGDEV’s allegiance with timeworn platforms. And if you haven’t heard of the vertically-scrolling title, then you probably won’t be surprised that the game’s mechanics and visuals are rooted in Nineties-era shooters. 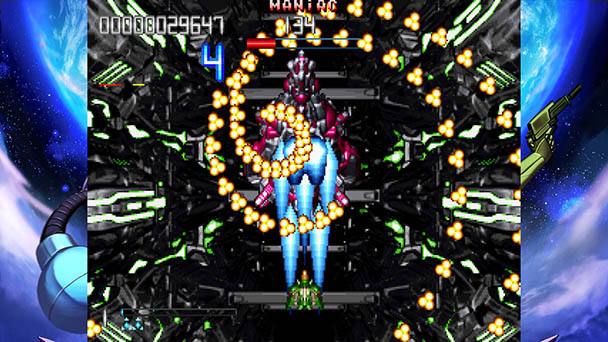 Select one of the game’s four difficulty levels and you’ll soon be escorted through antagonistic outer space to tackle the game’s six-mission trek. The game’s two easiest challenge settings play similarly, with your lone ship confronting waves of foes moving in serpentine patterns, punctuated by sub-bosses and bosses that like to fill the screen with projectiles. Although Fast Striker is shockingly free of firepower-augmenting power-ups, the game does offer different offensive approaches.

In both the lower two difficulty settings, novice and original, holding down the fire button slows you ship speed. This is useful when skirting through the narrow breaks in clouds of enemy fire. After a slight delay, its also emits a wide stream of shot, which is particularly useful for narrowing the number of attackers in the game’s near-widescreen format. Feather the button and your offensive opponent narrows, which is useful for those perky foes that take multiple hits to eliminate. When you’re not holding down the fire button, score-boost collectable stars are magnetically attracted to your vessel, incentivizing the use of both modes. Finally, there’s the incorporation of shields which can be activated manually to crash into opponents or will trigger automatically upon inadvertent collision. 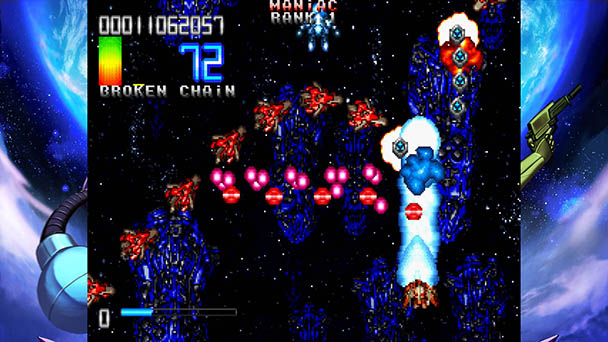 You also have a button for rear fire, which you won’t need much across the first three stages of the easier challenge settings. But ramp things up to Maniac or Omake levels, and you’ll definitely need to thwart adversaries trying to approach from behind. These two modes radically change Fast Striker’s gameplay, emphasizing practiced play. Here, holding down a fire button releases a penetrating laser beam, which turns green after coming into constant contact with enemies. This signals a scoring boost but doesn’t have an effect on the weapon’s potency.

Scoring chasing is emphasized here, with bonuses for eliminating enemies in close proxemic space. You’ll also have to maintain a foe-killing combo where a multiplier will deplete if the extermination halts for too long. Sadly, the game got rid of the Dreamcast’s workaround for online leaderboards. That version of Fast Striker used to spit out a code that you’d enter online that would substantiate your scoring prowess. 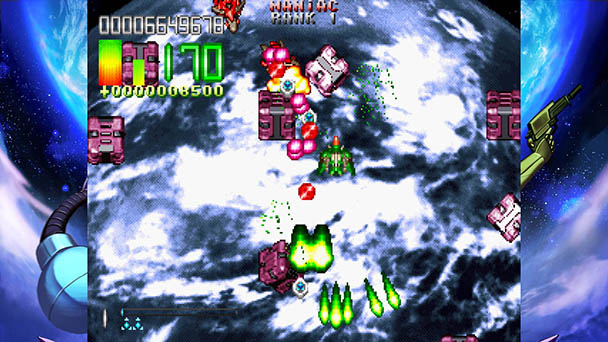 Aesthetically, Fast Striker draws inspiration from the TurboGrafx-16/PC Engine Era. There’s a decent amount of different enemy types, who exhibit a variety of behaviors. With their squatty form, subordinates don’t look too menacing, but boss ships with grimacing faces are more threatening and channel an Alien/Devil’s Crush vibe. Backdrops aren’t too intricate, exhibiting moving cityscapes, but they are pleasing monochromatic, which helps makes the projectiles visible. Sonically, the game’s throbbing techno soundtrack doesn’t an admirable job at establishing a frenzied pace.

Firmly rooted in late ‘90/early 2000 shmup design, Fast Striker might lack the sophistication of those seeking a thoroughly modern or innovative shooter. But if you are a fan of the classics, the title has a lot going for it, especially if you own both a PlayStation 4 and Vita. Price is almost always a point of contention, but here EastAsiaSoft made a prudent decision by releasing the game at seven dollars. Vita fans, this might not be a faultless sendoff, but if it’s the system last shooter, we’ll be leaving with our head held high and trigger finger suitably calloused. 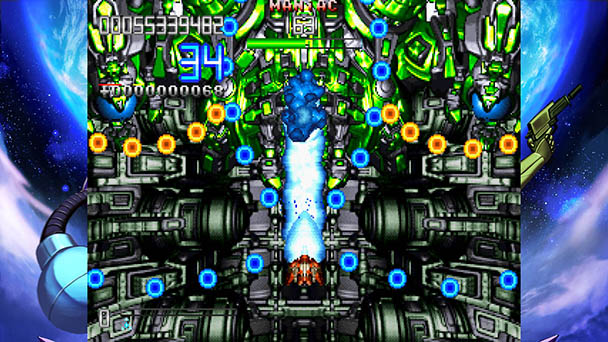 Fast Striker was played on the PS Vita with review code provided by the publisher.

Fast Striker review
Peruse the PlayStation website, and you&rsquo;ll discover that Sony has removed most evidence of the Vita&rsquo;s existence. But despite the purge, a few diminutive publishers are still releasing software for the beloved portable system. EastAsiaSoft&rsquo;s Fast Striker might be one of final shmups to be released on the system, and while it pales in comparison to efforts like Dariusburst Chronicle Saviors, S&ouml;ldner-X 2, and Aqua Kitty, cross-buy functionality and an inexpensive price help offset the game&rsquo;s simplistic approach. If you&rsquo;re a retro enthusiast, the game&rsquo;s moniker might sound familiar. Fast Striker seems to sympathize with defunct hardware and was previously&hellip;

Summary : Although Sony seems to want to put the much-loved portable behind them, Fast Striker shows the system just won’t go out easy. Here’s a swan song with a speedy pace, screens filled with bullets, and a variety of play modes that feels like it was conceived before the Vita was manufactured.