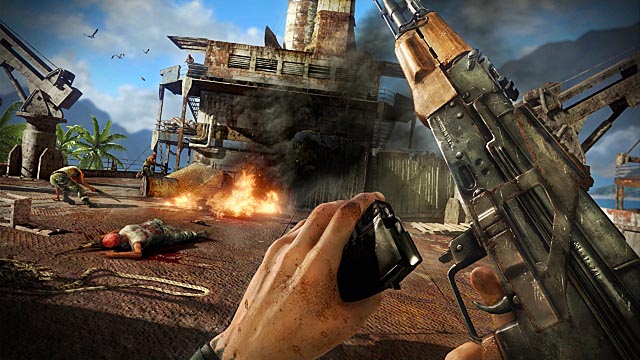 In 2008’s The Dark Knight, Alfred offers up an astute analysis of the Joker’s motivations to Bruce Wayne- “Some men just want to watch the world burn.”  With an unmatched conflagration algorithm which let players ignite propagating wildfires, Fry Cry 2 indulged these destructive desires. Unfortunately, the game’s glitches, pacing, and regenerating enemies took some of the fuel away from the fire.

Prudently, the recent release of Far Cry 3 for the Xbox 360 and PlayStation 3 mends many of its predecessor’s woes. Freed from the obligation of constantly finding a fix of anti-malarial medication and for rusting weapons, players are free to explore the title’s sumptuous island at their own pace. At times, this open-world autonomy can make the title feel like Skyrim with SMGs. Whether players want to follow the main storyline or just spend hours overthrowing pirate strongholds, gather ability-boosting flora, or hunt wild game- Far Cry 3’s exotic isles are paradises of unrivaled profundity. It’s difficult to hike across a hillside without observing at least three or four activities vying for the player’s attention. 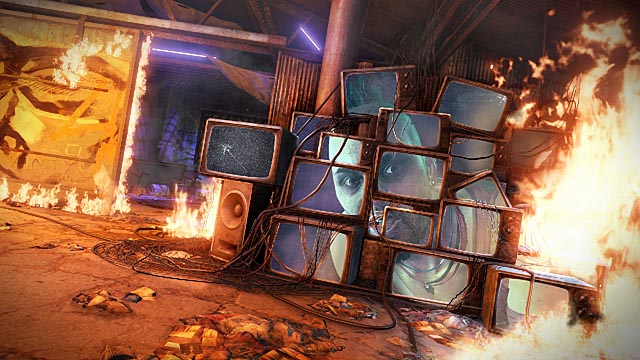 Yet, these types of sandbox sovereignties are often accompanied by a skeletal narrative to drive the action. Recalling the tenets of an effective firefight- Far Cry 3 delivers short, controlled bursts of exposition- which are habitually hit the mark. An opening cinematic details the exploits of a group of young, hedonistic Americans using exotic landscapes as playgrounds for their extreme sports. As viewers of Midnight Express, Return to Paradise or Hostel already know, the allure of debauchery obscures the specter of danger. In Fry Cry 3, this menace is personified by Vaas Montenegro- an antagonist whose every bit as chaotic and crazy as Dark Knight’s Joker. But where Christopher Nolan’s villain was restrained by a PG-13 rating, Vaas’ and his henchmen’s gruesome actions come closer to the coarseness of a hard ‘R’.

Unsurprisingly Vaas’ repugnant actions are met with the escalating brutality of the lead character- who following trope, secures an increasingly overwhelming arsenal able to decimate any opposition. Although NPCs occasionally probe the mounting mercilessness and detachment of the protagonist, the title’s narrative trajectory remains fixed, exhibiting developments that are supposed to be unsettling, but occasionally just feel forced. Despite the game’s a self-directed activities, there’s scant room for affecting the lead’s plunge into savagery. 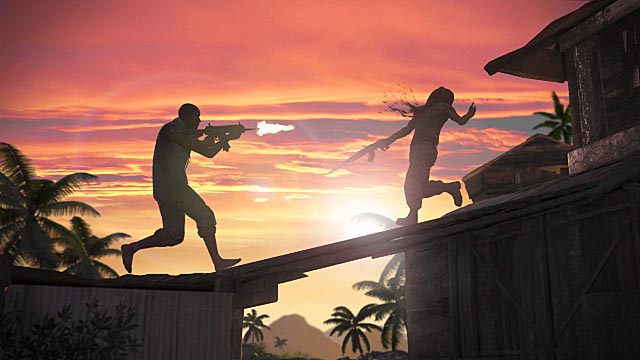 For many, Far Cry 3’s engaging action will draw attention away from the compulsory brutality, awkward cultural mysticism (where tribal taboos confer powers) and outmoded White savior motifs. Pleasingly, the title regularly offers a worthwhile impetus for each mission. Overtaking radio transmitters recalls the View Points of Ubi Montreal’s Assassin’s Creed series, tasking players with scaling a soaring, creaking structure. Disabling an electronic box electronic at the top of the tower fills in the player’s map with adjacent geographic details and confers new weaponry. Overrunning pirate nests is even more fulfilling, with each outpost supporting multiple methods of conquest. Proposing possibilities for the stealthy elimination of peripheral enemies, brute force shootouts, or the release of a lethal caged to wreak havoc from within, takeovers support a variety of satisfying strategies. Toppled territories then become a base of operation for allies, lending the feeling that players are leading a swelling group of rebels toward an eventual upheaval. Although Far Cry 3 may lack the color-coded indication of The Saboteur, the sense of disruption is just as keenly articulated.

Even the prototypical fetch quests are performed with purpose. Collected flower buds can be crafted into healing or ability-boosting syringes. Acquiring the skin of animal allows the protagonist to expand his carrying abilities, creating gear to transport additional quantities of currency, collected items, weapons, arrows, and explosive items. The killing of aggressors bestows experience points which can be spend across multiple tech trees- with branches bursting with augmentative options. Naturally, the typical side quests litter Far Cry 3’s island, challenging gamers to deliver medicine on ATVs or kill a number of foes in a specified time. Like most sandbox games these diversions offer a bit of variety, but they also seem oddly juxtaposed with the game’s storyline. 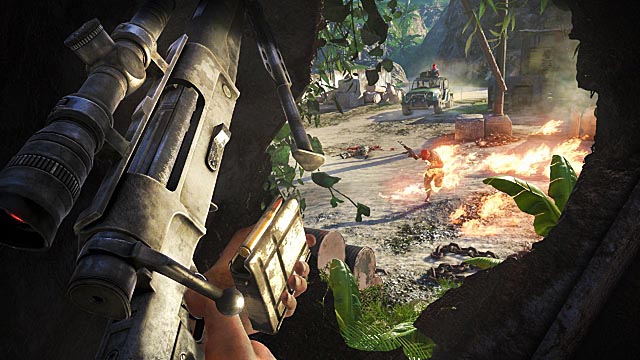 Look past the title’s sizzling action and Far Cry 3’s real feat becomes discernible; the game offers a dazzling simulation of an intricate ecosystem. When exploring Rook Island, it’s not uncommon to see a tiger chasing its prey or vultures picking at the corpse of a defeated pirate. Likewise, the game’s topography and architecture is equally impressive- filled with breathtaking vistas, cascading waterfalls, and the occasional interior teeming with startling detail. A title as ambitious as Far Cry 3 is bound to have the occasional bug. Although players may witness respawning enemies or the occasional unresponsive NPC, the game also handles the broad range of player behavior well. More than once I was able to jump off a hang glider and land with major injury at the precipice of a radio tower. Amusingly, each time my aircraft was shown at the top of the structure, jutting out like an umbrella in an upscale cocktail.

While Far Cry 3’s single-player campaign is the disk’s highlight, the addition of cooperative and competitive multiplayer components prove to be unexpectedly adept. The former tasks a quartet of players through a selection of largely linear levels, peppered with the sporadic set piece which requires heedful collaboration. Pleasingly, co-op doesn’t feel like a jumble of disjointed single-player stages, instead providing a challenge which builds to a passionate crescendo. Multiplayer’s only indiscretion is that is cribs from Call of Duty– with a familiar system of upgrades, unlocks, and kill streaks amidst its selection of Deathmatch and King of the Hill game modes. Otherwise, the game’s matches are absorbing and elevated by the level editor which allows combatants to design your own maps. 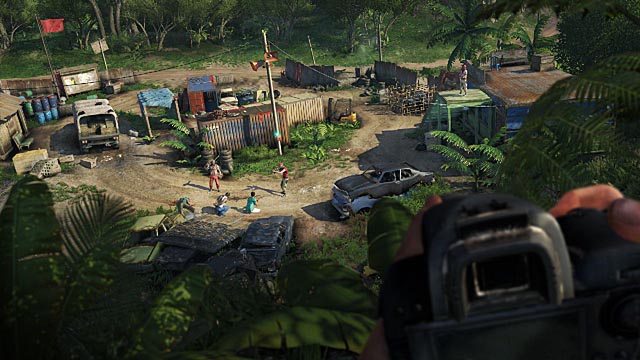 After a season of homogenous corridor shooters, Far Cry 3’s autonomy is both refreshing and encouraging. The recent flood of FPS thrill rides have produced some visceral experiences, yet many have traded interactivity for bombastic set pieces. Ubisoft Montreal puts players in control of an awesome supply of hardware, crafting an excursion that decrees the attention of action-oriented gamers. If the studio could offer the same locus of control over the protagonist’s disposition, Far Cry 3 could have the game of the year. Instead, it will have to settle for garnering a very close runner-up status.

Previous: Hitman Absolution Review
Next: Podcast 11-9: Dead and Loving It