E3: NIS America Tempts with a Trio of Titles, Dood 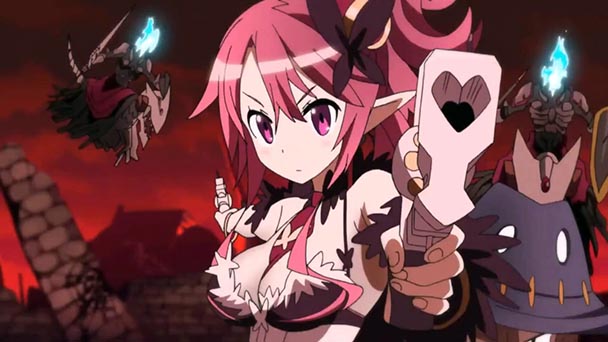 Although E3 press conferences from the major publishers focused on games geared for mainstream appeal, obsessive otaku can take solace in NIS America’s upcoming batch of niche-targeted games. The Santa Ana-based company showed off a trio of tantalizing titles: Disgaea 5: Alliance of Vengeance, Danganronpa Another Episode: Ultra Despair Girls and Rodea the Sky Soldier.  While each game offered its own distinctive brand of quirk, taken collectively the triad demonstrated NISA’s acute understanding of its fanbase.

Last December, Sohei Niikawa’s misconstrued comments made it sound like the fate of Nippon Ichi hinged on the success of Disgaea 5: Alliance of Vengeance and fervent fans grew understandably apprehensive. While the comment was intended to be puckish, it’s obvious that the Gifu-based team has diligently toiled on Disgaea 5, as if their livelihoods truly depended on sales of the game. Shifting the franchise onto Sony’s now-gen hardware, the title looks expectedly picturesque on the PlayStation 4, as dozens of Takehito Harada’s high-definition sprites filled each screen. Unsurprisingly, the game’s beauty also extended to its trademark battle animations, which edged on anime-quality, as characters deducted thousands of hit points in full screen spectacle. 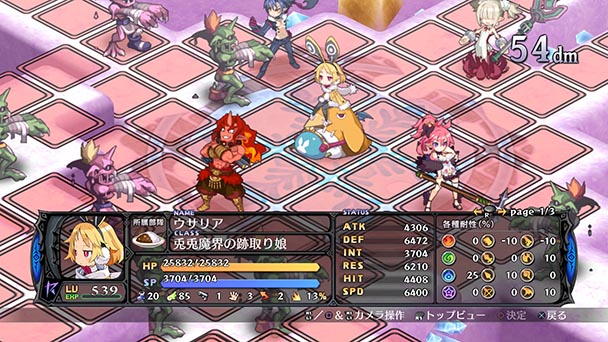 Most interesting is the game’s apparent two-pronged approach to audiences. While delivering the typical tenets of Disgaea along with a few new elements to please series fans, the title also appears to reaching out to players who haven’t plumbed the netherworld. Noticeably, character movement speed is quicker and new options such as being able to throw characters and object diagonally up Alliance of Vengeance’s accessibility. While previewing the game’s entire sixteen chapter opus was impossible during an hour-long meeting, Niikawa-san has hinted that the storyline is aiming for a larger audience this time out.

For returning players, Disgaea 5 promises a number of motivations to head back to the grid-based battlefields. This time the plot revolves around a vile emperor known as Void Dark, who with a band of demon minions called The Lost, have taken control of the multiple netherworlds. As such, revenge is the dominant theme throughout the game, as the leaders of each netherworld team up to take down the thread. While NIS America’s reps didn’t want to divulge too much, players can infer than the storyline will weave in a number of cameos, fighting alongside new characters like Killia, Seraphina, and Usalia, a heroine who rides a yellow prinny. 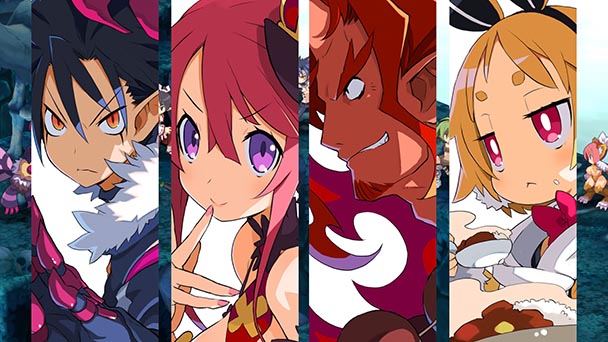 A number of changes to the combat system await gamers. The addition of Revenge Mode extends an opportunity for reprisal; if a character is defeated, there’s a change that allies will becoming more powerful and have access to new abilities. Presumably, instigation is tied to the relationship cultivated between the two characters. Sub-weapons are another notable new feature, giving the game’s classes access to additional offensive devices through the skill menu. Speaking of classes, Alliance of Vengeance augments its existing archetypes with a number of new ones, including a gun-toting maid, a dark knight with melee weapons, and a fairy that’s skilled with support magic. Characters who perform especially well in battle can now earn “MVP” status, gaining addition experience for their efforts.

Set between the event of Danganronpa: Trigger Happy Havoc and Goodbye Despair, Danganronpa Another Episode: Ultra Despair Girls is an interesting spin-off which shirks the visual novel like structure of the series, offering gamers a third-person action adventure excursion. Players assume to the role of Komaru Naegi, the younger sister of the first game’s protagonist, Makoto Naegi. Having spent over a year and a half imprisoned inside an apartment building in Towa City, Komaru gradually accepted her fate, abandoned any hopes of escape. But when a Monokuma breaks down a door and storms the apartment complex, the heroine flees to an outside word that has radically changed. Most concerning, children now control Monokuma, and have begun hunting down adults. 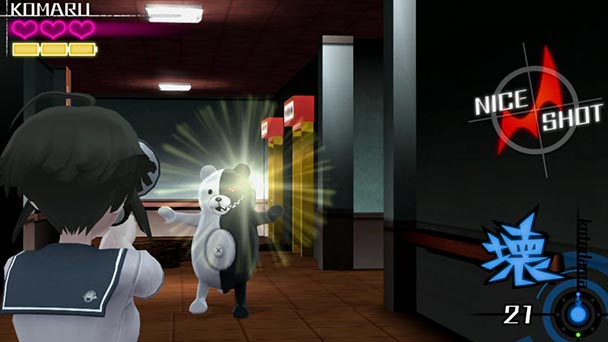 Hope arrives in the form of a tool known as the Hacking Gun, giving by Toko Fukawa, the Ultimate Writing Prodigy from Trigger Happy Havoc. Beyond the tense exploration and puzzle solving, enjoyment stems from the interplay between Komaru and Toko. While the former is a prototypical, cheerful schoolgirl, Ms. Fukawa suffers from multiple personality disorder, which is triggered when she sneezes or sees blood. The short slice of dialog demonstrated some comical banter between the two girls, which was substantial enough to provide context for the action sequences.

Skulking around Ultra Despair Girls’ environments felt sufficiently suspenseful, as we approached every corner expecting a monochromatic bear to pop out, or at least an utterance of “upupupu” to signal his arrival. Not that’s there’s time to loaf; an early mission sent Komaru on an expedition to restore electricity in the environment. This mission allowed us to see a couple of the Hack Gun’s eight functions, as we stitched ammo types to reactive a break, and changed again to fend off a pack of encroaching Monokuma. Pleasingly, there’s nuance to the combat, with players increasing the damage of their next show if they are able to hit the beastly bear in his glowing eye. 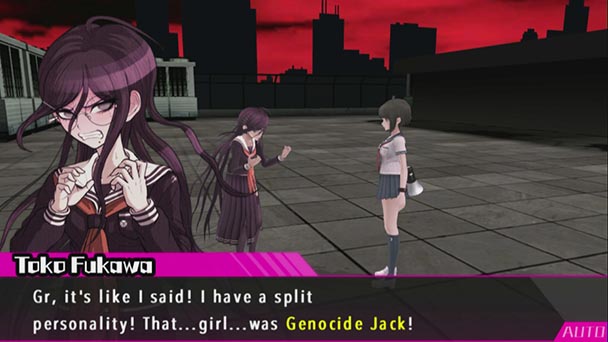 Interestingly, Danganronpa Another Episode was the only action-based title NISA was showing, with Rodea the Sky Soldier proposing to take players on an airborne adventure. Given director Yuji Naka’s (Sonic the Hedgehog, NiGHTS into Dreams) pedigree, we expected to be either careering through the game like the Blue Blur after a spindash-powered jump or leisurely gliding around like Nightmaren. However, the Wii U-based title came with a modest learning curve, as we used the Gamepad to first jump, then to direct a crosshair which placed Rodea on a flight vector.

After several collisions with the floating environments, control gradually became manageable, and we were breaking open containers and even bounding across small moving platforms. With navigational worries put aside, it became easier to admire the game’s sense of scale, with stages that stretched out into the distance horizon. Although we were on one of the game’s first stages, there was a sense of tranquility rooted in Sky Soldier which endows the title with a distinctive feel. Once the final build is released it’ll be interesting to see if players prefer the original, unreleased game that employ motion control, or the Wii U iteration that takes a more traditional approach. 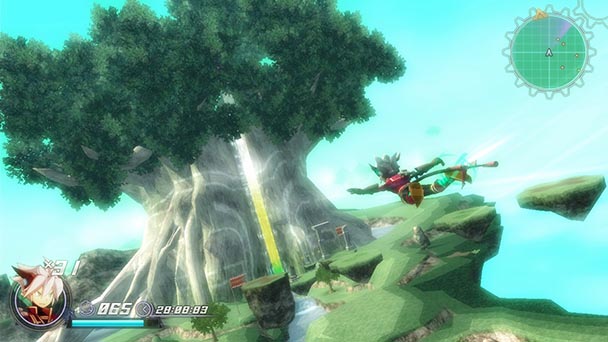 While NIS America’s E3 showing was quite as prolific as XSEED’s exhibition, their trio of upcoming titles appears fated to please fans of niche games. As such, autumn will be a pivotal season for the publisher, with Ultra Despair Girls releasing September 1st, Sky Soldier due on October 13th, and Disgaea 5 dated for the fall. By the looks of things, Niikawa-san’s presidency and NIS’s prominence seem protected by a portfolio of promising games.