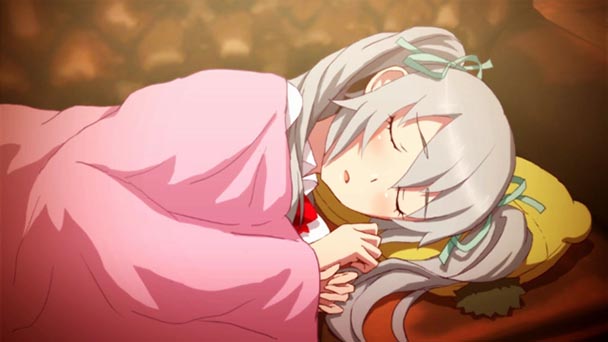 E3 is four day event in which you endure an unremitting assault on the senses to experience fleeting moments of elation. Between the deafening dub-step, pushy PR people, and crowds of courtesy-deficient attendees, the show can be mentally and physically exhausting. Mercifully, there are brief moments that can make you forgot all about these irritants, as you lose yourself in an ephemeral surge of iridescent pixels and quirky game ideas.

Heading into the expo, I know Akiba’s Trip: Undead & Undressed was a requisite game to demo, and I was saving a playthough for the last day of the show as an eleventh-hour rejuvenator. Yet, when I spied the title at deserted kiosk on the outskirts of the Sony showfloor, I couldn’t resist taking the title for a quick spin. Skulking through a meticulously-crafted model of Japan’s celebrated electronic district to rip the clothes from otaku-predators was one of the cathartic experiences I needed after a string of bug-riddled demos. 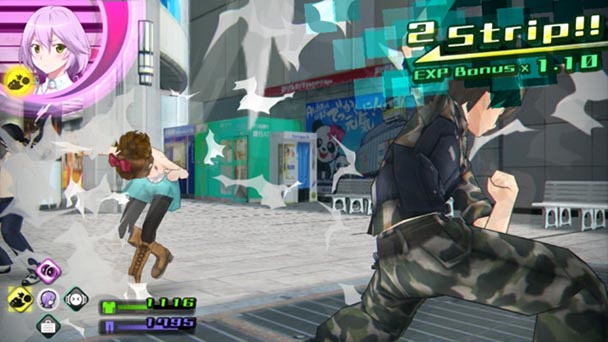 Unfortunately, it seemed the higher-ups at Sony weren’t comfortable with a game where the protagonist is tasked with disrobing sexy vampire-like creatures. Instead of the showcasing the signature gameplay of Akiba’s Trip, they exhibited a sanitized mini-game which resembled the AC-130 missions from Call of Duty: Modern Warfare. After a few minutes of using bombs to keep groups of opponents from attacking a pair of crystals in the middle of the screen, I was almost ready to write-off Undead & Undressed. Fortunately, a demo at XSEED’s both revealed the type of gameplay that I had expected.

Peer past the cosplaying booth assistants dressed as a French maid and a Senran Kagura character and gamers could find the unfeigned demo of Akiba’s Trip. Here, I was able to free-roam through a reasonably simulated facsimile of Akihabara- which while sparsely populated, offered a recognizable assembly of anime and manga outlets, maid cafes, and Akiba’s gathering of game stores. From the start of the demo, I was able to identify a few landmarks- from the Sega Club building at the south end of Chuo Dori to the nine-story Yodobashi Akihabara superstore. Naturally, logos were missing or obscured, but overall the architecture was pretty spot-on, making Undead & Undressed a requisite title for anyone who considers Akiba their personal mecca. I was told that over 130 actual stores gave developer Acquire permission to be included in the title. 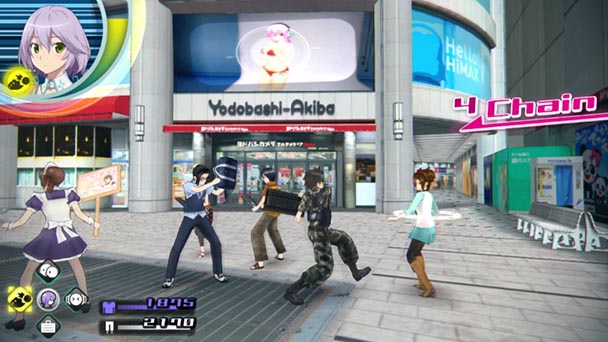 Following a brief sojourn to see if Super Potato made it into the game, the booth attendant directed me to press the PS Vita’s circle button so I could scan the area for suspicious interlopers. While the first few examinations proved fruitless, the following search showed a young women with a glitching silhouette, which was the indisputable sign that she was a bloodsucking demon called a Synthister. Before she could extract the lifeforce from one of my otaku brethren, I initiated a fight, using button presses to whittle away her heath bar. With the demoness wounded, I needed to expose more of her skin to the danger of daylight, and was prompted to press one of the Vita’s facebuttons to remove her shirt or skirt. Obviously, the sexy synth didn’t want to liberated of her protective apparel, prompting a short quick-time event as we wrestled over her wardrobe. While I was able to remove her skirt, I didn’t have the skill to pull off a double strip, which would have left my opponent in her undies.

Successive stripping attempts the protagonist or his stalwart supporting character and trips inside one of the game’s maid café’s revealed Undead & Undressed virtues. While the fighting wasn’t particularly noteworthy, resembling the type of fisticuffs provided by most brawlers in the last decade, the game’s commitment to fan-service is both conspicuous and contenting. Stateside gamers who always longed to have their fetish fantasies played out in a largely authentic setting will have their wishes answered when the title makes it way to the PlayStation and PS Vita before the end of the year. 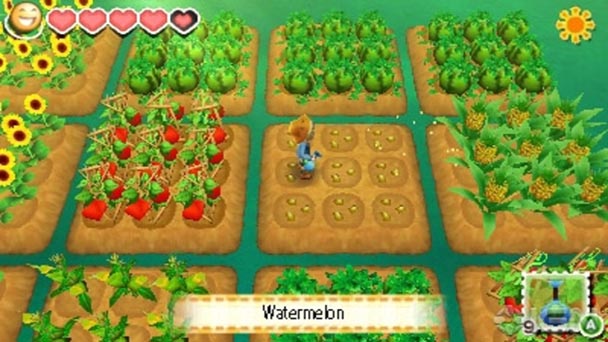 Less lascivious but no less indulging was XSEED’s Story of Seasons. Released in Japan as Bokujō Monogatari: Tsunagaru Shin Tenchi (Ranch Story: Connecting New Worlds), the third 3DS entry in the long-running franchise might lack the Harvest Moon moniker, but packs all the series customary amenities. As with most recent entries, players can elect to play as either a boy or girl, in an effort to build their agricultural fortune and even marry a prospective partner and have to two children.

Successive series entries have consistently streamlined play, while preserving the franchise mechanics, and Seasons is no different. Frazzled virtual farmers should appreciate the addition of being able to sow, seed, water, and harvest crops in 3 by 3 grids, instead of managing each spot of land by hand. Another new aspect is the ability to take home different types of animals by going to a safari, while trading posts allow for a simple way to sell your sundries, with in-game or worldwide through the game’s online transaction system. 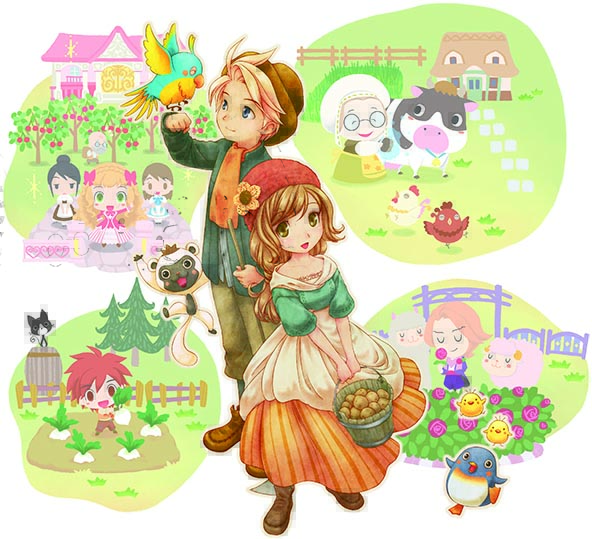 Although longtime franchise director Yoshifumi Hashimoto explained that Story of Seasons won’t upend Harvest Moon tenets, he did articulate a number of other critical changes. Jumping in now possible in the game’s world, making those knee-high barriers and squatty slopes much less prohibitive. Apparently, the Season’s realm will be more open-ended as well, with less restrictions on farming, allowing players to plant most any type of crop in an open field. To offset this increase in autonomy, rival NPC farmers will offer a competitive challenge, vying for agricultural yield at the game’s traditional festivals.

Having seen Story of Season’s approachable take on agrarianism, it was back to a bit of fan-service with a playthrough of Senran Kagura: Shinovi Versus, a title which demonstrated the PS Vita’s ability to model jiggle physics. Following XSEED’s release of Senran Kagura Burst (an eShop title which combined the original Senran Kagura along with its sequel), the follow-up shirks the two-dimensional brawling of the 3DS title for a deliberately Dynasty Warriors-like experience. Unsurprisingly, the exploding clothes and bouncing breasts remain untouched. 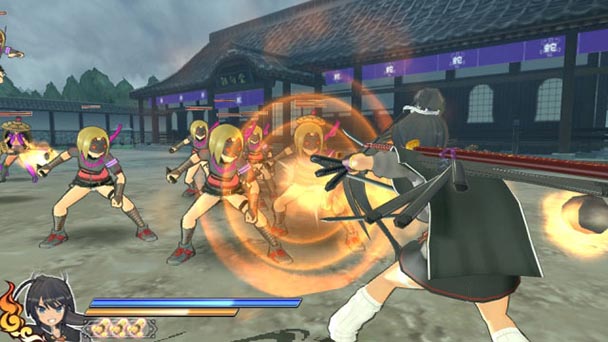 The premise has the Kunoichi of the Hanzō National Academy at odds with their avowed rivals from Hebijo Clandestine Girls’ Academy, but in the interest of time, the exhibitor skipped over the narrative setup to engage in a bit of heated garment shredding action. Thankfully, experience with the Omega Force-developed franchises paid off, with my strategy to whittle away at lesser opponents before taking on the larger aggressors receiving a sincere commendation. Within a few moments, I had had adapted to the game’s groove, using the set of weak and strong attack buttons to begin to ebb away on my opponents- and see the damage articulated as a dwindling set of clothes.

The game’s cutscenes, which offered a leering camera zoom on the jiggling anterior and posterior of characters received a large amount of attention from passing players. A number asked if there was any female-ninja nudity to which the rep explained that nipple tape and censor bars was as racy as Shinovi Versus got. Those passing by seemed less interested in the game’s other qualities- such as four-playing online multiplayer and a campaign which spans one hundred missions. 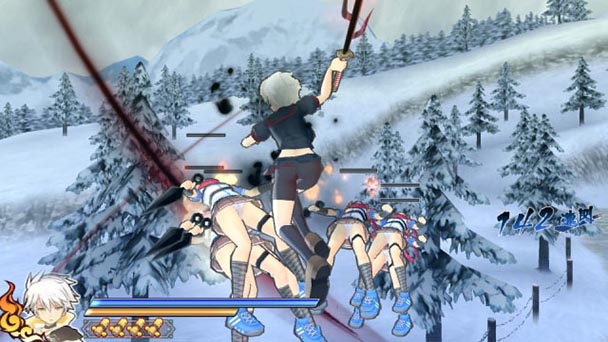