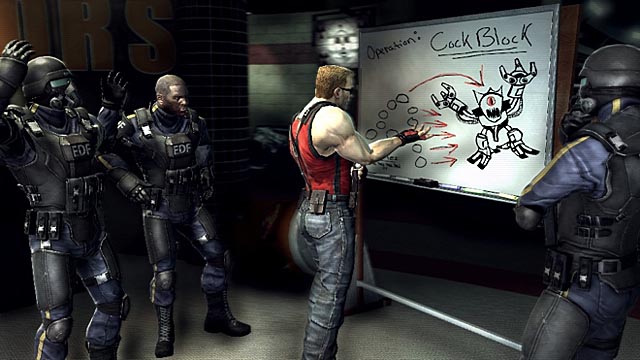 It’s been said that the best popular culture forms, rather that follows, the trends of an era. From the Beatle’s influence on rock music to Blade Runner‘s impact on science fiction, certain works can have a profound effect on the artistic landscape. While 1996’s Duke Nukem 3D wasn’t the first modern first-person shooter (credit 1992’s Wolfenstein 3D with that accomplishment), it was one of the first games to provide a memorable protagonist and a dose of irrelevancy to a genre steeped in seriousness.  With a barrage of foul mouthed quotes, Duke transformed the mundane gun-clenching hand of FPS’s  into a personality-driven title, displaying a defiant middle finger to all contemporaries.

Fourteen years later, Duke’s still flipping the bird. Yet, where the character once channeled a rebellious vibe, now the action star seems like a cranky holdover from the Clinton years. With targets which range from Halo‘s Master Chief (“Power armor is for pussies!”) to a decapitated Isaac Clark lookalike (“That’s one dead space marine”) Duke Nukem Forever is the interactive equivalent of a disposable parody like The 41-Year-Old Virgin Who Knocked Up Sarah Marshall and Felt Superbad About It. As long as players aren’t concerned with the game’s aesthetics, Forever is capable of generating a few sophomoric laughs. Most modern gamers will probably crave something more fresh and substantive. 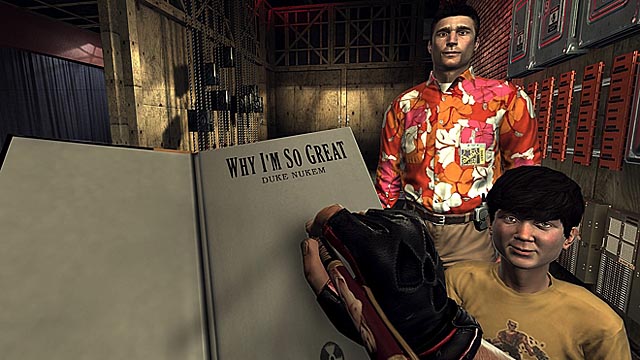 The game commences with players staring at a urinal. A pull of the right trigger releases a stream of urine, with the rivulet exhibiting elementary liquid physics. The sequence indicates just one of Forever‘s missed opportunities;  while there’s a pleasing procession of interactive objects, ranging from pinball machines, toilets, pool tables, and cigarette machines, few of them are very interesting. When an eager, young admirer asks Duke for an autograph, gamers are given the opportunity to create a message as sincere or salacious as they desire. Yet once players scrawl a simple message, awkwardly using the analog stick as a writing tool, the results are always the same- a vague,  pre-canned message from the game. A more pleasing solution would have incorporated a simple text-based interface, embedding the youngster with a range of responses which might have encouraged multiple interactions. As such, Duke Nukem 3D‘s gratifying experimentation has been excised, meaning gamers will no longer enjoy the satisfaction of discovering a health-replenishing fountain which erupts from a pipe-bombed toilet.

Unfortunately, the game’s main focus- gunning down a succession of foes, fairs similarly. Shirking most of the FPS developments of the last decade (admittedly, Duke’s vulnerable ego mimics Master Chief’s rechargeable shield) Forever lacks things like adaptive enemy AI, appendage-based damage, or just plain finesse. Between the title’s failure to place more than a few foes on-screen at once and its inability to maintain a steady framerate once heavier weapons are employed, eliminating antagonists feels unsophisticated. Even when the game hopes to distract audiences with devices like RC car driving bits, an underwater sequence, platforming, and puzzles, few of these elements ever fully connect. Sure, Duke’s miniature dune buggy handles acceptably, but the stage’s recycling of assets and vaguely articulated waypoints is assured to perplex players. While the title’s physics-based conundrums recall some Half-Life 2‘s more cerebral moments, they contradict and slow Duke’s lascivious antics. One bright spot are some of the game’s bosses, which occasionally require more to dispatch than just a heavy trigger finger. 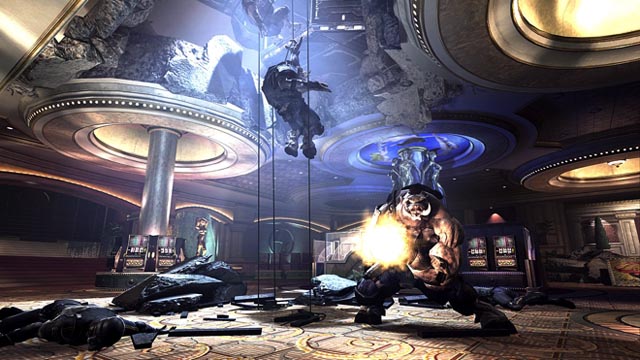 Beyond Forever’s campaign, there’s also a quartet of multiplayer variants for players. All the requisite competitive modes- Deathmatch, Team Deathmatch, Capture the Flag King of the Hill, make an appearance, with a number of maps revisiting beloved Duke locales. Yet, like the title’s single player component, Forever lacks the nuance and sophistication to hold its own against most modern competitors- even if the game’s emphasis on trap-laying still retains a bit of malicious amusement.

After a fourteen year delay, Duke has finally escaped hiatus hell, ready to take on brutal boars and critics alike. Regretfully, the once celebrated action star seems to have squandered his downtime, offering a title which lacks the firepower and finesse to vie against most modern shooters. As such, Duke Nukem Forever relies on wit rather than weapons to make his way through to the final credits; a telltale sign of a hero whose best years have passed. 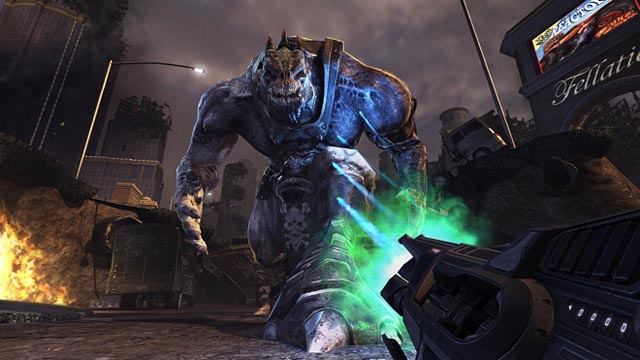