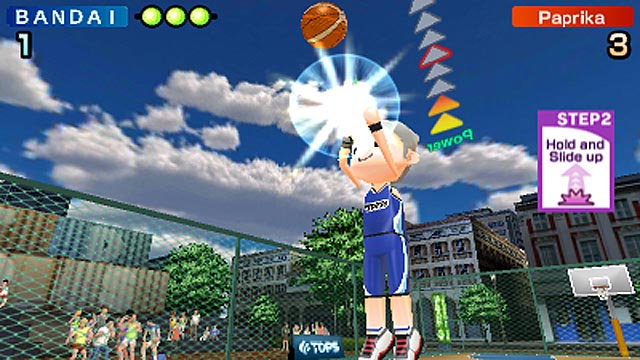 In theory, the main mechanic of recent 3DS release DualPenSports sounds problematic. While holding a stylus in each hand, players participate in seven athletic-oriented mini-games and three ambidexterity challenging ‘tap exercises’. Since the customary style of playing a 3DS game involves utilizing a free hand to hold the system, it means DualPen is constrained  to tabletable or lap play, at least until Metroid Prime: Hunters’ thumb straps make an unlikely resurgence. In execution, I was able to play the game with the hardware resting on my thighs, although soreness did creep in after an hour of continual neck craning.

Additionally, the title compels owners to carry additional hardware with them.  The game ships with two chucky, plastic styluses- even if players use the 3DS’s own telescoping tool, they’ll still need one at least one additional implement. Yet, As long as gamers can overlook these prerequisites, DualPenSports’ decathlon of diversions offer a surprisingly enduring, gratifying and attractive package for gamers. 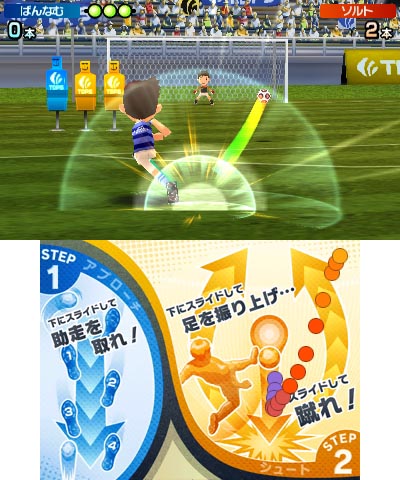 Some screenshots from Japanese version of DualPenSports

Each of the game’s sports competitions boast two main variations. There’s a Rank Match which pits players against a endless succession of CPU competitors and Score Match, where the additional elements are introduced to each pastime, as players battle for a spot on the cartridge’s leaderboards. Both modes feed into a player’s Athli score, which continually tracks a gamer’s progress, adding points with each victorious effort.

Borrowing from WiiSports design, Baseball presents a parade of Mii-looking rivals, tasking gamers with besting their records. Score Match dispenses with the opposition, pitting the players against a field overlaid with a rotating set of scoring regions across the outfield and stands. Boiling the game down to a pitcher-batter confrontation, players use their left stylus to draw a vertical line representing their backswing, while a stylus sweep with their right hand influences the trajectory of the ball. As with every other recreation in DualPenSports, timing is essential-  with Baseball participants drawing lines in tempo with both the pitcher’s release and as the ball cross over the plate. 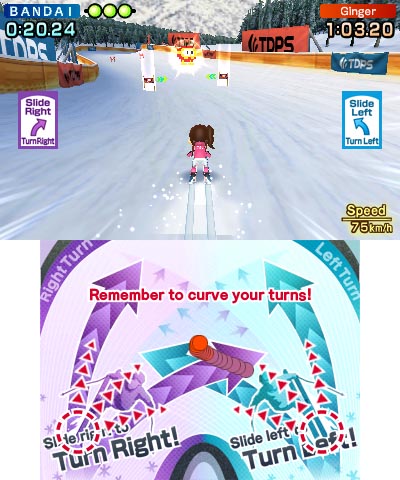 While Skiing’s also requires careful cadence as players twist their way through a serpentine selection of slaloms, controlling your athlete is handled differently. Here, player draw arcs with their two styluses to turn the skier, while an alternating series on each side of the touchscreen initiates a speed burst. Since the 3DS lacks multitouch capability, players have to lift one stylus off the screen while creating the other, simulating the precarious poise of an actual racer. This becomes unusually important in Boxing, when sweeps on each side of the touchscreen are translated into two handed hooks, jabs, and body blows. Meanwhile, Paragliding employs a similar mechanic to Skiing, with players touching either side of the touchsceen to influence the direction of their player, as they collect shifting gems which float in the atmosphere.

While nearly every entry in DualPenSports athletics are enjoyable, many succumb to an unexpected difficultly spike. While Basketball’s key shots are aptly effortless, shooting from the three point line is disproportionally tough; the same thing happens when Baseball’s flow of fastballs is broken by the first unexpected knuckler. Still, a bit of player perseverance should allow owners to predict the title’s irritation inducers. On the flip side of things, the title’s three Brain Age-esque diversions dish out activities such as tracing over dots or tapping flashing squares, alternatively using each hand. Yet, without any kind of long term monitoring, it’s hard to know if players are actually improving their ambidextrous skills. Moreover, I would have liked to have compared my own score with 3DS friends or worldwide rankings.  Regretfully, no StreetPass or online functionality exists. 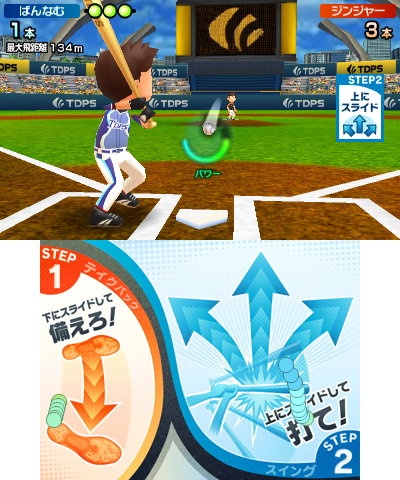 Aesthetically, DualPenSports recalls the vibrant colors, buoyant melodies, and charming avatars of Nintendo’s WiiSports series. Both the game’s environments and characters are articulated with a capable amount of textural detail, and move at a steady framerate, even with the 3D slider moved to the max. The title’s three-dimensional effects are competently delivered, with the cartridges’s Archery and Skiing events showing a pleasing sense of depth.

With a unwieldy play style, DualPenSports doesn’t come recommended to commute-time competitors hoping for straightforward, on-the-go gratification. Instead this minigame collection is for the constituency who plays their 3DS when the television or computer is occupied. If you can abide by DualPenSports demands, this compilation of ten diversions deserves a spot in most burgeoning libraries.

Previous: New Releases for the Week of June 26th, 2011
Next: Wipeout: In the Zone Review