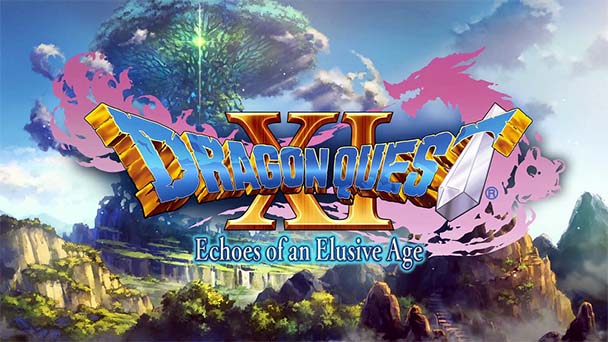 Ideally, we’d receive new mainline entries in the Dragon Quest franchise every few years. The property has one of the richest legacies in console role-playing, with the original NES game laying down a foundation for console adventures that would remain relevant three decades later. Credit, of course, must be given to Dragon Quest’s creator Yuji Horii, who has painstakingly designed and scripted the plotline for each principal entry. But the balance between upholding tradition and injecting innovation frequently proves difficult for the genre. However, Horii has consistently managed the tension adeptly, and with the release of Dragon Quest XI: Echoes of an Elusive Age, he dexterously bridges the familiar and the fresh.

With eight years since the last main franchise entry, Dragon Quest IX: Sentinels of the Starry Skies for the Nintendo DS, Elusive Age propels the property into the high-definition era. Built on the fourth iteration of the Unreal Engine, the PlayStation 4 and PC versions (there’s also a Japan-only 3DS version and a Switch version coming not so soon), set a new benchmark for how contemporary role-playing games should look. 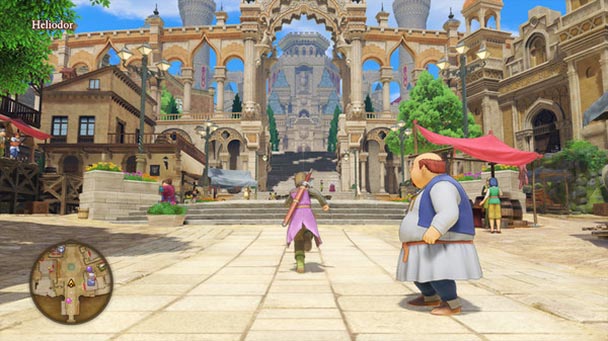 Famed artist Akira Toriyama’s cell-shaded designs resemble Dragon Ball moved to a Feudal European setting, extending a cast of clean-faced characters. Naturally, the game’s bestiary is brimming with playfulness, whether it’s seeing old favorites like slimes rendered in polygonal form or enjoying the imaginative new creations. Sure, there’s a bit of palette swapping to pad the ranks, but even then, Elusive Age endows its deviations with distinct abilities. For many, the game’s gorgeous backdrops will solidify a sense of satisfaction, with long draw distances and intricate details that bring the game’s vibrant world to life. Pleasingly, the PC port is proficient, with sixty frame-per-second output provided you have the equivalent of GTX 1060 GPU.

Exploring the realm of Erdrea will reveal of few of Dragon Quest XI’s shrewd modernizations. Immediately, you’ll be prompted to press a button to auto-walk, which is the game’s version of cruise control. Here, the main character strolls at a steady pace, with players only needing to make adjustments to his trajectory. Soon, you be able to call your faithful stead, who gallops over the scenery and foes with enthusiastic haste- but not so fast that you’ll miss the myriad of nooks that almost always hide worthwhile rewards. Later, you’ll be able to employ a Zoom spell to fast-travel through the realm. Like many of Elusive Age’s component’s movement has been carefully considered, helping offset fatigue as you roam across the game’s sizable domain. 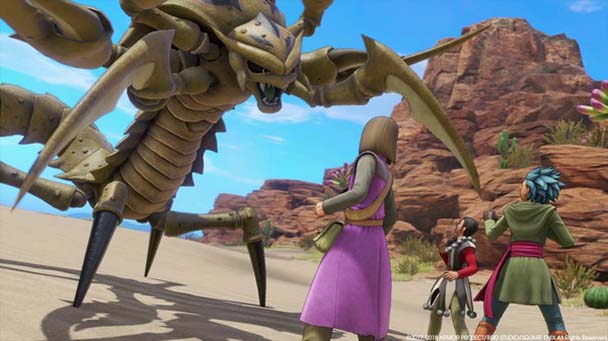 Save for some random aquatic-based encounters, Dragon Quest XI consistently foreshadows combat. As you move through the world, you’ll spot foes loitering in the environment. In keeping with custom, you can sneak up on unsuspecting enemies and strike to acquire initiative. But you can also evade most of the game’s adversaries, if you feel you have the potency to confront the next boss. This kind of autonomy will be appreciated anyone who has tried to venture forward, only to be bothered by successions of trash mobs. Cleverly, subordinate opponents will even scurry get out of your way, which can you make you feel like a hardened badass.

Expectedly, when you do enter turn-based battles, you’ll have control over nearly element. From melee attacks, magic spells, to healing, all the requisite role-playing options are at your disposal, as you select from different menu options. While the mechanics lean toward tradition, that doesn’t mean Dragon Quest XI doesn’t keep things interesting. Once you’ve been acquainted with the rudiments, the game gently ramps up the difficulty, making encounters persistently engaging. 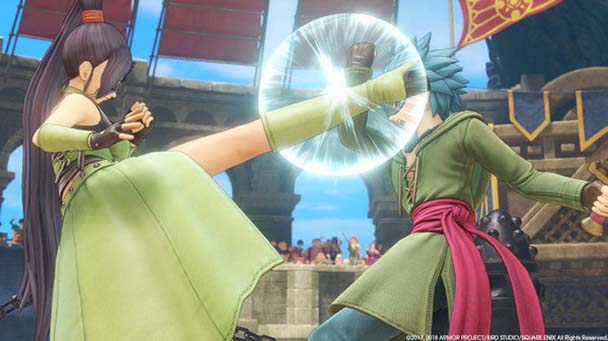 Echoes of an Elusive Age also lets players coach their comrades, choosing different behaviors for party members, as you watch from the sidelines. Here, you set parameters for characters, dictating policies like the amount of magic use, healing, and the like. As soon as things appear to be going south, you can immediately resume control, micromanaging your party to victory. Opt for CPU-controlled combat and you can even play armchair cinematographer, shifting the camera around to crane the most picturesque view of the clash. Don’t worry about positioning, Elusive Age seems more concerned with striking a good pose rather than getting caught up in the effectiveness of unit placement.

Beyond keeping an eye on buffs and debuffs, you’ll also want to watch when characters get Pepped up. Take enough damage, and you’ll shift to a state that gives a hearty stat boost. Alternatively, you can opt to trigger your Pep Powers, which opens up the ability to use even more powerful skills and perks. When it’s time to really bring the punishment, you can simultaneously pep up several characters, recalling the synergy of Chrono Trigger’s Combo Techs. But you’ll have to be careful, because foes have the same ability set, which helps to keep combat lively. 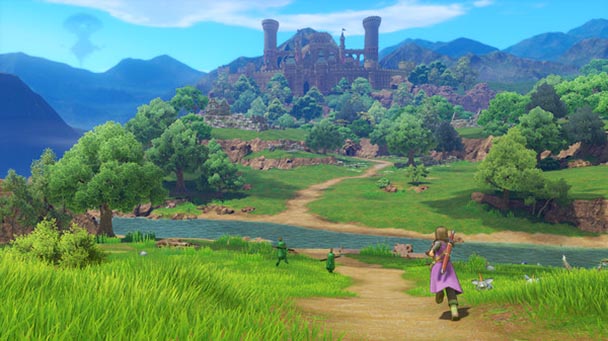 As you persevere, you’ll visit the hex-based Character Builder, where you’ll use skill points to unlock new perks and abilities. Gratifyingly, the game extends a lot of autonomy, which your party has is built around basic fantasy class types, Elusive Age allows for either concentration or generalization. Naturally, you can pay a bit of coin to rebuild a problematic party member, so you’ll feel free to experiment. There’s also a lot of freedom built into the game’s crafting system. Players can choose to manufacture equipment using found material in the game’s increasingly complex forging mini-game. Or if they rather just focus on the adventure, it’s possible to buy respectable goods from town vendors.

Cities in role-playing games are often uninspired locales, insipid places where NPCs extend exposition and merchants vend generic stat upgrades. But Dragon Quest XI’s municipalities are consistently delightful. Much of the satisfaction comes from the distinction of each settlement, which display different aesthetics, speaking accents, and even attitudes. Much like the Kiseki games, revisiting hamlets often exposes new dialog, simulating the passage of time and character development. Largely, Elusive Age harks back to an era when town exploration felt exciting and didn’t seem like a chore. If you’re like me you’ll wall in love with a town where the citizens speak in haiku. 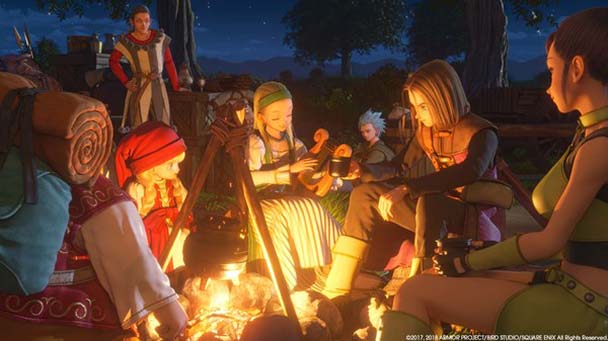 Similarly, the game’s plot recalls the golden age of fated heroes, albeit with the occasional concession to more modern narrative. Growing up in a quint village known as Cobblestone, the game begins as the protagonist embarks on a coming-of-age excursion. Upon reaching the end of the gauntlet, a giant bird attacks. The ambush would probably be fetal, but a tattoo-like mark on his hand glows brightly, triggering a bolt of lightning and ensuring the hero’s safety. The event substantiates what many have suspected, that the protagonist is the prophesized Luminary, a figure destined to confront evil forces.

Like most entries in the franchise, Dragon Quest XI habitually oozes fairy tale-like charm. But it’s also willing to occasionally venture into darker territory, as well as toss the unexpected plot twist at players. Much of the appeal stems from the game’s charismatic cast, who display a heartwarming sense of camaraderie. RPGs often have one lead character who is a bit of killjoy, but here they’re all likable, which is important as you’ll likely spend seventy+ hours with them. Agreeably, there’s a healthy amount of post-game content, bolstering the cost to content ratio even further. 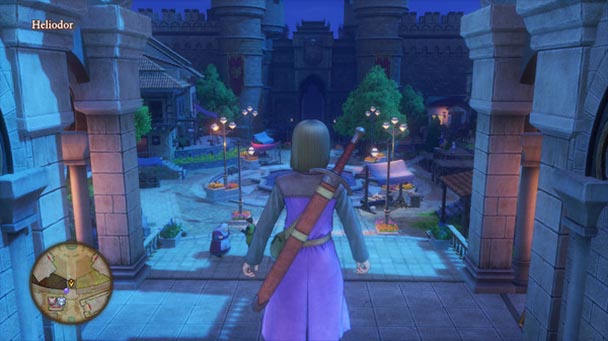 Like any ambitious effort there are a few issues. Longtime Dragon Quest composer Koichi Sugiyama offers up a number of quality works, but their synthesized rather than orchestral delivery, diminishes their impact. The game’s new English voiceover is competent, but undoubtedly, Japanese dialog would have delighted the property’s most ardent fans. Perplexingly, some common names are excluded from the main hero naming process.

But largely, these blemishes are all forgivable, especially when measured against the game’s abundant merits. Dragon Quest XI: Echoes of an Elusive Age is a game that straddles both past and present, feeding a hunger for classic role-playing elements while offering modern amenities. In Japan, Dragon Quest is a phenomenon, with each new entry bordering on national event. With Elusive Age, it’s easy to see why the property is beloved, and quite possibly, we’ll see a similar reaction on this side of the Pacific.

Dragon Quest XI: Echoes of an Elusive Age was played
on PC with review code provided by the publisher.

Dragon Quest XI: Echoes of an Elusive Age review
Ideally, we&rsquo;d receive new mainline entries in the Dragon Quest franchise every few years. The property has one of the richest legacies in console role-playing, with the original NES game laying down a foundation for console adventures that would remain relevant three decades later. Credit, of course, must be given to Dragon Quest&rsquo;s creator Yuji Horii, who has painstakingly designed and scripted the plotline for each principal entry. But the balance between upholding tradition and injecting innovation frequently proves difficult for the genre. However, Horii has consistently managed the tension adeptly, and with the release of Dragon Quest XI: Echoes&hellip;

Summary : Dragon Quest XI: Echoes of an Elusive Age showcases many of the role-playing tenets the franchise popularized three decades ago, as a prophesized protagonist follows his destiny. Gratifyingly, an assortment of largely noncompulsory modernizations ensures that the game isn’t stuck in yesteryear.