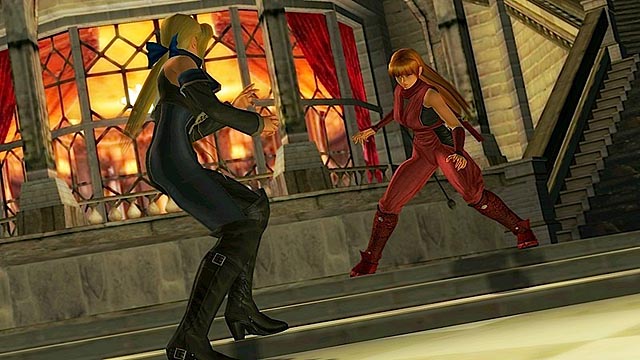 DesertEagle’s Take: Although the Nintendo 3DS has struggled to find mainstream acceptance, there’s one audience the hardware has the potential to please: fighting-game games.  With three separate genre entries due to be  released during the hardware’s launch window, pugilistic-minded players will be able to get their kicks (and punches) on the road. Like inaugural title Super Street Fighter IV 3D Edition, recent release Dead or Alive Dimensions does an commendable job of transforming the series’ hyperkinetic action onto portable screens.

At the title’s heart is Chronicle, an ambitious story mode which attempts to consolidate the winding plotline of the first four Dead or Alive games into one tidy narrative. Blending cutscenes,  full motion video, model poses, pop-up factoids, with an interactive fighting primer, the storyline might be incomprehensible to all but the fervent Team NINJA fans. Yet, gamers who relinquish themselves to the yarn of possessed protagonists and  motionless ninja dioramas will be given enough tutelage so they don’t embarrass themselves in Dimensions‘ online area. Smartly, the cartridge uses the 3DS’s bottom screen to display a list of combos, even allowing players to initiate commands with a stylus tap- a functionality which carries over to the game’s other modes. While some may bemoan Chronicle’s non-adjustable, relaxed challenge level, I found it refreshing to not face a ridiculously overpowered boss in a single-player fighting arena. 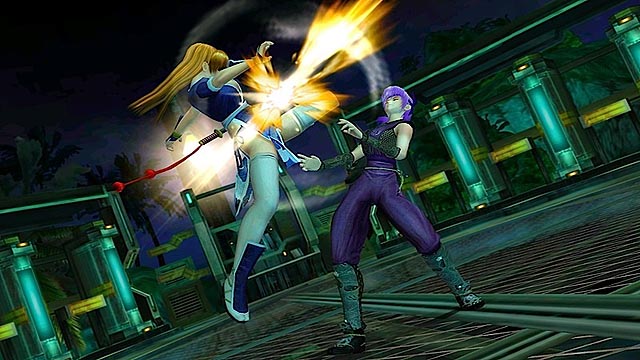 Beyond Chronicle mode, the developers have shoehorned a surprising amount of content into Dimensions. There’s the requisite free play, survival and arcade variations, with the latter having a variety of prearranged courses challenging players to beat their completion times. Although Tag Challenge seems like a admirable addition, have CPU assistants initiate their own entrances and exits can spoil a competition’s cadence. Cleverly, Team Ninja has employed available 3DS functionality into Dimensions, using the gyroscope to alter perspective on stages and the 1,000 collectable figurines, StreetPass to swap ghost data, and SpotPass to automatically download new costumes for the game’s 26 character roster.

Despite Dead or Alive Dimensions kitchen-sink aspirations, a few components don’t quite deliver. While online matches were functional (and matchmaking was amazingly effortless- even telling players the number of friends which are currently online), competitions succumbed to sporadic moments of lag. While the game’s four button strikes easily translate to the 3DS’s hardware, the title’s accompanying  diagonal movements proved awkward on both the circle and directional pads. Still, neither of the these flaws are enough to dissuade fighting fans from adding the title to their collection; between the cornucopia of content and the refined fisticuffs, Dimensions is an easy 3DS game to recommend. 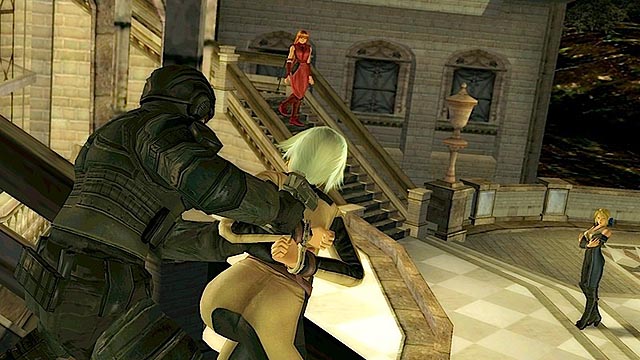 BlueSwim’s Take: The Dead Or Alive series is a system-selling (or, in the case of DOA3 on the Original Xbox, system-saving) franchise for me. I bought an Xbox 360 at launch solely for DOA4. The same goes for the 3DS and Dead Or Alive: Dimensions. What’s different this time is that during the five years between DOA fighting games, the Master Ninja of Team NINJA and DOA creator, Tomonobu Itagaki, parted ways with the developer. This departure was, in my eyes, not one for the better. When Itagaki changed something, he usually had good reason to. This just isn’t the feeling I get from some of the changes that Yosuke Hayashi, the new Master Ninja of Team NINJA, made in Dead Or Alive: Dimensions. The Arcade and Time Attack Modes have been combined to create a course challenge mode that is no longer randomly generated and the Tag Team Mode went from being a solid and enjoyable 2-on-2 affair to a frustrating 1P + CPU Challenge Mode that you probably won’t ever touch again once you’re done unlocking the game’s boss characters. However, don’t write-off Dimensions as a bad game quite yet.

If you’ve played a DOA game in the last decade, you know what to expect from Dimensions. With a few balancing and mechanics tweaks in tow and A.I. that’s much more forgiving than DOA4‘s, the core Dead Or Alive gameplay has successfully made the jump to the 3DS. One of said tweaks was to the counter system. Introduced in DOA: Ultimate, the “four-point counter system” which required pressing forward + Free to block mid-level kicks (in addition to Free + back low, mid, or high for other strikes), has been scrapped in favor of DOA’s traditional (and much easier) “three-point counter system” which only requires pressing back (low, mid, or high) + Free. DOA4 upped the pace of fights, yet still used the four-point counter system which was designed for the slightly slower DOA: Ultimate. Since Dimensions keeps DOA4‘s pacing, reverting back to the easier counter system was absolutely the right call to make. This is what DOA4‘s countering should have been like. Another change made to the gameplay that is just as big, but to the detriment of the game’s balance was the inclusion of projectile moves for certain fighters as they can and will be spammed to an annoying, Super Street Fighter IV: 3D Edition Lite Mode Guile, level when you play online. 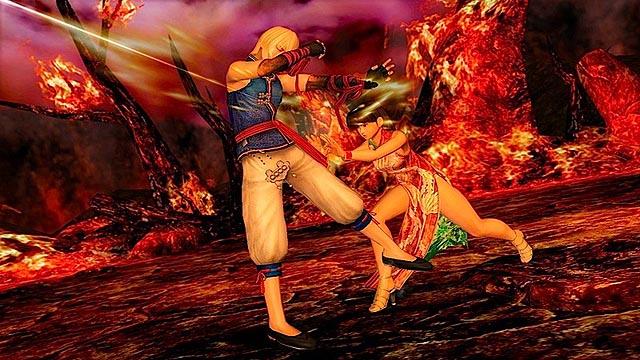 Being a compilation of the four previous Dead Or Alive games, there is a large amount of recycled content. A fair portion of Dimensions‘ meager costume wardrobe is rehashed and almost the entire stage roster hails from other DOA games. Some old stages do feature changes ranging from portions of the stage now being partitioned off to brand new sections where walls used to be. The music is a mix of old and new. Aerosmith’s tunes, however, didn’t make the cut, an omission that hurts some of the CG cutscenes. I also found the audio mixing in general to be lacking. The explosion sound effect when an opponent hits one of the walls of the “Danger Zone” stage cuts through my ears. When I turned the volume down to the point where it wouldn’t, I could hardly hear the music or make out what the characters were saying.

Even with the complaints and nit-picks I’ve had with it, Dimensions is easily one of the best 3DS games you can get. If you’ve ever liked the series, odds are that you’ll like DOA:D, too. For new players to the series, I am hesitant to recommend Dimensions over the “total package” of DOA games, the Original Xbox classic, DOA: Ultimate. If you have a backwards-compatible Xbox 360, the money used for Dimensions would be better spent on a used copy on Ultimate instead. If that isn’t an option or you’re just looking for a good, new 3DS game, Dead Or Alive: Dimensions is a perfectly fine purchase. The core gameplay is still a blast to play and the amount of modes and unlockable content far surpasses that of Super Street Fighter IV: 3D Edition. I’m not going to be taking this one out my 3DS anytime soon. 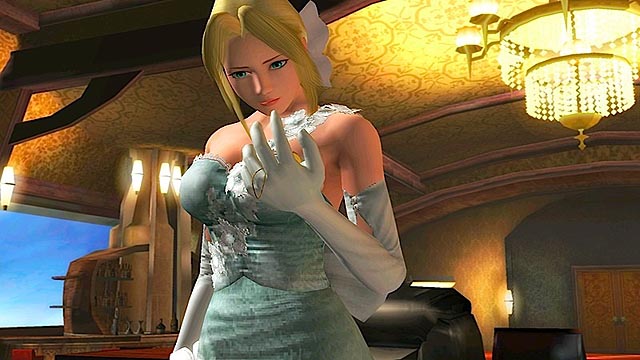 BlueSwim is a 19-year veteran of video games. A fan of everything from Super Mario World to Earth Defense Force 2017 to Fire Pro Wrestling, his motto is simple, ‘if it’s good, I want to play it’. He grew up spending his Saturdays doing 12 hour marathon gaming sessions playing the likes of Star Fox 64, The Legend of Zelda: Ocarina of Time, and Mischief Makers. Launched in 2008, his “Palm Tree Beach” blog on CheapAssGamer has had almost 100,000 views. He regularly interacts with members of the gaming community over Twitter. He is also one of the only people in the world to have played Hell’s Bells by AC/DC on the drums in Rock Band with a cat sleeping on his lap.