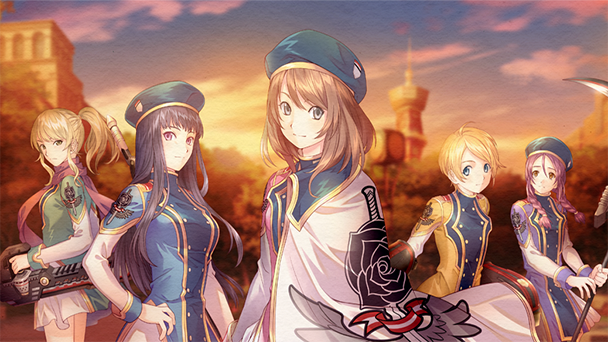 Sporadically, a team of renowned developers unite, and the results are splendidly synergistic. Largely, that’s the case with the PlayStation 4 release of Dark Rose Valkyrie. As a title that brings together scenario writer Takumi Miyajima, character artist Kosuke Fujishima, (both worked on the Tales series) along with the Compile Heart staff, Dark Rose Valkyrie can be a peculiar concoction- balancing the earnestness of the Bandai Namco franchise with the customary Compile Heart sexiness. But save for a few issues, it’s also one of the Shibuya-based developers better efforts, elevated by a captivating cast and an intricate battle system.

Destined for comparison with Resistance’s plotline, Dark Rose Valkyrie also focuses on an epidemic known as the Chimera virus, an isolationist country, and a context established in an imagined fork of history. Yet, where Insomniac’s third-person shooter adopted an alternative Cold War setting, Valkyrie is set in 1929- offering a vaguely symbolic interpretation of Japan on the verge of Great Depression. 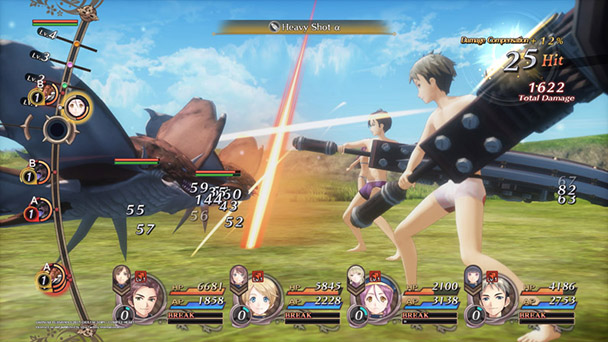 Rather than economic policy, it’s a meteorite known as the Black Garnet that’s the impetus for harm, with the object generating an epidemic that’s killed three percent of the world’s population. Reacting to the outbreak, the Shin Yamato Empire has closed its borders, and established a dedicated agency known as ACID (Anti-Chimera Interception Division) to combat the outbreak and protect the populace. Players assume the role of Asahi Shiramine, a rookie captain from the rural outskirts who has been reassigned to the capital to lead Special Force Valkyrie, one of ACID’s most elite squads.

As an outsider, Shiramine’s past successes are devalued as “beginner’s luck”, by some members of the existing team, prodding the protagonist to prove himself. Typically, when games depict introductions with other characters the sequence can be tedious. But Valkyrie signals some of its intriguing backstories that lurk beneath the anime-based architypes, delivering a cast worthy of caring about. 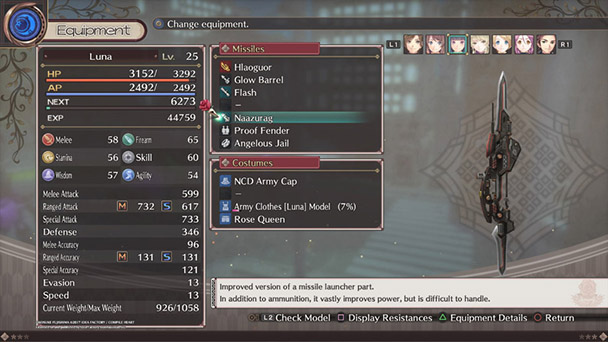 Leading a para-military team, cohesion is one of the title’s main themes, reflecting in both story and conflict. Spending time with members of your predominantly female team unsurprisingly cultivates these sentiments. As each discloses their past, viewpoint, and attitude toward the conflict, Valkyrie simulates rapport just as good as any role-playing game; it would be difficult to develop some kind of para-social relationships with a few teammates. But then, Valkyrie throws a curveball at players, with the warning that one member is a traitor, secretly working to perpetuate the plague for malevolent reasons.

Periodically, players have the opportunity to perform some Phoenix Wright-style sleuthing, interesting members and looking for inconsistently in their testimony. Pleasingly, few elements endow investigation with nuance. First, they are rather open-ended in nature, allowing for players to cross-examine a single person or interview multiple members. Either technique can be used to seek out the turncoat. There’s also complexity rooted in the TCS weapons the team uses, which have a tendency to produce split personalities in individuals. Then, there’s Dark Rose Valkyrie’s randomization of its conspirator, ensuring replay and a spoiler-free experience. Perhaps, the traitor is based on answers to conversation responses, which would explain why I’ve fallen for a different defector during each playthrough. Then again, maybe it’s sheer luck. 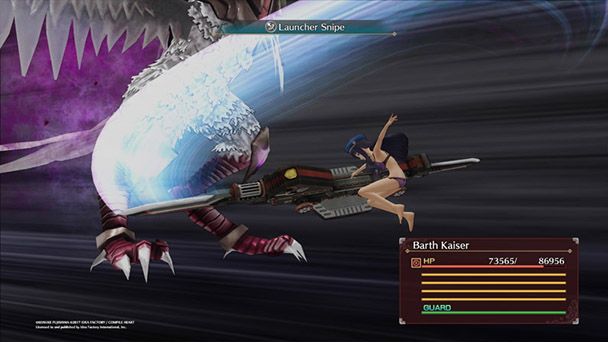 When you do suss out the saboteur, Dark Rose Valkyrie provides an ethical impasse that’s arguably worth the price of admission. Beyond the obvious branch of decision, there’s a third particularly devious option that certainly won’t get you to the game’s true ending, but is alarmingly wicked. My heart wouldn’t let me take the plunge, but I admire any player who could. For those who are obsessed with Valkyrie’s canonical conclusion, be prepared to put some time in.  Essentially, you’ll have to play the game at least twice, with a subsequent playthrough on a higher difficulty level, and quite possibly a FAQ in hand, which might be off-putting to some.

Esprit de corps is evident in the game’s battle system, which might draw comparison to Grandia. At the heart of the system is the Tactical Wait Gauge, an arced meter that charts enemy and ally turn order. But unlike the rigid turn orders of most role-playing games, Valkyrie is remarkably dynamic, with icons influenced by character speed, the type of strike, and the time it takes to charge an attack. Unsurprisingly, not only will you want to sync attacks to maximize efficiency, but well-timed attacks can make enemies miss their turn, pushing a party toward producing a guard break. Later, complexity arises in the form of targeted body parts, and a form of elemental strengths and weaknesses, insuring that players can’t idly power their way through the game’s encounters. Most role-playing veterans should appreciate the game’s combat, as there’s enough strategy and minutia to keep things interesting through the sixty-hour trek. Likely, there will be some that bemoan the inability to attack the back row until area-of-effect skills are boosted. 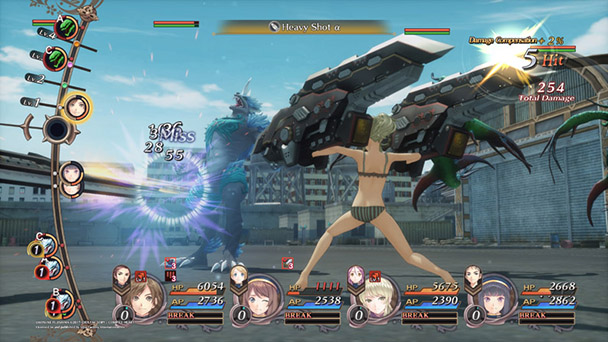 And yes, there’s the obligatory Compile Heart fan-service. Gradually combat wears down your armor, and when a statistical quota is exceeded, clothes the comes off, ultimately leaving your team fighting in their underwear. Since repair is expensive and the amount of protection by clothes isn’t monumental, there’s the urge to shirk modesty when fighting lesser monsters. When you do confront Dark Rose Valkyrie’s bosses, you’ll want to make sure your battle dress is undamaged, however. It should be noted that the game’s an equal-opportunity offender, with both males and females forces to fight in their skivvies.

Unfortunately, there are a few issues that can make Dark Rose’s journey a little prickly.  Even if you’re accustomed to Compile Heart’s tutorial screens, the sheer amount of early hour info-dumped can be debilitating. While it’s commendable that the developers want to welcome newcomers, the constant interruptions spoil Valkyrie’s first few hours. Other will take issue with the game’s composition, with an overworld that can feel underutilized, and a mission structure that can paint players in a corner. Aesthetically, Fujishima’s character designs are alluring and environments often convey sentiment, but sporadically milieus can feel woefully empty, which seems to be a reoccurring issue with Compile Heart. 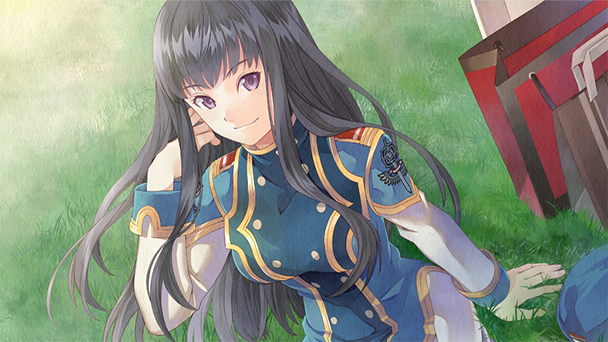 Dark Rose Valkyrie is the infrequent role-playing game that takes chances. Where most entries in the genre might present an eleventh-hour character turn, Compile Heart’s latest spurs suspicion with its entire cast. It’s a risk that could have easily weakened the plotline, with players refusing to build bonds with any potential conspirator. But somehow, it works, elevating Valkyrie past contemporaries eager to play it safe. If you can consciously fall for a schemer, then by all means you can develop a fondness for a game with a few niggling blemishes.

Dark Rose Valkyrie was played on the PlayStation 4
with review code provided by the publisher.

Dark Rose Valkyrie
Platform: PlayStation 4
Developer: Compile Heart
Publisher: Idea Factory International
Release date: June 6th, 2017
Launch Price: $59.99 via retail or PSN
Dark Rose Valkyrie review
Sporadically, a team of renowned developers unite, and the results are splendidly synergistic. Largely, that&rsquo;s the case with the PlayStation 4 release of Dark Rose Valkyrie. As a title that brings together scenario writer Takumi Miyajima, character artist Kosuke Fujishima, (both worked on the Tales series) along with the Compile Heart staff, Dark Rose Valkyrie can be a peculiar concoction- balancing the earnestness of the Bandai Namco franchise with the customary Compile Heart sexiness. But save for a few issues, it&rsquo;s also one of the Shibuya-based developers better efforts, elevated by a captivating cast and an intricate battle system. Destined&hellip;