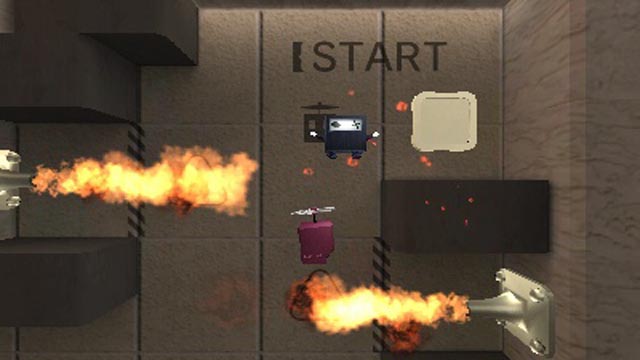 Typically, shinobi are portrayed as agile, fast, and resilient.  Cubic Ninja’s sole gag is that its main character has none of these attributes; the dice-shaped hero moves clumsily, leisurely, and is susceptible to the slightest graze with an enemy or hostile object. Using the system’s gyroscopic sensors, the game’s default control scheme has players rotating and tilting their 3DS in an effort to help the awkward assassin reach the exit in each of the game’s hundred levels. Disappointingly, this ninja succumbs not at the blade of an insurmountable foe, but rather from a discouraging lack of depth and a deficit of polish.

Certainly, using motion control to guide the hero through each labyrinthine stage is a capable concept; countless iPhone apps have used the same mechanic. Yet, troubles arise when your Ninja is required to move to either the distant foreground or backdrop. Moving the protagonist along with z-axis is initiated by tilting the portable toward or away- obscuring the player’s perspective on the action. Additionally, moving the 3DS outside of its optimal viewing angle has the tendency to ruin Cubic Ninja‘s 3D effect (early reports of the title being a wholly 2D experience are false). Although players can abandon the game’s default control scheme to control the ninja with the circle pad, this method comes with its own quirks- movement along the depth plane becomes cumbersome when the protagonist brushes against a floor panel. 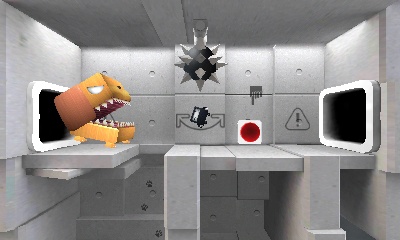 While Cubic Ninja isn’t completely defenseless, his arsenal is woefully underutilized. A tap on the bottom screen can initiate shrinking or send out a shower of shuriken, but these abilities are drastically limit in their usage. While each of the five main worlds deliver different themes and evoke an interesting Portal-esque minimalism, they are punctuated by simplistic bosses, whose move in obvious patterns. Dispatching one of the baddies delivers the game’s best visual effect, where the trumped foe is thrown toward the player, creating a simulated glass-shattering effect.

Thankfully, the title escalates its level of challenge at a leisurely rate; most players will surmount the first forty stages without much effort. Gradually, new objects are introduced to the gamers, from button switches which move around pieces of the environment, fans that push the ninja away, to wrecking balls capable of breaking through barriers. Enemies for the most part are gratifyingly inoffensive, rarely chasing the player down, and are mostly a mobile obstruction. The painful problem with the game’s design is that beyond the inclusion of new objects, Cubic Ninja’s mechanics remain constant. Each non-boss stage requires gamers to navigate their way to the exit; inducing fatigue long before the cartridge’s halfway point. Even additions like unlockable protagonists, Time Attack and a Survival Mode do little to bolster the game’s constricted scope. 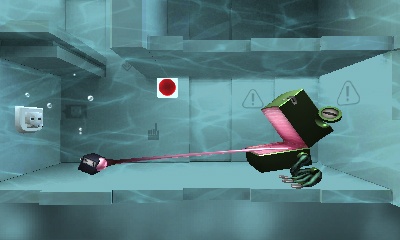 As players conquer levels, they’ll unlock pieces for use in Cubic Ninja’s saving grace- its level editor. While the interface is a bit unintuitive, the title’s construction set allows players to create levels which rival the complexity and capability of the developers’ own stages. Budding designers can place switches, start and stop points, antagonists, and hazards- easily testing out their custom stages with a few stylus taps. Once a level is completed, it can be saved on the cartridge, or transformed into a QR code ready for sharing. Hopefully, a site will spring up which showcases the best user-generated stages.

In Japan, Cubic Ninja was released at a discounted price. With its simplistic play mechanic, it would be much easier to recommend the title as a twenty dollar pickup, rather then its current full-priced MSRP. With the exception of its potent level editor, this shinobi shows little mastery of novelty, nuance, or good old-fashioned ninjutsu. 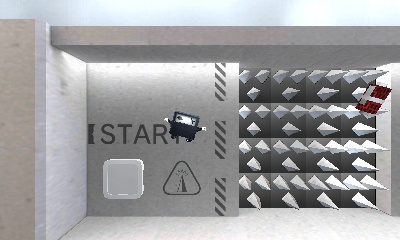