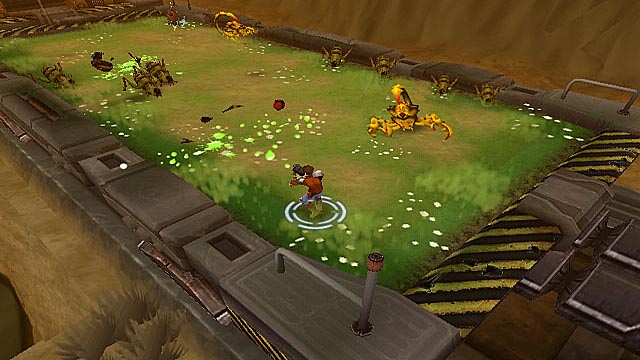 As the recent remakes of Yar’s Revenge, Haunted House, and Star Raiders have demonstrated, remaking classic Atari games can be a challenging undertaking. While retaining the intuitive, arcade-era mechanics of the original license, a modernization must also complete with the visual splendor and complexity of contemporary titles. Although the recent Wii and 3DS release of Centipede Infestation seeks to mimic the success of exemplary revitalizations such as Galaga Legions and Pac-Man Championship DX, the bug butchering title is restrained by a handful of niggling setbacks.

Beyond the stereoscopic capabilities of the 3DS version and the higher framerate of the console iteration, Centipede Infestation plays remarkably similar on both systems. Unlike the coin-op title where players only shot toward the top of the screen, the remake places gamers in the middle of the insect infestation, effectively converting the game into a twin-stick shooter. Beyond 2007’s Geometry Wars: Galaxies for the Wii and DS, both systems’ libraries have a notable deficiency in the genre, endowing Centipede Infestation with at least one irrefutable advantage. 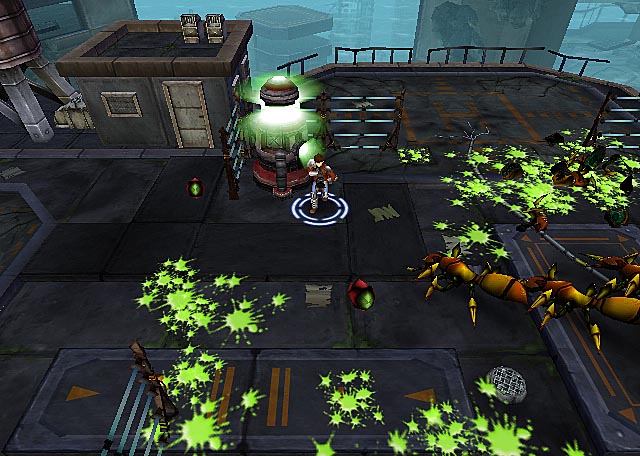 Told via character portraits and voice-over, the title’s storyline is slightly incongruous. Set in a wholly dystopian war-savaged earth, plucky protagonist Max (clad in a t-shirt showcasing the mushroom from the original Centipede) functions as the game’s unlikely hero. The bug slayer’s foil is found in Maisy, gardening hat-clad conservationist concerned with returning the planet to its flora-filled past. As hokey as the duo seem, the mid-missions interludes occasionally seep into poignancy, especially during the last half of the title.

Sadly, the title’s gameplay pales in comparison to similar shooters. Although Centipede Infestation’s array of insects all follow distinctive attack patterns- from bullet-spewing aphids to leaping locusts, levels lack a sense of rhythm. Typically, attack waves rarely escalate in difficulty. Stages often end abruptly, instead of culminating in a satisfying and intense coda. The title’s one highlight occurs when the eponymous pests make an appearance, tasking players with shooting their bodies into bits before blasting their encroaching head into oblivion. While stages have a variety of goals, from protecting Maisy to activating machines with Max’s stomp attack each involves the same type of gameplay. 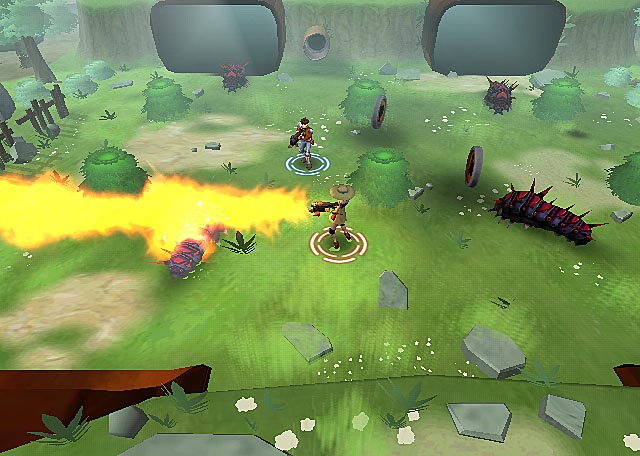 Fortunately, a generous amount of power-ups augment the protagonist’s pea-shooter. Arcing forcing guns, freeze rays, flamethrowers, and even a penetrating laser are available for pickup after defeating certain foes. Grabbing two of the same icons rewards gamers with an even more formidable version of the weapon. Additionally, the sporadic seed dropped by defeated bugs can developer into a gun turret or plant bomb, infusing Centipede Infestation with a faint tower defense feel. Regretfully, there are some offensive arms to avoid- such as the toxic gun which lobs goo at antagonist so slowly it leaves the player vulnerable.

Both the Wii and 3DS version of Centipede Infestation offer habitually competent control schemes soiled by a single oversight. The console version offers two input methods: players may move Max with the Nunchuck stick while choosing a firing direction with the IR aiming of the Wiimote or use they may choose to use the straightforward functionality of a Classic Controller. While cycling and engaging weapons is easy with the former method, players who use the game pad are required to awkwardly use the Wiimote to access power-ups. Likewise, the 3DS iteration requires precise stylus taps (my index finger failed to offer a single pixel of contact) to start a stage and to change weapons. Ideally, the game would have allowed players to utilize the shoulder buttons. 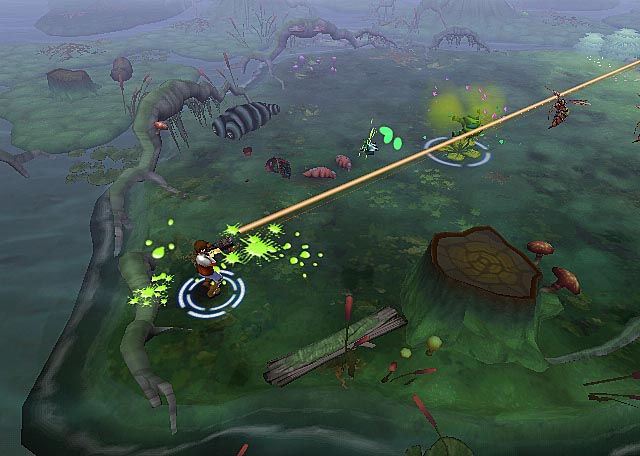 Although developer WayForward Technologies have consistently delivered prodigious 2D platformers, their adaptation of Centipede into the third dimension isn’t without fault. Enjoyable in short dose and with a cooperative partner, Centipede Infestation loses its momentum before the fortieth and final level. That’s a bit of shame, because both systems could use a polished and immersive shooter.