Castle in the Darkness review 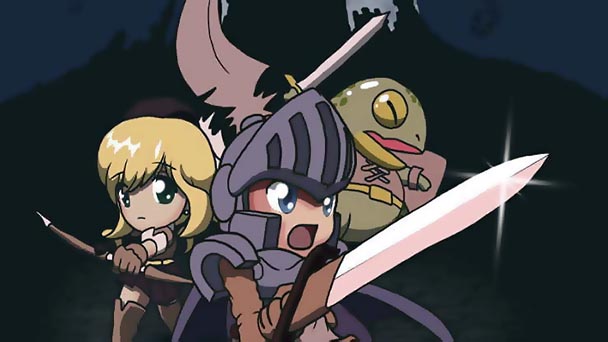 The U.S. release of the Nintendo Entertainment System during the late ‘80s marked a significant paradigm shift for the gaming industry. With American console manufacturers like Atari, Mattel, Coleco, and Magnavox still reeling from the video game crash of 1983, the introduction and proliferation of Nintendo’s hardware signaled a transition toward globalization, paving the way for transnationals like SEGA and Sony to follow suit. Even more remarkable were the games themselves with Nintendo’s developmental and publishing efforts habitually favoring extended play experiences over the quick, adrenaline-fueled encounters popularized by arcades.

Sure, Nintendo wasn’t the first to craft games tailored for a home-based audience. Atari experimented with cartridges like Adventure and the ill-fated Swordquest series, while Activision’s Pitfall prolonged fleeting playtimes into a twenty minute quest for thirty-two pieces of treasure. Undoubtedly, it was the Kyoto-based company that popularized the format, with games like Legend of Zelda, Kid Irarus, Metroid influencing the pace of residential gaming. Soon, third-party publishers followed, giving birth to cherished games like Castlevania, Mega Man, DuckTales, and Faxanadu. These titles not only changed how we interacted with games, but also epitomized the ‘NES experience’. 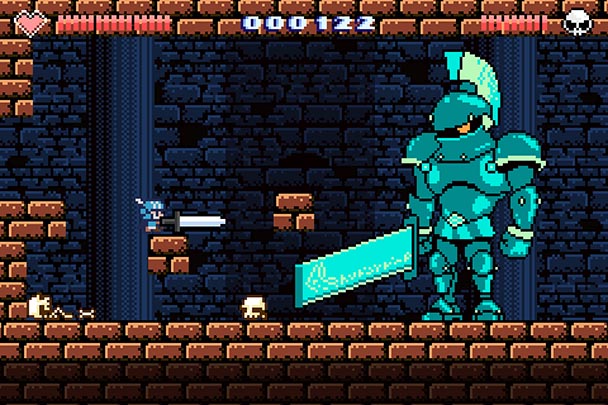 The recent Steam release of Castle in the Darkness pays devoted homage to the era, recreating the frothy plot, challenging mechanics, and effervescent chiptunes that embodied eight-bit gaming. Like many of the aforementioned titles, the game’s trek is sprawling- taking players on a winding tour through a derelict castle following the abduction of its king and princess. It’s a design decision which harks back to a time before mini-maps ushered players about. As such, the title requires gamers to create a mental representation of the fortress, as least until someone crafts a Nintendo Power-esque atlus.

As players begin their quest to liberate the apprehended royals, they’ll start with only a rudimentary sword and shield. With its diminutive range, and subdued stats, the protagonist’s main weapon feels a bit like Castlevania’s basic whip. As such, players are forced to master the nuances of lateral movement and jumping, as they get approach foes without making contact with an enemy sprite. Expectedly, augmentation occurs quickly, with the hero able to upgrade their basic arsenal as well as purchase ranged weapons such as spell attack that recalls the Blue Bomber’s Mega Buster or an armament that summons spinning flames. Later, navigation is supplemented with maneuvers like a double-jump and a block crushing gauntlet, granting access to previously inaccessible areas. 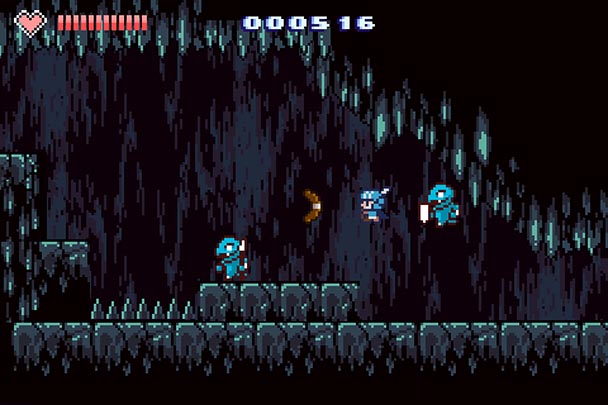 Like any respectable entry in the action/exploration genre, Castle in the Darkness makes a seamless transition between linearity and navigational autonomy. Early on, progress is kept straightforward, with only discretionary backtracking to return to a previous screen, where enemy positions are reset and ready to be slain for supplemental currency. Gradually, alcoves and branching pathways appear, luring players into inns and housings, where the intermittent NPC can offer a word of advice of a noncompulsory quest. Venture further and junctions confront the protagonist, each branch leading players into labyrinthine networks of rooms, halls, and spike-filled chasms.

Naturally, these hallways are filled with a cornucopia of creatures. Passage involves learning the movement patterns and attack methods of each antagonist. From skeletons who shamble back and forth, lethal birds who attack as players draw near, to adversaries who bob in the familiar sine-wave pattern of Castlevania’s Medusa-heads, each foe requires study and experimental tactic to defeat. While some of these monstrosities are capable of shaving a few bars of heath from the main character, they’re largely innocuous when compared to Castle in the Darkness’ ample army of mid and level bosses. 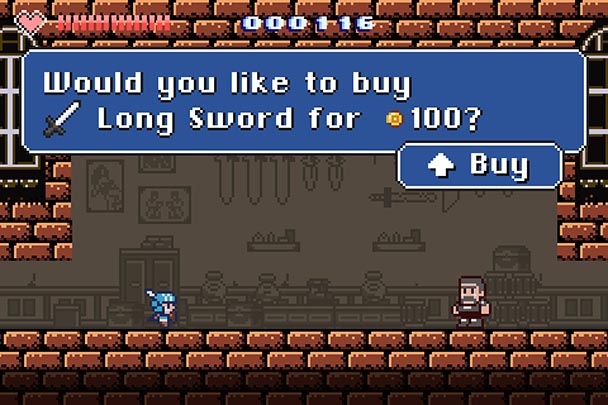 Cleverly, these baddies draw from gaming’s resplendent history, with foes modeled after famous characters like Bub from Bubble Bobble, Double Dragon’s Abobo, and the giant fish boss from The Legend of Zelda: Link’s Awakening. Confronting each creature is a consummate trial which tests the players’ reflexes, patience, as well as their ability to discern patterns. While successive deaths aren’t uncommon, Castle in the Darkness rarely feels unfair, with each fatality goading gamers toward mastery. Triumph awards players with currency, as well as an extra resiliency though an additional speck of health.

Fortunately, fatalities aren’t too punitive. Frequent save points allow players to preserve their progress as well as reclaim their health points. While these rest stops appear at reduced frequencies during the campaign, finding one evokes a surge of satisfaction, especially after confronting a string of demoralizing defeats. Credit should also be given to the game’s UI, with saving and gear equipment handling with a pull of the stick or key press. 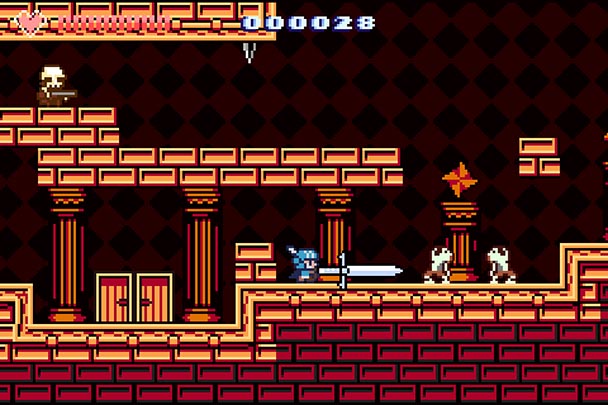 For all but the most determined WASD-vets, plugging in an Xbox controller is the way to play Castle in the Darkness, allowing the type of quick maneuvering that required to triumph during boss battles. Unfortunately, controller support isn’t quite as intuitive as it should be, with the title requiring players to do a bit of fiddling in the options menu. Once players do map the attack and jump buttons, the game overlooks the ability to keymap the pause command.

Although Castle is undoubtedly rooted in the NES era, the game’s aesthetics seem to take a few gratifying liberties. The signature flicker that would erupt when too many elements shared the same scanline is gone, replaced by a continuous, steady, cavalcade of designer Matt Kap’s sumptuous sprite-work. Given the artists background on games such as The Binding of Isaac: Rebirth and 1001 Spikes, it’s not surprising that Castle in the Darkness is a tour de force is retro opulence, packed with bitmaps and baddies that play like an almanac of the eight-bit history. The game’s soundtrack is equally as adept, with a collection of songs that very from melodious harmonies that sound like Mega Man outtakes to obfuscated demakes of pop music chart-toppers. 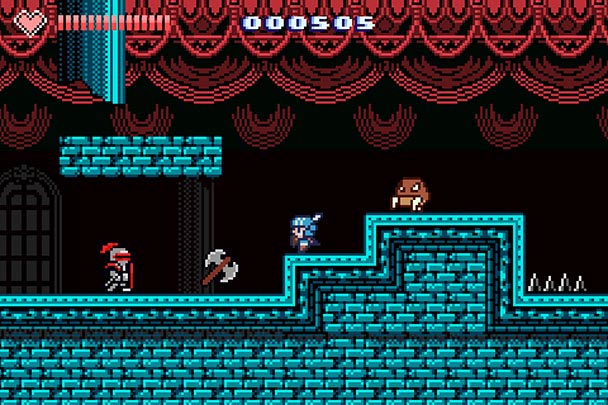 To sweeten the package, the campaign is augmented with a menu of indulging supplements, conferring access to an easy mode and an early demo build for the game. Given the quality of the main game as well as these extras, Castle in the Darkness’ six dollar price is incredibly reasonable. Hopefully, publisher Nicalis will make the title available to console gamers, closing the circle of Castle’s trajectory.

Castle in the Darkness was played on the PC with review code provided by the publisher.

Castle in the Darkness
Platform: PC
Developer: Matt Kap
Publisher: Nicalis
Release date: February 5th, 2015
Price: $5.99 via Steam
Castle in the Darkness review
The U.S. release of the Nintendo Entertainment System during the late &lsquo;80s marked a significant paradigm shift for the gaming industry. With American console manufacturers like Atari, Mattel, Coleco, and Magnavox still reeling from the video game crash of 1983, the introduction and proliferation of Nintendo&rsquo;s hardware signaled a transition toward globalization, paving the way for transnationals like SEGA and Sony to follow suit. Even more remarkable were the games themselves with Nintendo&rsquo;s developmental and publishing efforts habitually favoring extended play experiences over the quick, adrenaline-fueled encounters popularized by arcades. Sure, Nintendo wasn&rsquo;t the first to craft games tailored for&hellip;

Summary : Like Shovel Knight, Castle in the Darkness is a reminder of the charm and challenge of the eight-bit era, providing a rewarding journey that flirts with the fringes of frustration.