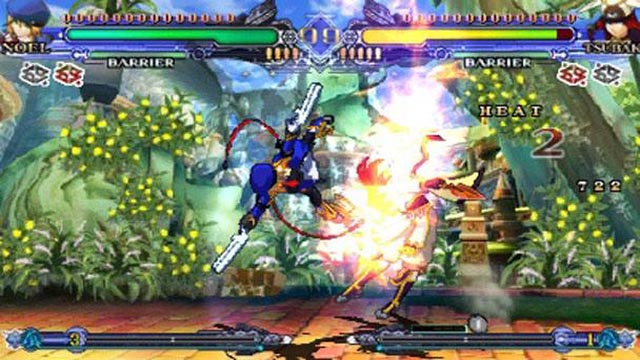 BlueSwim’s Take: The 3DS launched just a shade over two months ago. Since then, it has seen the release of not just one, but two quality fighting games: Super Street Fighter IV: 3D Edition and Dead Or Alive: Dimensions. Super Street Fighter IV: 3D Edition was the star of the launch line-up, selling over double the amount of copies that Pilotwings Resort, the second best-selling 3DS launch game, sold. Dead Or Alive: Dimensions is arguably the best post-launch 3DS game released to date. Now, a mere week after Dimensions hit store shelves, comes a third fighting game with one major difference from the previous two: it doesn’t have online multiplayer. The mode many consider to be the big draw of both SSFIV:3DE and DOA: Dimensions is nowhere to be found. Can BlazBlue: Continuum Shift II‘s other modes make up for this glaring omission? The answer may surprise you.

While it doesn’t have online play, BlazBlue: Continuum Shift II offers far more for solo players than the genre’s typical “Arcade, Versus, Training, & Options” line-up (all of which CSII features). One of Continuum Shift II‘s main draws is its voiced visual novel Story Mode which covers each character’s story on the way to unlocking the “true ending” for the game. Players new to the series will be pleased to know that there is a “Previously On BlazBlue…” feature to help you get up to speed on the lore. New players will also be able to learn BlazBlue‘s ropes in the game’s Tutorial and Challenge Modes. Returning from previous BlazBlue games are the Score Attack Mode (which is exactly as it sounds) and an updated version of Continuum Shift‘s Legion Mode, now called “Legion 1.5”, where your goal is to make your way to and conquer a certain point on a map by winning fights and adding a defeated opponent to your army. What’s new for 1.5 is that you make your way through six stages instead of choosing an easy, medium, or hard map to play, as in BB:CS. It’s a neat way to play by yourself, but it can’t hold a candle to the brand new mode debuting in BB:CSII. 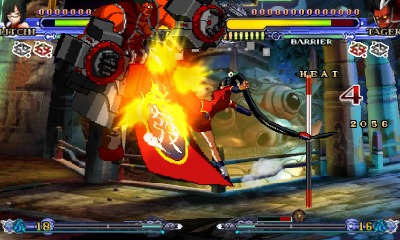 New for Continuum Shift II is the Abyss Mode, a unique mix of the traditional Survival Mode of fighting games and the Item World from Disgaea. You start out by buying items (if you have any unlocked) from the mode’s store using the in-game currency earned by playing any of the game’s modes. From there, you pick a fighter and start diving down into the Abyss by beating opponents whose strength gradually increases the further down you go. Your “depth” number grows as you pound and combo your opponents. Every time your depth number advances 20 levels, you’ll see the phrase “HERE COMES A NEW CHALLENGER!” pop up mid-fight and a “boss fight” will start. Beating this boss grants you your choice of one of five rewards that can increase your fighter’s stats, give your fighter new abilities (such as auto heal), add more in-game currency to your reward for that play-through, or allow you to descend even deeper into the Abyss without having to do the legwork. As you advance, you earn rewards in the form of CSII‘s in-game currency and profile experience points (leveling-up your profile unlocks gallery content to buy), the former can only be collected if you choose to exit when given the choice after descending 100 levels or when you reach the bottom of the Abyss. If you get knocked out, you’ll have to dive even deeper down than the depth you were KO’ed at to retrieve the big in-game currency reward. BB:CSII desperately needed a mode like this. It’s no simple 20-minute time killer. It’s a substantial mode that will take you a decent amount of time to work your way through. While it doesn’t completely make up for the lack of online play, it is good enough to give the mode selection a passing grade.

Having a great line-up of modes is important, but it’s the gameplay that can make or break a game. Before I start talking about that, let me first explain how the game works. BlazBlue is a 2D fighting game that uses a four button interface consisting of light(A), medium(B), heavy(C), and drive(D) attacks. The first three are self-explanatory. The drive button, on the other hand, is what separates BlazBlue from most other fighting games. Each fighter has a different ability tied to the drive button. For example, Ragna The Bloodedge, BlazBlue‘s main character, gets bits of health back for every drive move that connects with the opponent. Jin Kisaragi, Ragna’s rival, can freeze his opponents with his drive moves. BB also sports super moves in the form of distortion drives and astral finishes (super moves that can only be done in the deciding round and when the opponent has low health). Without taking the time to learn the drive moves for your fighter, you’ll be putting yourself at a huge disadvantage. This isn’t a button-masher. Furthermore, there’s no touch screen shortcuts-to-execution to fall back on. The touch screen’s only use is displaying a list of your fighter’s moves and the commands for them. Tapping the screen cycles through the pages of moves. 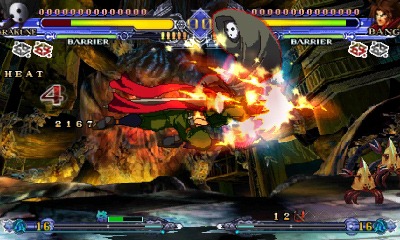 Now that you have a good idea of how to play BlazBlue, how does the 3DS version stack up? It plays almost exactly like its console brethren, and that is a very good thing. The BlazBlue games earned their reputation as some of the best fighters released this generation by offering fast, addictive, and just plain fun fighting. Understandably, being on the 3DS, there isn’t going to be the option of playing with an arcade stick. Unfortunately, there isn’t a good excuse for the lack of Circle Pad support. While four of its different directions can be assigned to function in place of buttons, you cannot use it to control your fighter like you can with SSFIV:3DE and DOA: Dimensions. The direction pad is the only way to control your fighter. When I first tried out CSII on the 3DS, I picked Noel Vermillion (like always) and was surprised at how inconsistently I could pull off her Optic Barrel (quarter circle forward + A, B, or C) move. I began to worry that the controls would be a huge mountain to overcome. This concern was short lived thanks to something in the options called “command assist”. What this feature does is help to compensate for the weak diagonals that the 3DS’ D-Pad has. The controls improved immediately. They still aren’t 100% perfect, though, even with the command assist turned on (it’s off by default).

On the home consoles, BlazBlue‘s presentation is fantastic. The graphics consist mainly of stunningly beautiful 2D artwork drawn in HD, characters are brought to life by talented voice actors and actresses, including Tony Oliver (Lupin The 3rd) and Michelle Ruff (Rukia in Bleach, Yukari in Persona 3), and the soundtrack handled by Daisuke Ishiwatari of Guilty Gear fame is one of the best the fighting genre has ever produced. Unfortunately, this strong presentation doesn’t quite carry over to CSII on the 3DS. The graphics have been scaled down significantly due to the 3DS not running in HD. Fighters don’t have as many frames of animation as on the home consoles (but it doesn’t appear to affect gameplay) and once-breathtaking backgrounds now have only a handful of frames of animation. It’s not all bad news for the graphics, though. Not only is the 3D is very pronounced, but slowdown is rare as it was only noticeable to my eyes during some astral finishes. The audio suffers far worse than the graphics do. Sound effects and dialog audio have been heavily compressed and are distorted to the point where I had to put on my headphones to make sure that the popping and scratchiness wasn’t the fault of my 3DS’ speakers. The game sounds awful. The music is compressed, as well, but doesn’t suffer from the distortion that plagues the dialog and sound effects. Crank the music up and mute the rest of the audio. 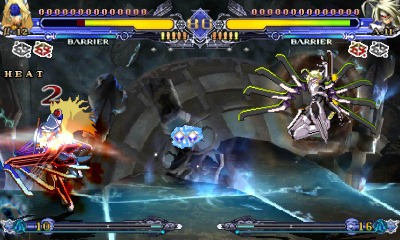 Ultimately, the decision as to whether or not you should buy BB:CSII boils down to how important playing online is to you. If you need to have a live person playing on the other end, this isn’t the fighting game you’re looking for. If have no intentions of ever setting foot online in any 3DS fighting game, get BlazBlue: Continuum Shift II. It has more for solo players to do than DOA: Dimensions and SSFIV:3DE combined. If BlazBlue had a relatively lag-free online mode, it would be the best of the three 3DS fighters. As it is, it’s simply a great, portable, offline fighting game on the Nintendo 3DS. If that’s all you want, then don’t delay in picking up BlazBlue: Continuum Shift II. Seriously, don’t wait. I have the feeling that this one won’t be the easiest 3DS game to find before too long.

DesertEagle’s Take: I’ll have to admit, Ragna and company’s 3DS debut didn’t impress me as much as BlueSwim, due to a number of gaffes in Arc System Work’s middling conversion. Although it’s expected that BlazBlue would lose some fidelity in its conversion from 720p home consoles to 240 pixel tall 3DS screens, cosmetic details like Noel Vermillion’s (Yep, she’s my favorite also) beret-removing win animation lose their coquettish luster. Even worse, when the portable’s three dimensionality is engaged, the game halves it’s sixty frames per second output, sullying Blaz’s timing for pro-level pugilists. Even a middling fighter like myself had to adapt to the game’s conversion in tempo and fluidity. 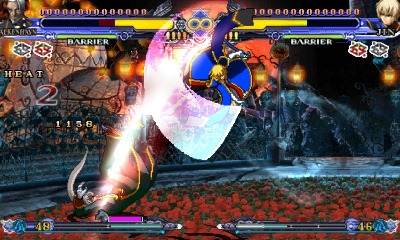 While I usually carry my 3DS in sleep mode to accumulate StreetPasses and Play Coins, Continuum Shift II forced me to alter my habits. Putting the game on standby drains the portable’s battery in a matter of a few hours, making me wonder just how BlazBlue slipped past the QA department. Unlike my colleague, I’m more intolerant of the cartridge’s lack of online play. If both Super Street Fighter IV: 3D Edition and Dead or Alive: Dimensions can offer net-enabled competitions, Blaz‘s deficiency is inexplicable.

Despite these drawbacks, BlazBlue does have its virtues. The cartridge give gamers free access to mu-12, Makoto, Platinum, and Valkenhayn-  four previous play to play characters. Of these, the latter is particularly pleasing to play, as the mild-mannered butler has the power to convert into a seething, combo-mad, werewolf with a press of the drive button. The title’s selection of modes are quite impressive, with Legion 1.5 and Abyss have the potential to keep players busy for weeks. I also appreciated how the lower touchscreen was used to display a player’s stats- everything from the percentage of gallery unlocks to the most frequently chosen fighters is articulated. 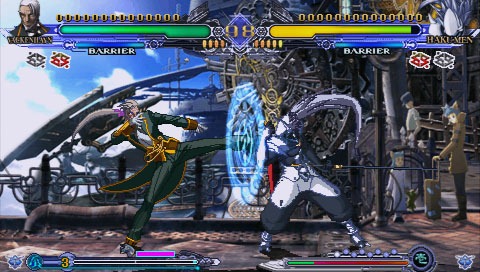 Although software-starved 3DS owners may be tempted to add BlazBlue: Continuum Shift II to their collection, I’d recommend a purchase on another platform over the 3DS iteration. While the PSP iteration is marred by interlacing woes when played on a 3000 model (and framerate issues in ad-hoc matches with a PSP-1000), the version’s sound sample quality and larger screen deliver a more faithful interpretation of the console fighter. At a price that’s also $10 cheaper than the 3DS version, you may want to keep both the wheel of fate and your UMD drive turning.