Arslan: The Warriors of Legend review 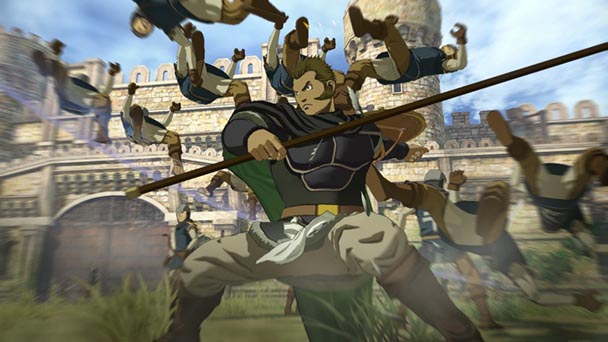 For years, Omega Force’s output was the punching bag on the industry, disparaged for having simplistic and derivative gameplay. But gradually, the Ashikaga-based studio molded their musou franchises into respectable hack-and-slash games that managed to garner muted acclaim. Both Dynasty Warriors and Samurai Warriors continued to blend the historical and the fantastical, while refining gameplay and adding an encyclopedic amount of content for players to sift through. Meanwhile, Empires spin-offs added Romance of the Three Kingdom and Nobunaga’s Ambition-style planning to the pugnaciousness, permitting players to achieve unification through an amalgam of brain and brawn.

Then there were the deviations that transported Warriors gameplay to other worlds. From Mobile Suit Gundam, Fist of the North Star, One Piece, to The Legend of Zelda and Dragon Quest, Omega Force’s template was applied to a number of properties- with each work steadily advancing and expanding the formula. With the release of Arslan: The Warriors of Legend, the developers tackle adaptation once more, utilizing Yoshiki Tanaka’s long-running novel series (and more recently, a Funimation-licensed anime) as source material. While the end result might be a bit light on content, the game’s execution shows Koei Tecmo A-team establishing a new watermark for storytelling. 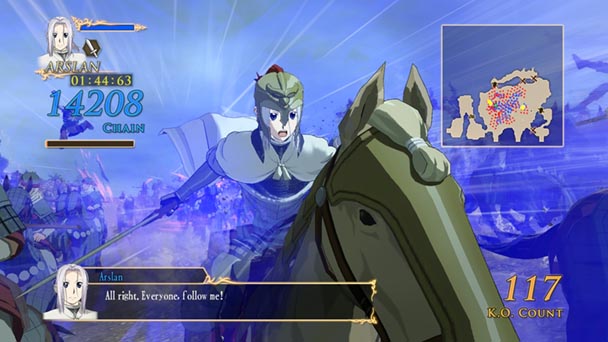 For musou vets, many of Arslan’s gameplay elements will feel gratifyingly familiar. Stages task players with taking one of fifteen characters onto the battlefield, either on foot or horseback. Subduing legions of encroaching foes is rooted in a two button combat system, with both Normal and Power Attacks producing combos that can slice through swaths of lesser foes. Each friendly combatant can cycle through their weapon set with a press of the directional pad- with each armament extending its own distinctive set of benefits and detriments. Similar to Dynasty Warriors’ Switch Counters, players can extend combos with a press of a shoulder button. These Chain Strikes issue an assault with your alternate weapon before reverting back, allowing players to quickly rack up a lofty K.O. count. Unsurprisingly, defeating enemies gradually increases your Special Gauge, with a press of the circle button unleashed a firestorm of pent-up ferocity.

But pleasingly, The Warriors of Legend also adds a few stirring mechanics. Move into tornado-like areas called Rush Zones while pressing R2, and you’ll trigger a Mardian Rush, consolidating an entire battalion into a single, controllable force of nature. Although troop type is pre-determined, gamers can command their regiment to attack, with the hopes of upping a chain counter and initiating a devastating onslaught. Thrashing enemy officers or accomplishing tasks with proficiency awards players Skill Cards, endowing Arslan’s characters with a light customization component, as you select from up to three perks for your character. Cleverly, it can provide devotees with an edge, while being ignored by those lured into The Warriors of Legend for the action. 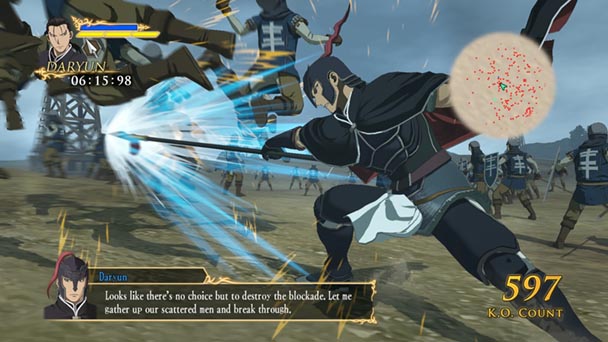 Largely, confrontations with crowds of foes is satisfying, with Arslan dropping some of the autonomy found in other musou games. Instead of skirmishing on key points of the battlefield to steadily turn the tide of war, the game directs you through a succession of tasks, grading you on the speed of your actions. While the linear approach might seem like a step back, it allows the title to improve the bond between plot and play, imparting impetus for your actions. After a succession of iterations riffing on Luo Guanzhong’s Romance of the Three Kingdoms, a change of context is energizing- especially when the game tackles thorny issues like slavery and the moral compass of the ruling class.

On the downside, it means that epic conflicts are all filtered through Omega Force’s mechanics. Although it works for some conflicts, settling every confrontation in a similar manner is a detriment. The other problem stems from Arslan’s boss encounters, where enemy leaders are given durable but largely concealed shields that players must destroy. The result is that leaders must be hit multiple times, making every climatic encounter homogenous and slow-paced. Omega Force really need to find a way to enliven these showdowns before their release of Attack on Titan. 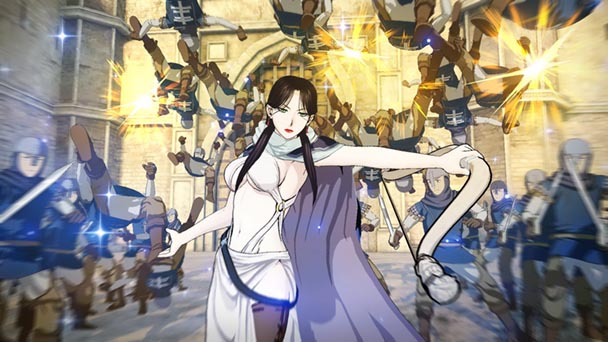 Fortunately, any executional transgressions are tempered by the game’s adept storytelling. Although The Heroic Legend of Arslan hasn’t generated a substantial following in the West, the IP’s major plot points and characters will likely feel familiar to anyone who enjoys historical epics. Recontextualizing the 19th Century Persian tale, Amir Arsalan, the story begins as the eponymous fourteen-year old lead is force to take the helm of his conquered country, after a treacherous plot ended his father’s reign. Much of the storyline’s best qualities come from its characters, with Arslan’s inexperience balanced against his fighting prowess and more importantly- an aversion for unnecessary bloodshed. What we learn about the character also comes from his interactions with a cast of interesting secondaries, from the relationship with his loyal vassal Daryun, to the fascinating Narsus, who contributes a Socratic vibe to the narrative.

Luckily, each of Arslan’s compatriots also serve as officers, allowing for some variation during the annihilation of enemy troops. With each character having their own specials and arsenals, there’s a satisfying amount of distinction to be found, especially when officers like Narsus are given access to decoys and traps. But Warriors stalwarts will undoubtedly be disappointed by the size of The Warriors of Legend, which is less than a quarter of most musou casts. Likewise there’s an absence of additional playmodes; beyond Free Mode, there’s less content here than in most other Omega Force titles. 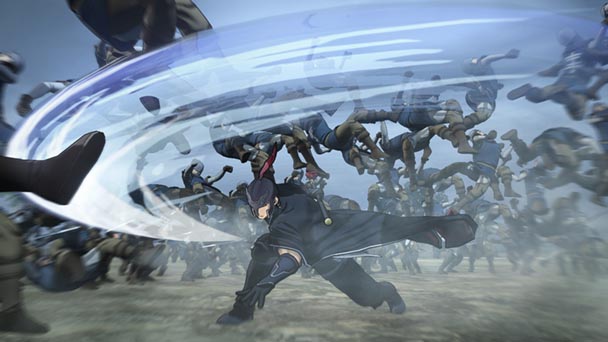 Arslan: The Warriors of Legend is visually adept, targeting sixty frames per second on the PlayStation 4. Although there are some dips when a contingent of combatants show up on-screen, the fluctuations rarely affect gameplay. But that’s not the only graphical perk, with the title edging on the quality of the 2015 anime. While loading times can be protected, they’re disguised by attractive animations which offer expositionary bits. In game cinematics are even better, with only CyberConnect2’s Naruto titles better able to emulate the animated source material. The Warriors of Legend music and voice acting are culled from the twenty-five episode run, and while it might be a bit hard to read the subtitles when playing, it’s undoubtedly better than a stilted delivery would have been.

Although The Heroic Legend of Arslan isn’t a household name in the West, Warriors of Legend is good enough to become a catalyst, prompting players to seek out the source material. Those who dislike Omega Force’s gameplay won’t appreciate another battle that pits a handful of heroes against an army of thousands. But for musou maniacs, The Warriors of Legend demonstrates the developer gradually evolving- as they wrap their mechanics around new properties refining their storytelling abilities in the process. 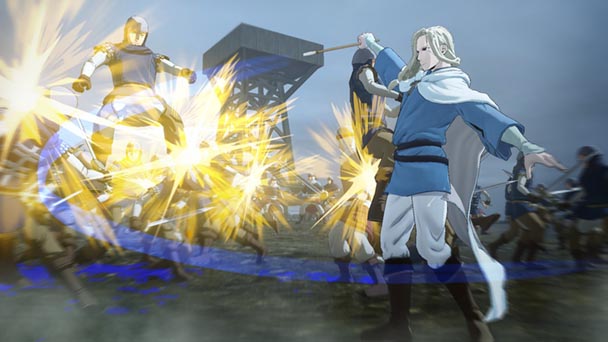 Arslan: The Warriors of Legend was played on the PlayStation 4 with review code provided by the publisher.

Arslan: The Warriors of Legend
Platform: PlayStation 4 (reviewed), also available on Xbox One, PS3
Developer: Omega Force
Publisher: Koei Tecmo
Release date: February 9th, 2016
Price: $59.99 (PS4, Xbox One), $49.99 (PS3, Digital Only), $53.99 (PC)
Arslan: The Warriors of Legend review
For years, Omega Force&rsquo;s output was the punching bag on the industry, disparaged for having simplistic and derivative gameplay. But gradually, the Ashikaga-based studio molded their musou franchises into respectable hack-and-slash games that managed to garner muted acclaim. Both Dynasty Warriors and Samurai Warriors continued to blend the historical and the fantastical, while refining gameplay and adding an encyclopedic amount of content for players to sift through. Meanwhile, Empires spin-offs added Romance of the Three Kingdom and Nobunaga's Ambition-style planning to the pugnaciousness, permitting players to achieve unification through an amalgam of brain and brawn. Then there were the deviations&hellip;

Summary : Arslan: The Warriors of Legend is the rare licensed game that’s just good enough to stand on its own. Although it lacks the archetypal amount of content, the title is redeemed by an ability to simulate the look and characterization of the anime.