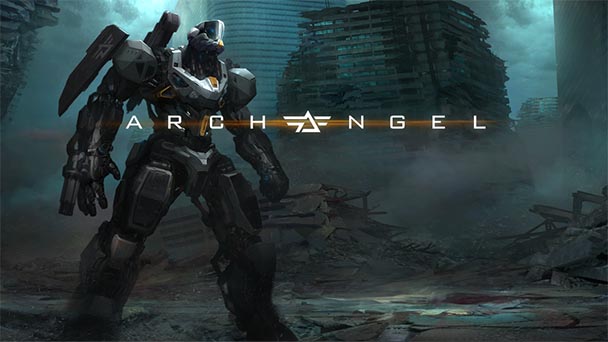 Growing up on a steady diet of Robotech/Macross, Mobile Suit Gundam, and Bubblegum Crisis meant that the desire to control an actual mecha is a persistent part of life. Occasionally, games would attempt to satiate that hunger, as a succession of two- and later, three-dimensional titles strove to put players into the pilot’s seat. Although a variety of titles, ranging from Cybernator, Front Mission, Chromehounds, and Hawken were all admirable, each was built on technology that couldn’t create a compete sense of immersion. But with the capabilities of virtual reality, the possibility of full-blown simulation now seems within reach.

Largely, the sense of being housed in a six-story high cockpit capable of colossal destruction is hinted at in Skydance Interactive’s Archangel. Supporting both the HTC Vive and Oculus Rift, the game’s fifteen-minute prologue demonstrates a remarkable amount of potential, providing an evocative context. After players select from either a male or female protagonist, Archangel opens with a train shuttle ride, exhibiting interaction between the lead and their son, with dialog that seems unexpectedly intimate. And what follows will surely raise the pulse of players, as they first spy the game’s humongous, eponymous mech, before being elevated into the cockpit for a quick sequence of training exercises. 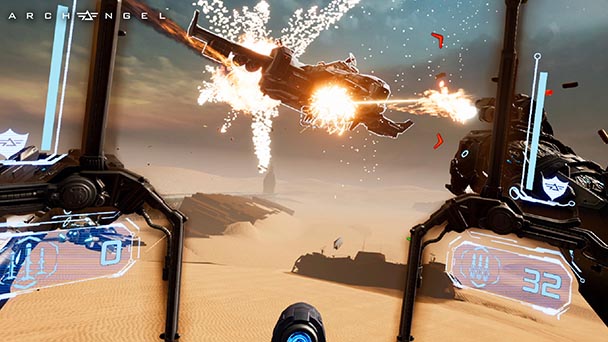 Initially, being able to ball up your fist and punch with hulking steel arms seems intoxicating. As does some of the other functions of your Archangel mech, from rapid machine-gun fire, a barrage of missiles, and shields that can repel attacks from sides of your bipedal beast. While there are limitations- guns take time to reload, and defensive measures take time to refill with energy, there’s also the unescapable sense that you are a walking specter of death and destruction, able to reduce entire armies to misshapen metal and charred corpses.

But once Archangel actually takes to the battlefield, some of the excitement will begin to dissipate. Sure, it’s thrilling to shamble across the battlefield as a towering catalyst of devastation, but when you realize that the title is an on-rails shooter, without the ability to control direction or tactic, things become a bit disheartening. 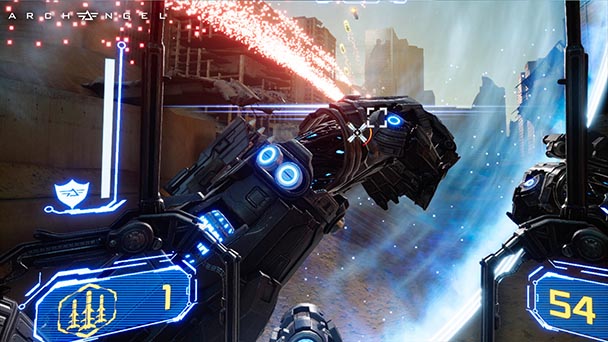 On the upside, you certainly feel powerful. Your machine gun can easily annihilate the squads of infantry that show up emphasized on your simulated heads-up display. Naturally, a steady blast of rapid-fire ballistics can wreck a formation of enemy tanks, while a missile assault sends one of the enemy’s high-tech flying vehicles careening to the ground. But before long you’ll recognize that there’s a preferred weapon for every type of target, and Archangel starts feeling less like a mech-sim and more like a rhythm game where you must instinctively respond to each visual cue.

Perhaps the game might feel more visceral if there was more variation to combat. But shielding against enemy attacks and targeting opponents is the bulk of gameplay, making your giant arms feel somewhat useless. But when using the Oculus’ touch controller, punching isn’t quite 1:1, making the sporadic pummeling feel disorientating. What’s more, when you are required to grab health replenishing powers ups, Archangel’s control scheme stumbles and can produce frustration. 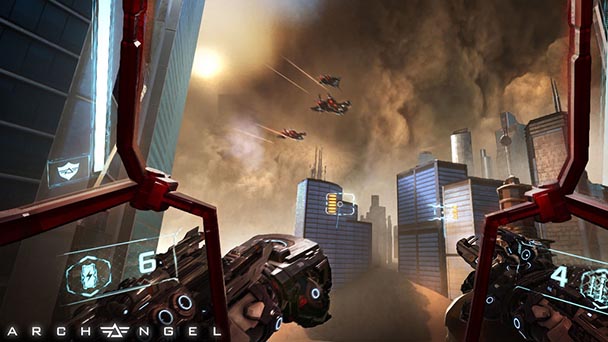 While infuriation is rooted in the health recovery system, it’s also exasperated by Archangel’s difficulty level. Even when the mastery of simultaneous shielding and offense has been mastered, the game can be unforgiving, making defeat commonplace. In the game’s defense, checkpointing is rather liberal, but do expect to have to replay stage sections a few times during the gandame’s four- to five-hour playtime. Like most on-rails shooters, Archangel is a succinct experience, so if longevity is important, you might want to proceed with caution.

Visually, Archangel excels with output only bested by Robo Recall. Your perspective for most of the time is in the cockpit of your mech, where you’ll see a suitably futuristic heads-up display and occasional arm, which all look first-rate. Largely landscapes are just as well rendered, with stages across a variety of different environments and times of day. But it’s the game’s weapon effects and explosions that are the real highlights here, with a steady stream of glowing tracer rounds turning enemies into sky-filling fireworks. Sonically, the game’s summit is the voice of your AI system, which helps to sell the experience of piloting cutting-edge weaponry. 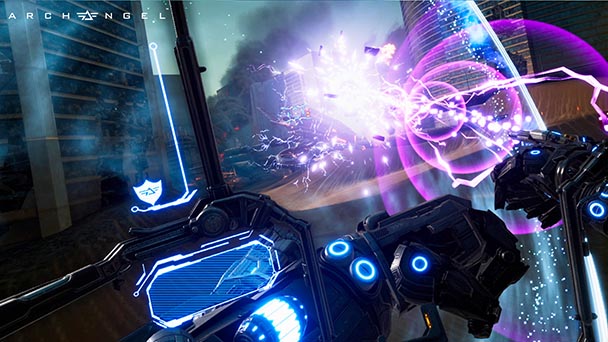 Although Archangel demonstrates developer Skydance Interactive’s ability to craft a kick-ass mech experience, a few issues keep the game from becoming a requisite purchase. Sure, shooting things in VR looks great, but the decision to turn the game into a linear shooting gallery is disappointing. With a bit more autonomy, Archangel could have been downright delightful instead of merely decent.

Archangel was played on the PC with an Oculus Rift
with review code provided by the publisher.

Archangel
Platform: PC with HTC Vive or Oculus Rift, also on PSVR
Developer: Skydance Interactive
Publisher: Skydance Interactive
Release date: August 2nd, 2017
Price: $29.99 via Steam
Archangel (VR) review
Growing up on a steady diet of Robotech/Macross, Mobile Suit Gundam, and Bubblegum Crisis meant that the desire to control an actual mecha is a persistent part of life. Occasionally, games would attempt to satiate that hunger, as a succession of two- and later, three-dimensional titles strove to put players into the pilot&rsquo;s seat. Although a variety of titles, ranging from Cybernator, Front Mission, Chromehounds, and Hawken were all admirable, each was built on technology that couldn&rsquo;t create a compete sense of immersion. But with the capabilities of virtual reality, the possibility of full-blown simulation now seems within reach. Largely,&hellip;

Summary : While Archangel establishes a compelling context, simplified gameplay might mean that mecha maniacs will be left wanted more.