All Zombies Must Die Review 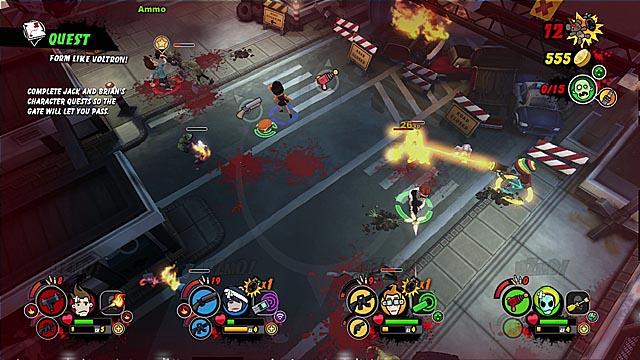 What is the concept? Resurrecting many of the undead exterminating mechanics established by 2009’s Burn Zombie Burn!, developer Doublesix offers another dose of amusing apocalyptic action with All Zombies Must Die. One of the core flaws with the studios’ earlier title was its limited depth; Burn focused solely on the slaughter of sizzling, score-increasing mobs. To combat this simplicity, recent Xbox Live Arcade and PlayStation Network release of All Zombie Must Die expands the gameplay with a light role-playing framework. Although this device helps offset the tedium of combat, it also introduces a few new faults as well.

Players take control of one of four characters, video-game devotee Jack, his perpetually perturbed ex-girlfriend Rachel, geeky scientist Bryan, or Lexo, the obliging extraterrestrial. While keen reflexes are helpful when traversing around encroaching swarms of zombies, success necessities more than just a swift trigger finger. With four different afflictions which can affect foes (ranging from fire, radiation, sound, and shock) the methodical murder of the undead is frequently a stipulation for advancement. 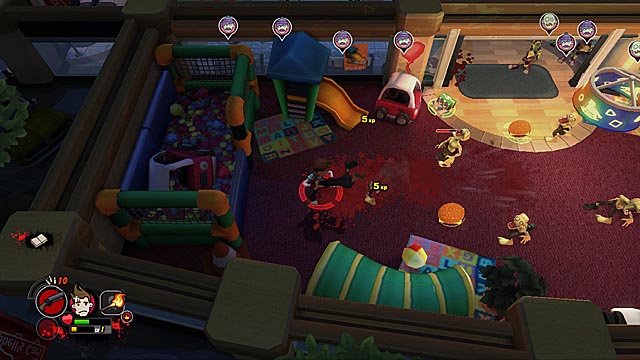 As such, All Zombies Must Die is a bit different from the tide of simplistic twin-stick shooters which have deluged console download services. Beyond the aforementioned modifiers which influence loot drops, the title endows players with the ability to conjoin two devices into outlandish weapons as well as supplies a succinct character supplementing system. Tied together by a storyline which regularly concedes video game contrivances, the title offers a bit more that the archetypal scoot and shoot.

What are the game’s strengths? Powered by Unreal Engine 3, All Zombies Must Die delivers a pleasing variety of well-drawn locales elevated by a steady framerate. From wrecked residential zones to deliberately sterile shopping malls, each of the game’s environments is rendered in a whimsical retro-modernist aesthetic. Equally as inspired are the animations for each antagonist, highlighted by the measured gait on a zombie SWAT member or the running-in-place routine exhibited by a reanimated jogger. 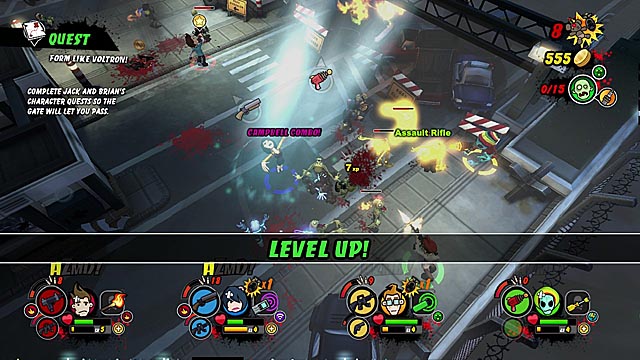 What are the game’s weaknesses? For a title which becomes exponentially more enjoyable when additional players join the fray, All Zombies Must Die’s lack of an online multiplayer component is perplexing. As it stands, couch co-op is the preferred method of play, as death in a single-player game stipulates a stage restart.

This problem is compounded by the tendency of AI enemies to surround an on-screen protagonist. Although the developers tried to alleviate the setback with the sporadic distribution of a smart bomb, a single wayward turn has the capacity to drain a full health bar. For multiplayer games this isn’t a problem, as another character can blast an escape outlet amidst an assaulting group, but for the solitary participant, death by besieging baddies can be frustrating. Occasionally, enemies wrestle control away from players- such as when a mutant tosses a character skyward. Ideally, a nimble press of a button would have allowed for an in-air recovery instead of forcing players to idly watch as their health is automatically depleted. 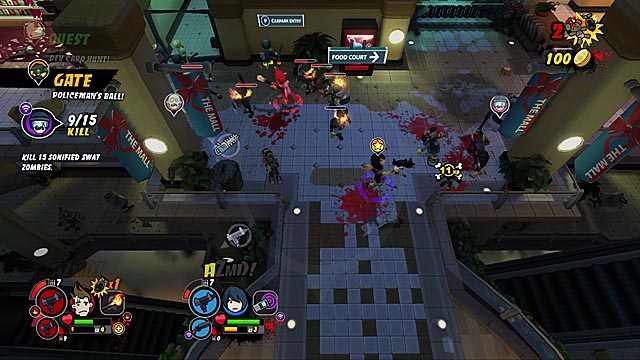 For some, the game’s ceaseless procession of fetch quests will prove tiring long before the credits roll. Although tasks are diversified by alcoves which hold small bonus and combo opportunities, the game’s linear trajectory does little to mask the grind of missions. A reliance on backtracking tends to exasperate the homogeny or errands.

Would I enjoy the game? While players who have completely exhausted their appreciation for twin-stick genre won’t find redemption in Zombie’s role-playing elements, others may be more forgiving. With a crew of comrades strengthened by eccentric weapons, the title comes alive- seamlessly blending cooperative and competitive elements. Regrettably, single players won’t see these virtues- so make sure to round up your mates before committing to this ten dollar download.

A copy of All Zombies Must Die for the Xbox 360 was provided by the publisher for review.