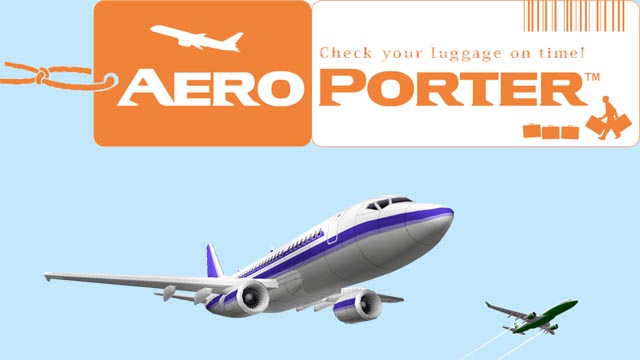 Typically, video game vocations spotlight the prestigious- allowing players to pilot multimillion dollar military jets or to fling the pass that secures a Superbowl win. Less frequently, the industry puts us in the well-worn work boots worn by the middle class, permitting say, PSP owners to experience the monotony of assembly line work in Work Time Fun. Yet, all too often, these simulations of proletarian professions offer more of a critique of working-class drudgery rather than deliver a gratifying, gaming experience.

Recent Nintendo eShop release Aero Porter admirably straddles those tensions, delivering a hectic representation of baggage handling that also articulates the thanklessness of the oft-unseen job. As the second title adapted from Guild01– a Japanese collection of four divergent 3DS titles, Porter isn’t likely to lure in gamers with a high concept or dazzling aesthetics- however the title is poised to win the hearts of players looking for a unique and challenging puzzler. 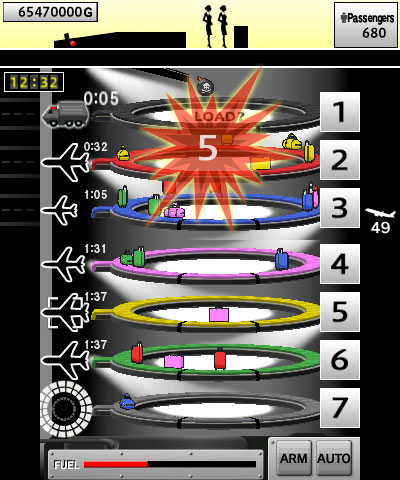 Initially, Aero Porter’s gameplay seems woefully basic. The first few levels task gamers with transporting colored-coded luggage to three similarly-shaped revolving tracks. To shift bags and suitcases to other rings, players simple use the shoulder buttons to transform the stack of rings into a corkscrew, allowing belongings to either ascend or descend the baggage structure. Once one of the rotating belts is filled with homogenously hued gear, gamers use the directional pad to move a cursor to the appropriate ring, and a press of the “A” button loads all of the cases- permitting a plane to depart.

Soon, Aero Porter’s three conveyer belts grow in number, taking players with juggling seven different colors of baggage. Additional complications come in the form of fuel management, as the baggage-go-round swills to keep the procession of personal belongings spinning. Pleasingly, players can even reduce the amount of power consumption if they dim the lights on each belt- but that choice makes identifying similarly colored luggage a bit trickier. Later, VIP’s make an appearance, demanding that their monogrammed bags are loaded onto planes first while suspicious packages need to be identified by blowing into the 3DS mic and watching for a telltale sign of unusual steadiness. 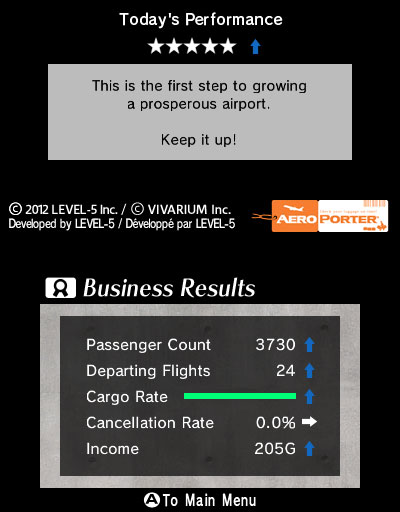 All this time, players are being gently goaded and gently by an unseen sorting manager named Bob Saito. His textual approvals and admonishments help give Aero Porter a sense of demeanor and direction as gamers are rewarded with a plane customization component and the ability to share their riotously colored jets via Streetpass encounters. It should be noted that by the fourth or fifth stage, Aero Porter’s difficulty leaps skyward, forcing players to acclimate to its incessant stream of suitcases. While the title’s level of challenge in never insurmountable, frustration can occur when the game adds additional wrinkles to its already frantic multitasking.

By essentially shirking the portable’s three dimensional capabilities and exhibiting a basic set of visuals, Aero Porter’s screenshots aren’t likely to seize attention. Likewise, the game’s mix of airport sounds and minimalist melodies are a bit austere. Yet, there’s a rationale behind the muted delivery- these understated elements allow players to concentrate on Porter’s constant stream of information without drowning in artistic overload. This is a game you play to feel the elation of successful completing a seemingly insurmountable assignment; graphical grumblers will probably want to look elsewhere for fulfillment. 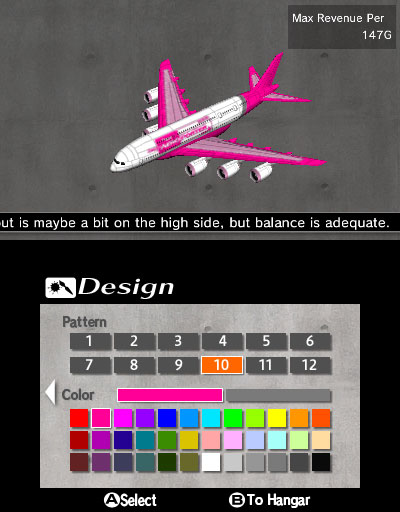 Aero Porter demonstrates the appeal of a novel concept that is proficiently executed. Although becoming a virtual baggage handler doesn’t seem capable of becoming an engaging experience, if reluctant players can get past the context, they’ll discover a unique action puzzler which offers a respectable amount of enjoyment for a reasonable $4.99 USD price.