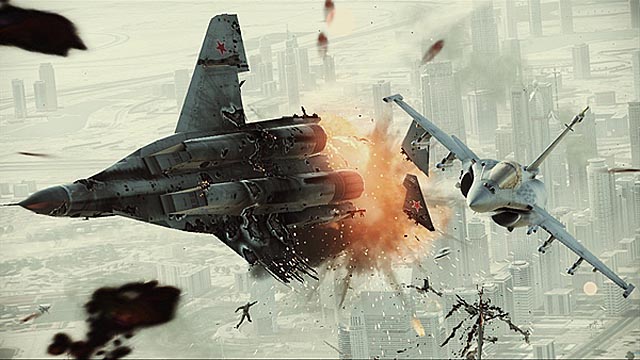 After a dozen franchise entries across a span of nearly two decades, the most menacing foe in the Ace Combat universe is the specter of stagnancy. The old axiom “if you’ve seen one, you’ve seen them all” could certainly be applied to Namco’s resilient franchise. Beyond a steady stream of visual improvements, the series has relied on the same type of monotonous ‘fire and forget’ tenets since its coin-op debut. Whatever thrill was cultivated from chasing on-screen indicators and turning tangos into smoldering scrap metal was tragically diluted as players repeated the task ad infinitum.

With enough renovation to qualify as a reboot, recent release Ace Combat Assault Horizon skillfully revitalizes the sagging series. While still maintaining the franchise’s undeniable arcade influence, the title’s new gameplay mechanics, cinematic ambition, and infusion of variety generate the type of adrenaline-infused experience desired by any budding jet jockey. If not for the title’s fleeting seven-hour single- player campaign, gamers might be encouraged to fire the afterburners and initiate a mach two streak down to their nearest retailer. 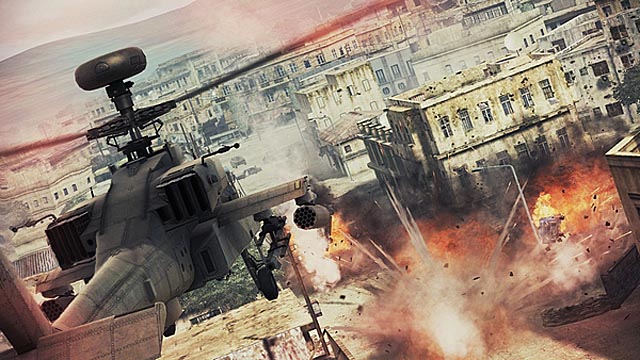 Assault Horizon’s most visceral improvement is the addition of Dogfight Mode (or DFM), which reduces the tedium of launching missiles toward distant specks on the horizon. Once players come into the proximity of an enemy fighter, a press of both shoulder buttons engages a semi-auto chase cam, with players in concentrated pursuit of the tango. Although bandits have the ability to peel off, DFM automates much of the maneuvering involved with pursuit, allowing players to lay waste with their ample supply of missiles and machine gun rounds. Similarly, opponents can engage players- illustrated by a large, on-screen circle. Luckily, hitting the air brakes and instigating a loop can turn the tables, granting player’s an advantageous position on the enemy’s six. Amusingly, this can create a cycle where pursuer and pursuant repeatedly switch roles, elevating Assault Horizon’s intensity past its predecessors.

Since DFM is partially automated, chase sequences deliver tautly choreographed set pieces, as jets zigzag around skyscrapers or civilian aircraft caught in the crossfire. While the illusion is diminished in replay with the same precarious flight paths shown to players, the game does deliver a magnificently visceral recreation of aerial warfare the first time around. Supplementing this spectacle is Assault Horizon’s astute perspective changes, which switches the camera view to a behind-the-weapon view, brilliantly exhibiting the muzzle flash of a torrent of 20mm rounds. With in-game credits earned for replaying missions, players can even unlock vibrant perks like missiles which leave crimson-hued smoke trails. 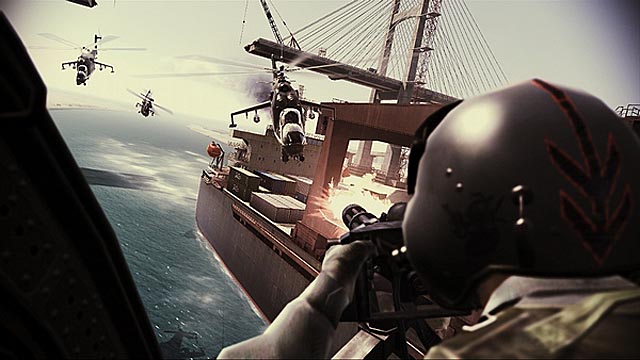 Complementing Assault Horizon’s traditional jet based stages are an agreeable selection of tedium-trouncing levels. Ranging from an on-rails turn as a Black Hawk door gunner, a chance at being a fire control officer aboard an AC-130, to jumping into the pilot’s seat of an AH-64, most of these peripheral sequences demonstrate a controller-clinching intensity. While seeing an attack helicopter harmlessly bounce off buildings is a persistent reminder that Assault Horizon isn’t a simulation, the different mechanics and strategies used in Apache missions elevates the game over its peers.

One of the other triumphs of the title is a comprehensible storyline written by author Jim DeFelice (Leopards Kill, Rangers at Dieppe). Whereas past entries in the Ace Combat franchise have focused on non-sequitur laden, melodramatic dialog between protagonists fighting in fictionalized countries, Assault Horizon’s dialog and plotline habitually sidestep both irrelevance and military cliché. Pleasingly, the title’s real-world environments, ranging from Dubai, Miami, Paris, and North Africa are well rendered, with skyline scattered by the sporadic three-dimensional structure. The game’s soundtrack suitably sets the cadence of each stage, with songs which recall the haunting melodies of Black Hawk Down, or snare riffs and orchestral swells of The Rock. 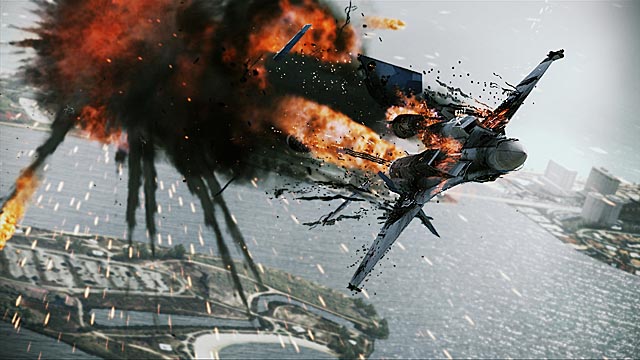 Beyond the title’s core campaign, there are a few treats awaiting sociable gamers. A decently sized collection of levels culled from career mode receive a few augmentations in order to accommodate cooperative play. Here, up to three players coordinate plans to watch each other sixes while taking down an increased number of hostiles. Meanwhile, the title’s competitive components have a few absorbing variations. Domination tasks players with securing control points, with teams earning occupation points when capturing a base. While the hovering ability of copters is essential for maintaining control of each area, the addition of menacing, fast-moving jets manages to intensity matches. Capital Conquest pits two, four-man team with destroying their opponents’ headquarters, with paths for bombing runs opened by the wanton destruction of enemy hardware.

Ace Combat Assault Horizon is a textbook example of how a waning franchise can be reinvigorated with a handful of shrewd innovations. By endowing the latest title with exhilarating mechanics, Hollywood-caliber action sequences, and a much-needed dose of diversity, the title comes recommended for any players who might have eschewed the last few entries. Capably, Team Aces illustrates that destroying millions of dollars of military hardware still provides gratification. Lets hope such thrills don’t become tarnished by the evils of indolence- that’s one antagonist who has proved to be particularly formidable. 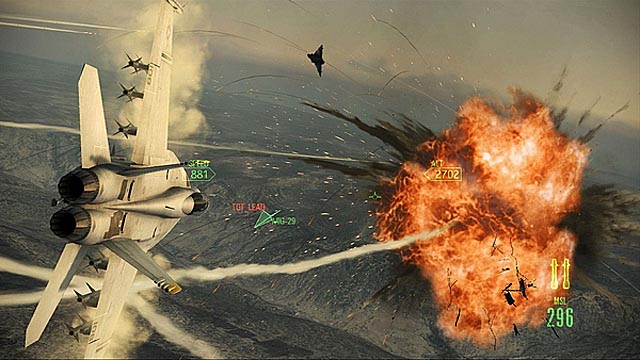 Previous: Guardian Heroes Review
Next: New Releases for the Week of October 23, 2011