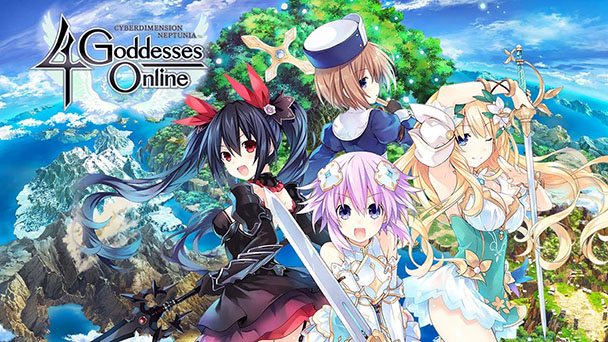 Amidst most of the twentieth century, the term, ‘simulacra’ typically implied inferiority. A painting based on a photograph was separated from its source material by two degrees, and subsequently would lose some of its essence across the series of two adaptions. But as anyone who has played an over-the-top sports games like Hot Shots Golf or NBA Jam knows, recreations that don’t obediently strive for authenticity can be a hell of a lot of fun. In the digital age, simulation might be better than the real thing, offering players the ability to execute a succession of eagles or slam dunks.

This kind of spirited reproduction is at the heart of the recent PlayStation 4 release of Cyberdimension Neptunia: 4 Goddesses Online. The Tamsoft-developed title imagines Compile Heart’s cherished quartet of anthropomorphic consoles playing one of the ersatz games the series sporadically references. Functionally, it’s primarily a single-player experience aiming to recreate the experience of a massively multiplayer online game. But it’s execution, it’s a rollicking romp that shatters the fourth wall with gleeful abandon. Parody-centered games are only as good as their core play mechanics. Pleasingly, 4 Goddesses is securely competent, destined to delight fans of the Neptunia IP. 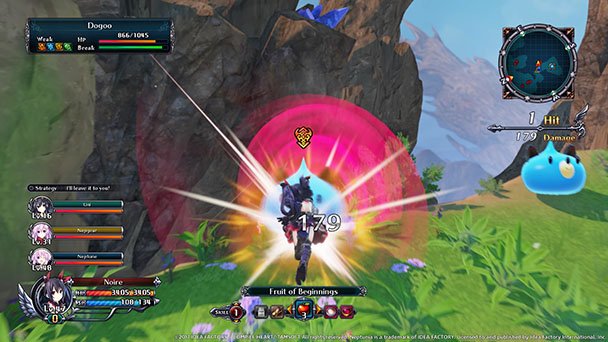 On the surface, Cyberdimension’s plot-within-a-plot seems rooted in the most formulaic cliché. Dialog establishes an enchanted realm called Alsgard, formed by a foursome of suspiciously reminiscent deities, highlighted by a magical tree reminiscent in form and function to Yggdrasil. Unsurprisingly, the great tree is challenged by a nefarious interloper, and the obligatory fragments needed to combat such evil are spread across the world, thus covering all of the fundamentals for an old-fashioned adventure.

But what makes 4 Goddesses Online work is the concept that Neptune, Blanc, Noire and Vert are exploring Alsgard through a MMO that’s still in beta, permitting the Console Patron Units plenty of opportunities to skewer gaming convention. Cleverly, they’re even aware of ‘players’ on the other side of the screen, occasionally remarking at the mysterious onlookers, and helping to solidify the sensation of a game within a game. Another opportunity for entertainment stems from the shifting of adventure classes, ensuring opportunities for uneasiness as each lead has to adapt to her new role. 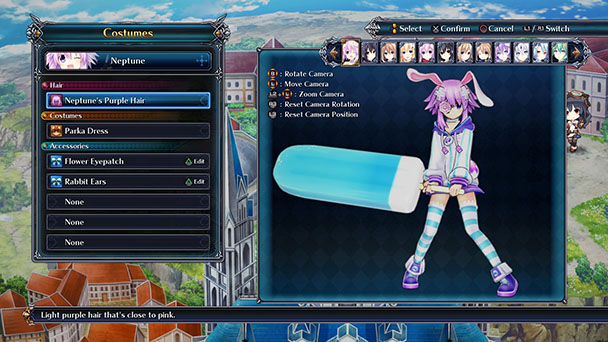 Like any Neptunia title, humor is rooted in a slavish devotion to fan-service. Whether it’s the abundance of Vert’s bosom or the franchise’s resident pettanko, there’s the predictable amount of puckish dialog. But what makes 4 Goddesses Online so amusing is the self-awareness of the CPUs. It’s one thing to grin at the deliberately low-slung camera, but it’s quite another to hear the girls acknowledge it and sheepishly concede series convention. This kind of cognizance makes Nep-Nep and the girls feel remarkably life-like, and it’s going to be interesting to see if Neptunia’s narrative will be able to return to its oblivious roots.

Although a playful conscious dominates the storyline, Cyberdimension is intent on letting its mechanics mimic MMO tenet. Largely, combat is competent, with the girls pummeling recognizable Neptunia opponents with real-time based attacks. There’s the requisite combos, guards, and with a bit of precise timing, a parry to confront adjacent foes. An arsenal of range-based attacks are easily dispensed, with a combination of the left bumper and the DualShock 4’s face buttons. Mirroring the ambiance of many massively multiplayer games, players won’t be surveying the screen for hit boxes or targetable body parts. Even when using the game’s lock-on system, it’s more prudent to flail away at enemies, as you vigilantly monitor your health meter for the occasional replenishment. 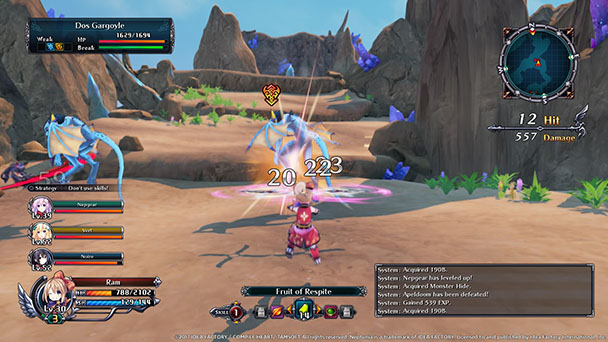 Some of this stems from 4 Goddesses’ artificial intelligence, which can be a bit uneven. Although each CPU adheres to her team role and confronts nearby creatures, pathfinding is uneven, resulting in the girls frequently teleporting to your location. A dearth of players before the game’s release meant the Goddesses’ multiplayer went untested. But know that playing the title solo deemphasizes the synergy between classes. As such, the intensity of boss battles is muted, with little of the frantic energy that forces complete cooperation between party members.

While 4 Goddesses Online’ combat is competent, the overarching incentive for progress would have used a boost of creativity. Sure, all the essential details are present and efficiently handled, with all town functions conducted through a scrolling-screen populated by chibi avatars. And while the girls make allusion to the rudimentary nature of guild jobs, where age-old pastimes like collection and killing dominate, the title still forces players to complete these straightforward assignments. On the upside, you can complete multiple objectives in a single run, which helps to make the title’s twenty-five hour play time avoid feeling padded. 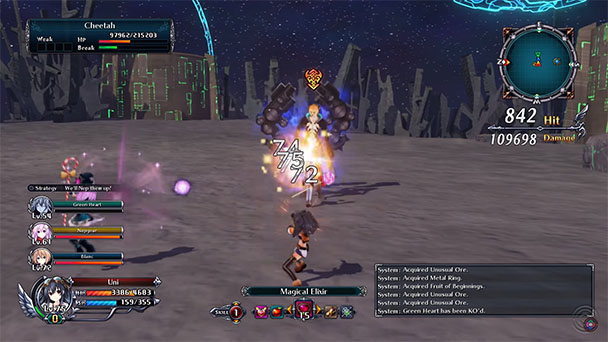 Visually, Cyberdimension’s utilization of the fourth iteration of the Unreal Engine allows for graphical opulence. Both the CPU units and Candidates look great, both in normal and HDD Form, moving with a new level of fluidity. While Neptunia games are often chastised for asset recycling, fans will be pleased to know that the game’s art has been redrawn, diminishing any sense of visual fatigue. On the downside, the game’s initial load time is quite long and 2D Live is no longer used for dialog sequences. Without transitional facial expression and the customary jiggle, the cinematics aren’t as charming; fortunately Idea Factory International’s localization is spot-on, capturing the mischievousness of the banter.  Credit should also be given to Erabareshi’s opening theme, “Picon de Metafiction” as well as Fuki’s closer, “Log Out Shinaide” which are some of the best music heard in the franchise to date.

Your average MMO aficionado isn’t going to praise Cyberdimension Neptunia: 4 Goddesses Online. Functionally, the game is a solid, but exhibits few of the qualities that mark an exceptional experience for groups of players. But the Nep Nation will undoubted adore Tamsoft’s self-referential storyline and how the CPUs are affectionately rendered. While previous titles have tried to endow the girls with personality, Cyberdimension Neptunia establishes a watermark that’s going to be difficult to top. 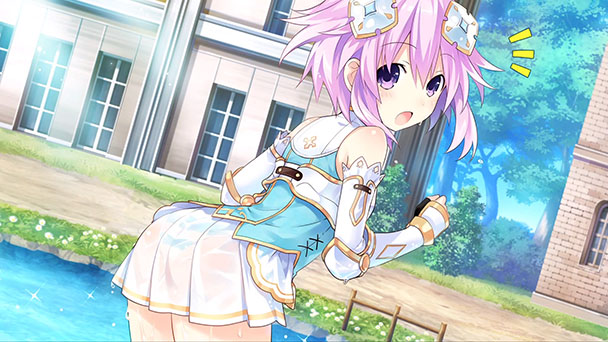 Cyberdimension Neptunia: 4 Goddesses Online was played on the
PlayStation 4 with review code provided by the publisher.

Cyberdimension Neptunia: 4 Goddesses Online
Platform:
PlayStation 4
Developer: Tamsoft
Publisher: Idea Factory International
Release date: October 10th, 2017
Price: $49.99 via retail or the PlayStation Store
Cyberdimension Neptunia: 4 Goddesses Online review
Amidst most of the twentieth century, the term, &lsquo;simulacra&rsquo; typically implied inferiority. A painting based on a photograph was separated from its source material by two degrees, and subsequently would lose some of its essence across the series of two adaptions. But as anyone who has played an over-the-top sports games like Hot Shots Golf or NBA Jam knows, recreations that don&rsquo;t obediently strive for authenticity can be a hell of a lot of fun. In the digital age, simulation might be better than the real thing, offering players the ability to execute a succession of eagles or slam dunks.&hellip;

Summary : Sure, a game within a game sounds like gimmick, but Neptune, Blanc, Vert, and Noire pull off the feat with panache and via the latter, a dominating DPS. .hack// and Sword Art Online, you’ve just been out-Nepped.